Hearing back from Heidelberg

I finally heard back from the University I’ll be spending my next year at! I really don’t know how to tell you how relieved I was to hear from them… I guess maybe it’s how you felt/will be feeling on results day. For me, going on a year abroad is such a huge thing, so I was desperate to start planning so that I could prepare myself as much as possible. Without knowing whether I had accommodation though, I didn’t even have a date I would be going to Germany, which made arranging things pretty tricky. It didn’t really feel like it was happening.

A few days ago though, I got an email saying that I have had a room reserved for me in student accommodation in Heidelberg. I was unbelievably excited, it takes the pressure off so much. I hadn’t even realised how much I’d been worrying about it until I heard back, and it was like I’d been holding my breath the whole of July without realising it. The email said I could move in at the start of September and gave me several deadlines for the 1st August, so after months of nothing really to do, suddenly it was frantic. 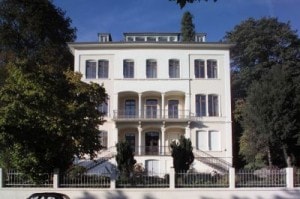 Max Weber house- the centre for international students, so I’ll probably end up there at some point

I’ve managed to choose my modules now, so I’m just waiting to hear back from the tutors to see whether they’ve let me in their seminar. The way it works is different to how my modules worked for English at Leicester, where all of the second year modules were compulsory and were a mix of lectures and seminars. In Heidelberg, there are seminars of varying ability, and those modules are purely seminars. There are also modules of just lectures, which cover different topics to the seminars. And there was so much choice.

This is one of the main reasons I would recommend a year abroad. You get so much more control over what you can focus on, you get to see things from a new perspective, and you get more time to work on skills and learn more about the things that interest you. In my second year of English there was a module each semester which focussed on Old/Medieval literature. (I’m not talking Chaucer kind of ‘ye and thee’ kind of English, I mean a language completely different from the one now: ‘Hwaet, ic swefna cyst secgan wylle’ basically means something like ‘Let me tell you the best of visions’ for instance, which completely baffled me). 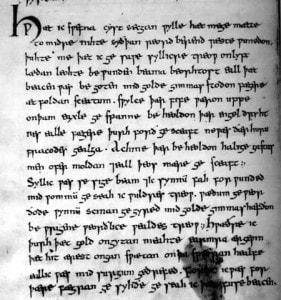 this is a manuscript of ‘the dream of the rood’, a poem I studied… apparently that is a version of English!

Leicester is special for offering this, as I don’t think many other universities offer this except Oxford and Cambridge, and a lot of people were drawn by this and really enjoyed the modules. However, those modules are a lot more language based than the other modules, and that’s a side of English I really struggled with. By the end of the second semester I was finding it hard to maintain my interest, so I’m really looking forward to learning about things I have chosen and remembering what it is about studying English that I love.

Anyway, the module list for Heidelberg came in a pdf file about 76 pages long, so that took a while to sort through. I’ve also been able to book my flight, which I’ve just done now. It made me feel sick with nerves- I’m actually going now! I’ve also managed to get onto a language course which is separate from the uni, so I’ll still be able to learn a bit of German before the term starts.

There have been so many tedious things to do. For instance I’ve needed to tell the bank I’ll have a 4 year account, not a 3 one, which required a letter I had to ask for from Leicester, and just things like freezing my phone contract- boring, annoying little details- are what I’ve been spending all my time on.

And I’ve been saying bye to my friends. I’m really lucky in that a lot of my friends are also doing a year abroad, but for those going to America, they’ll be heading off in the next 2 weeks. It’s been really sad saying ‘bye, see you in a year’. Luckily, with technology being how it is, I don’t think we’ll be falling out of contact any time soon, even with the time differences.

It’s all starting to seem a lot more real now…