Posted by Jayshree (Australia) in Study Abroad on August 23, 2013

I know I said my next blog would address my academic life, but I can’t help but tell you all about the most amazing couple of days I’ve had here so far. I signed up for a 2 day orientation trip to Rottnest Island, approximately an hour from Perth. I’ll start with the ferry ride there because that’s where the interesting part starts. So I’m very, very prone to getting travel sickness- more so in boats. I didn’t quite anticipate the journey I was about to endure, so I popped only one travel sickness tablet around 10 minutes beforehand. 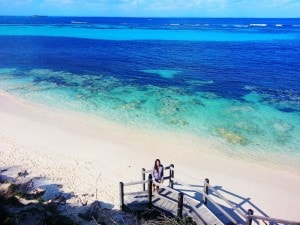 To my complete and utter dismay, the water was incredibly rough, and the boat was rocking from side to side. No, in fact the boat was literally flying through air at several points. After around 15 minutes of telling myself that I wasn’t going to be sick, I couldn’t quite take it, and had to (fly) run to the toilets (which as you can imagine weren’t exactly the cleanest). There I spent the remainder of the journey, I will spare the details. Quite embarrassing as I was the only one out of the 100 odd people on the boat that couldn’t handle it. But in hindsight, it’s all pretty funny.

So as soon as we arrived at Rottnest, we walked to our accommodation and settled in. We then got together in our teams (My team’s theme was the 60s, so, a lot of tie dye) and had to compete against each other in the first round of activities. This round was called “the iron gut challenge” and involved the tortuous consumption of several food items. You weren’t told exactly what the challenges would be and you were just randomly allocated one- I got landed with one called “swallow”, and little did I know it would be my worst nightmare. I went up, and the “ref” came to me with a tub of VEGEMITE (the Aussie version of Marmite, but 10 times worse). He spooned out an overflowing tablespoon of the stuff and gave it to each of the participants, and said whoever could swallow it with the straightest of faces would win. I was the last to do it and, of course, the only one who couldn’t get it down my throat. It was absolutely disgusting. I willed it to go down, but my throat was just closing up at the taste of it! I felt bad for my team but they agreed that had any of them done it, there would have been a similar conclusion. 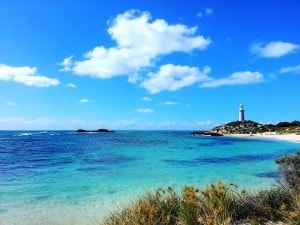 Anyway, our second task was a scavenger hunt on the island. We were given a list of things to do/find and send photographic evidence once we had completed the tasks. A few of the tasks involved finding a baby quokker (google them- they were EVERYWHERE), creating a human pyramid and finding the lighthouse. I decided to go for the task with the most value, to redeem myself from earlier. So I had to jump off the harbour and pretend to be drowning in order to be saved by a lifeguard. The latter part I didn’t do, just in case that could get me in trouble, but I jumped off the harbour and it was amazing! Also bear in mind that this is currently their winter, so the thought of anyone jumping off the harbour is quite literally insane. But the water, thankfully, was warm and the sun was setting around that time too, so it was quite beautiful. 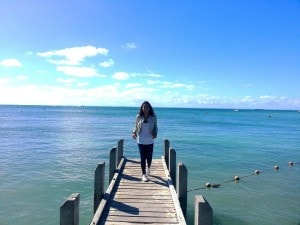 Since we had some spare time before we needed to return back, we went to the beach and played some volleyball. It was just incredible, the sky was pink/orange and the water was so serene. Then back to the meeting hall we went for the next round of activities. These were a series of trivia/challenges (that made me realise I need to brush up on my general knowledge). I went for the “best chat up line” round, and- can you believe this- won! I went with “Are you from Jamaica, cause you’re Ja-makin me crazy.” Hahaha, believe me it is definitely better when you hear it out loud with the attempted accent and all. Anyway I’m $30 dollars richer in coffee vouchers as a result.

After eating dinner, of course came party time, but I will refrain from elaborating. The next day we had the entire day for ourselves, and so my friends and I had a cycle around the island- by far the best decision we could have made. The beaches were absolutely breath-taking, and whilst it was extremely hilly, we all effectively got a work out by the end of it! 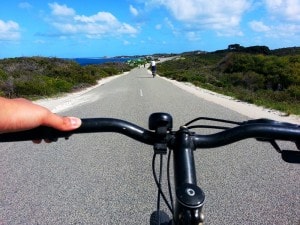 Just to finish up my ramblings, I’ll end by saying the ferry ride back was thankfully a very calm one. I popped two travel sickness half an hour before, and I was just fine.

Jayshree has now graduated from the University of Leicester. Hey there, I’m a third year law student currently on my year abroad down under at the University of Western Australia. Not only do I get to study pretty interesting modules such as Dispute Resolution and Human Rights, I’ll also be tanning up at the same time! Aside from studies I’m a keen musician, even keener at shopping, & I absolutely adore travelling and getting lost in new places. Read my blog to follow my experiences and take on studying law abroad.