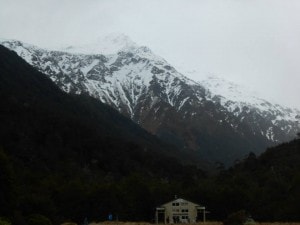 This is the hut and where we put up our tents… you can imagine how impressive the snow covered mountains seemed after a drink or two!

Thats right, I’ve been busy embracing all the mud and smelling a little bit grim… like a geologist should – I mean it’s all part of the fun isn’t it?! It wasn’t fieldwork though, I went on the tramping society’s annual bushball tramp 2 weekends ago. One of the many adventures since half term started 9 days ago – so much travelling, so much fun and too much to tell you about all in one blog so I’ll spilt it all into a few…

Anyway tramping, we drove 3 hours to Lewis Pass and then hiked 4 hours to Cannibal Gorge hut – keg of beer strapped to one tramper. Vodka, wine, gin and who knows what in everyone else’s bags! Crossed the craziest swing bridge hiking there and back, it was sooo wiggly. The type of bridge your mum would yell at you to get away from RIGHT NOW! 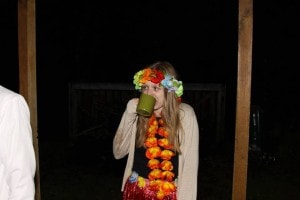 Ready to hula… right after I’ve finished my beer that is!

When we got there we whacked up the tents for the night which was pretty epic. Never camped being surrounded by all snowy mountains before… in fact I haven’t camped much at all but when in Rome and all that… After setting up we got down to business and on with the partying – complete with onesies and all sorts of fancy dress outfits. Being unorganised as ever, I ended up going to the $2 store the night before (not the £1 shop… say what?!). Only thing I could find was a hula dancers outfit and fireman’s hat… so hula dancer it was – the hat would’ve taken up valuable alcohol space and I fitted in perfectly next to the goat herder, fairy and parachuter minus her parachute anyway! Definitely one of the best nights I’ve had here so far… 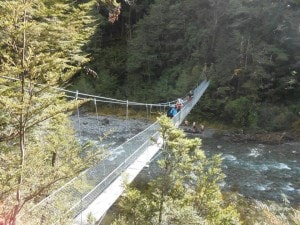 Super wobbly… and just a little bit of a drop below!

Monday, after I’d recovered from all the tramping, me and my friend hired a ‘rad red rental’ for the week. For our first adventure we went to explore the Banks Peninsula. It’s all volcanic there, with 2 extinct volcanoes – so pretty exciting stuff! We stopped in Akaroa, a little French looking town with the prettiest harbour ever (the harbours the volcano’s crater). There’s not a lot to do there but it’s nice to soak up all the scenery. Most people go to see the Hector’s dolphins but the sea was too wild when we were there – no worries though definitely got my dose of New Zealand wildlife later in the week in Kaikoura (whales, seals and dolphins but I’ll blog about that again!). On the way back from Akaroa, I took us on an accidental detour to Summit road – the one that runs along the top of all the hills. Best accidental detour ever! Epic views… and I know I always say everything was super pretty but it really really is.

One final thing, there was ANOTHER pretty big ‘quake up near Wellington last week sometime – magnitude 6.6! The Westpac stadium, where the All Blacks play, was even shut until it had been assessed but don’t worry it was opened in time for the big game on Saturday, more about that next time though… 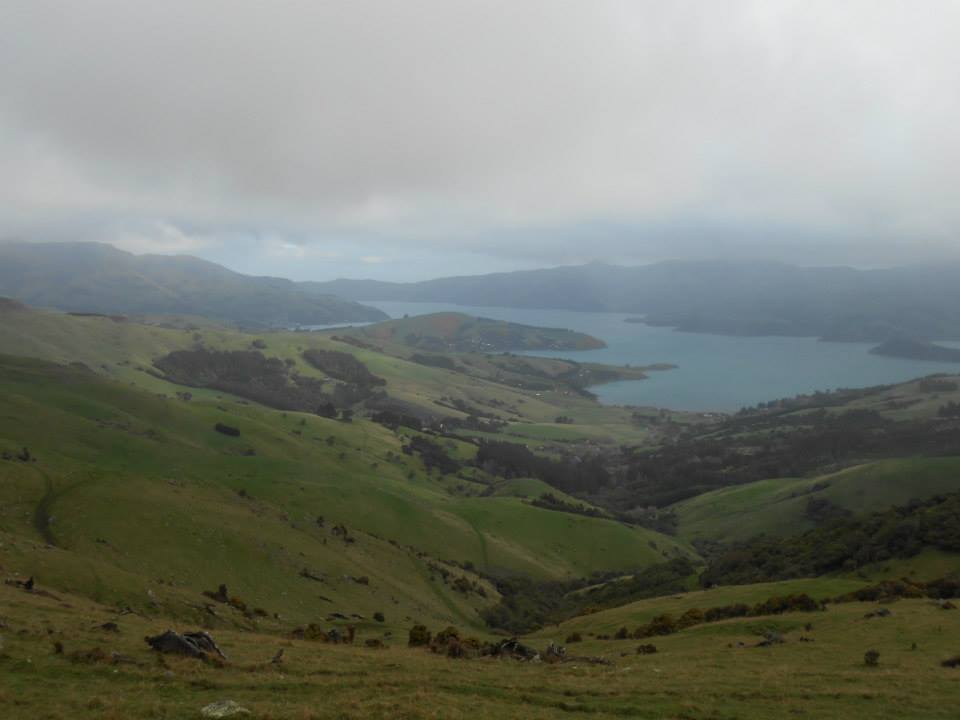 So the bays don’t look that impressive in this photo but they are! Would’ve been much better on a sunny day but it was still an awesome view…