Let me begin by introducing myself. My name is Hermon and I am originally from London. I am a third year Law LLB student currently on exchange at the University of Hong Kong. Having never been to Asia prior to this, I am ecstatic to be here.

This blog comes at an awkward time. I am sat indoors unable to leave the building due to the typhoon ‘Usagi’ that is supposedly hitting Hong Kong tonight. Although level 8 warnings have been issued for what has been declared the worst typhoon in 2013, I for one am very excited to possibly experience my first typhoon. Some may call me an adrenaline junkie. Fear not, I have stocked up on pot noodles and lots of coffee to last me a good few days. After all, that’s all you need to get by in Hong Kong.

A lot has taken place since my arrival so I will try my best to fit in as much as I can. Arriving in Hong Kong was not as difficult as I had originally anticipated. After a painfully long flight and numerous problems with the reclining chairs, I had arrived in Dubai at the stop over where I met up with fellow exchange student Rob. It was only then that Rob highlighted the fact that I had mistakenly brought the courier’s note instead of the visa permitting me to study in Hong Kong. Worse still, I had thrown the envelope containing the visa in the rubbish bin of my bedroom in London. This is what happens when flying without your parents for the very first time. At least this is what I have told myself. After a moment of panic, we soon realized I could enter Hong Kong on a travel visa permitting me to remain for 180 days, i.e. February 2014. I decided to inform my parents of my unfortunately embarrassing conundrum and they thankfully agreed to send over the visa that I had disposed. Luckily, the bin containing the visa had not been taken out just yet. A lesson learnt!

Getting through immigration was surprisingly simple, a paper stapled into my passport, et voila I was in! I don’t know why I was so worried. Upon arrival, we were greeted by Rob’s ‘buddy’ Edgar who went out of his way to help us figure everything out. To elaborate, the University runs a scheme pairing each International student to a local student who we refer to as our ‘buddy.’ Having only just met Rob for the first time and when it was so late at night, Edgar had been incredibly kind. Not to mention carrying my heavy suitcases for me, taking us to our accommodations and of course humouring us along the way. 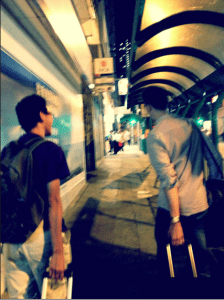 Edgar and Rob dragging the suitcases

My first thoughts on Hong Kong: ‘I am most definitely going to love it here’. Late as it was, the brightly lit skyscrapers surrounding our every footstep blew me away. Coming from London, the city’s vibrance never ceases to both fascinate and excite me so coming to Hong Kong just turned my excitement up a few notches! It is far more exciting than London. Further, the city retains a very Western feel having named districts, streets and buildings after those in London, the UK and America. To name a few, we have Chancery Lane, Aberdeen, Soho and Hollywood Road. In that respect, I suspect I am not too far removed from my comfort zone.

My accommodation is called Patrick Manson (PM) accommodating 3 floors of female exchange students and 1 floor of local male students, costing me less than £1000 in rent for the year. This beats my previous Leicester accommodation, in fact saving me over £4000 and meaning that my student loan can actually cover something other than a fraction of my rent. But don’t be fooled into thinking housing is cheap here because rent prices are outrageously high. Luckily, the University heavily subsidises rent in student accommodation.

The PM building is seemingly old and a little far out from the Uni, specifically taking over 30 minutes walking fast downhill to get to the closest end of campus. I share a room with two wonderful girls called Santa and Adjoa who both study Law at the University of Warwick. 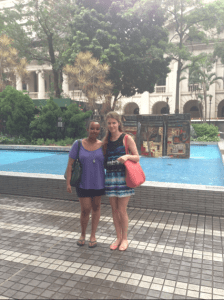 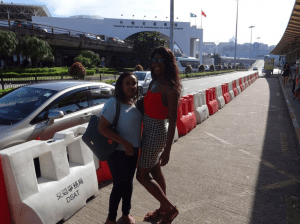 Adjoa and I in Macau

I was very lucky to get these two girls as my roommates because the idea of sharing a room with people genuinely terrified me, but so far I have enjoyed the experience. A bedroom is not the only thing I share, we have two shower rooms on each floor with 4 cubicles and the same with the toilets. The problem lies with what is supposed to be a kitchen. There are roughly 43 girls on my floor and we have to share a very narrow ‘pantry’ containing just 2 fridge/freezers, a tiny electrical hot plate which warms up, a hot water dispenser and of course, a rice cooker that I still don’t know how to use! On the plus side, I came here to experience a culture change so I am grateful for these insights into the Hong Kong culture.

Speaking frankly, Patrick Manson is not one of the best accommodations on offer – for instance, numerous people have found giant cockroaches and even lizards in their rooms, huh? There have also been rumours of bed bugs which is no surprise since I had been waking up to new bites on my skin every day. Furthermore, our room was incredibly tiny, proving problematic for three ladies! 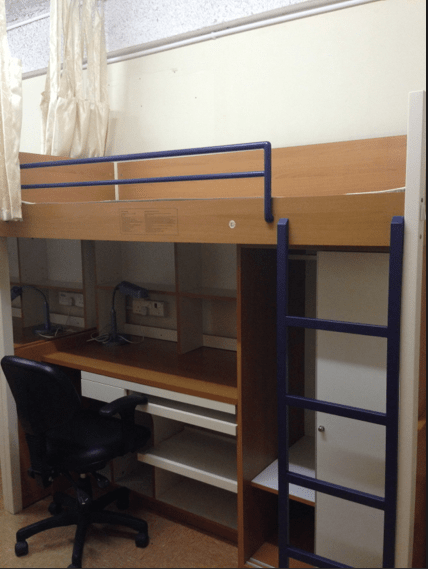 One of the two bunk beds in our tiny bedroom

Luckily, we were able to move into one of the opposite rooms which was a lot more spacious and bed bug free. Hong Kong is extremely hot and humid so sleeping with the air conditioning on is a must! This also eats up your money very quickly. Doing the laundry is a problem with only one working washing machine and dryer for ALL PM residents.

PM is located in Pokfulam on the Hong Kong Island, which is a residential area. That being said, there is only one local shop stocking very few essentials – this is why I live on pot noodles. However, all the students at PM have been lovely making everything that much more manageable. Plus, we have direct access to many buses which take you to the main urban areas in HK.

Week 1 was incredibly hectic trying to find our way around. Day 1, Rob and I had walked up and down steep hills for around 6 hours in the ghastly humidity trying to discover the local area. Having decided we had sweated enough for the day we took a cab to the University campus, as seems to often be the case in Hong Kong.

The campus is enormous, not simply due to its length but because of its numerous layers which does not make finding specific buildings an easy task. The reason for this being that the campus sits at the foot of the Mountain Victoria Peak, which ranges across the Hong Kong Island, thus resulting in the campus being so hilly. Nevertheless, walking around campus is exciting as there’s a multiplicity of routes to be taken as well as some beautiful spots to see on your way to class.

This is the view from the centennial campus…

A few more images of the campus: 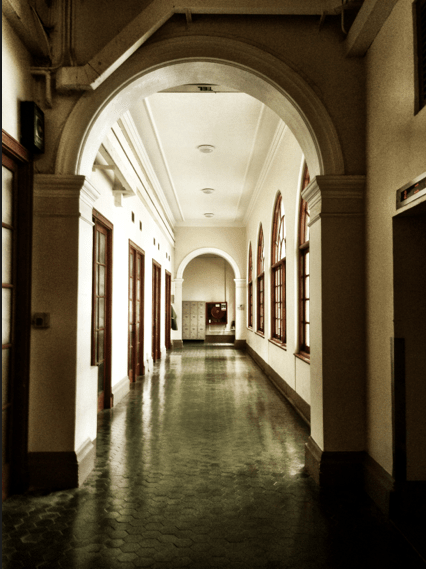 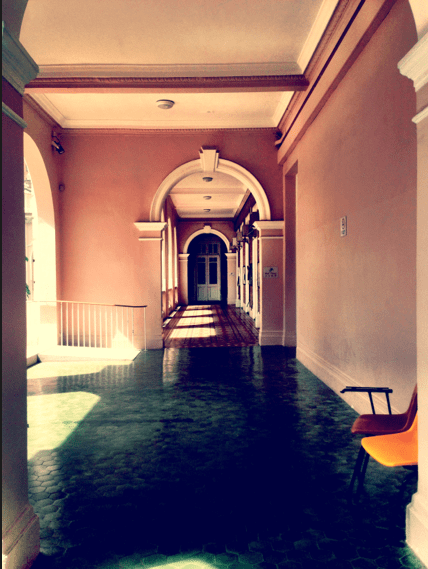 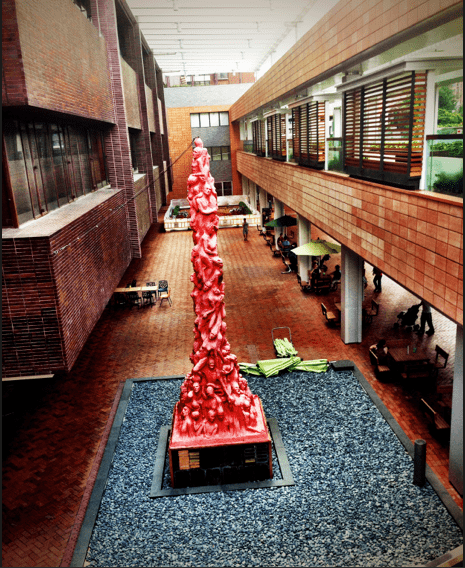 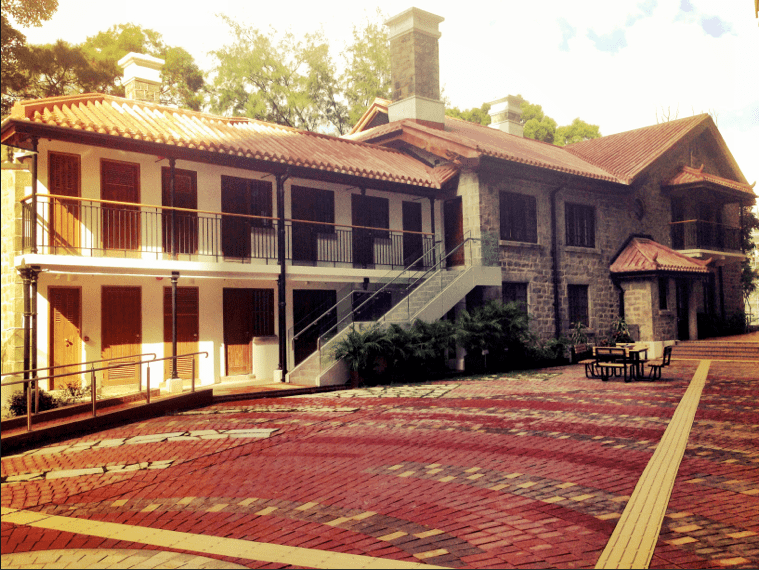 One of the University Bookshops

We later met up with our good friend Jesi, who had been my flatmate in my first year at Leicester so it was exciting that the roles had been reversed, and I was now in her city.

Jesi took us to an underground restaurant full of locals, with the menus all written in Cantonese. This was the true HK experience! The food was deliciously flavoursome and it didn’t matter at all that we had mixed both sweet and savoury into one meal. We then walked around some backstreets to find a delightful string of bars where another friend, Jeremy, from Leicester joined us. We shared the biggest brain freeze I have seen in my life!

Before this, we had taken the Starr ferry over to the harbour in Kowloon where a lights show is held every evening at 8pm, costing about 17p. The buildings illuminate in their multicolours as they dance along to the music played at the harbour. It was a beautiful sight. 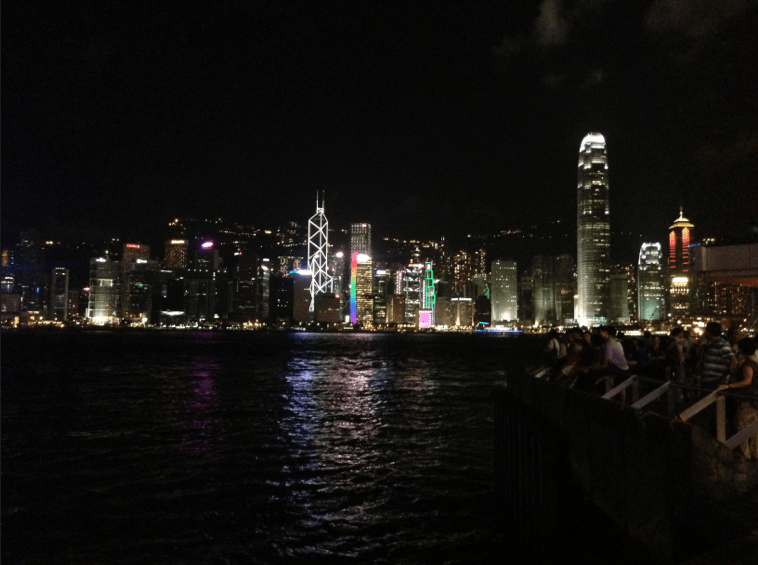 The Harbour Lights Show in Kowloon

HK lights up at night. The countless dangling signs and shops irradiating the streets offer a spectacular sight to newbies in the city. I could not stop taking photos. With Hong Kong consisting of islands, everything is built upwards to create more space so you’ll find yourself constantly looking upwards, which results in me continuously bumping into people accidentally.

CEDARS (Centre of Development and Resources for Students) – an organisation at the University that takes care of student interests – had arranged a group hike up the Victoria peak which was possibly one of my most challenging walks yet! Beginning the climb midday in the humidity without a water bottle and having not yet acclimatised to the steep hills this proved to be an incredibly difficult walk. 3000m later, we had reached the top wet from all the sweat and having made many new International friends. To my surprise, there were shopping malls dotted around the peak. We took many escalators to reach the highest point of the peak. The view was breathtaking making the hike worth it. We stayed to watch the sunset and viewed the city at night. 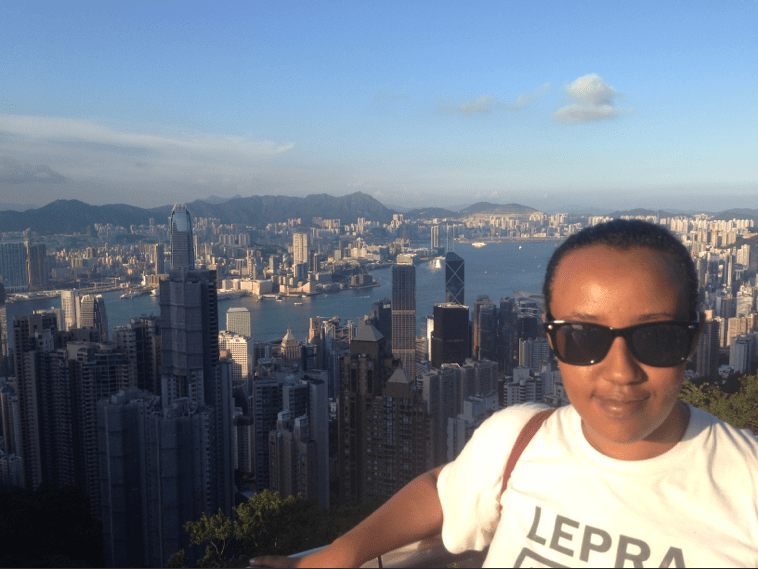 The view from the peak

One thing I cannot seem to get away from is CANADIANS! They form a huge percentage of the exchange student population at the University of Hong Kong. This is also true of Law students at the University of Leicester. However, Canadians have a similar sense of humour to the British and the friends I’ve made here are funny so I don’t mind. There is a vast range of International students also on exchange here at the University, enabling me to have made friends from all over the World. This has been particularly beneficial, enriching my experience by teaching me about other cultures beyond that of Hong Kong such as American, Australian, Scandinavian, etc.

Hong Kong itself is remarkably international. You will always see Westerners and expats on every street easing the transition to a Chinese state. The language barriers between the locals and myself have proven difficult at times, especially when paying for things at shops. My attempts at learning Cantonese have been appalling; with my current inability to stop the minibuses 4 weeks in! Although, I can tell you my name and thank you…

The new motto for the year: When In Hong Kong…