Peace in the Mystery Machine 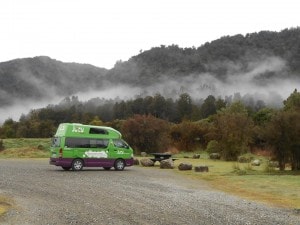 The Mystery Machine in all its glory… can even see where the ‘land of the long white cloud’ gets it name from.

First of all, I hope you all had a super peace day last Saturday – I know I did but more about that in a second. Secondly, spring is finally here in the land of the long white cloud…and there’s so many little ducklings waddling around on campus and daffodils in September – what’s all that about? The only downside to it all is that it means exams are now less than a month away and that’s scary times indeed.

Anyway, back to peace day… I mentioned that I was planning to head to the west coast in a few weeks time in my last blog but being as impatient as ever a few weeks turned into a few days, so I ended up there last weekend. Two other geologists came along for the ride and we hired a campervan… it kind of resembled the mystery machine off Scooby doo but either way, I felt like I was living the hippy dream – spending world peace day in a campervan, in the middle of nowhere, favourite peace earrings in, bottle of beer in hand, blasting ABBA, Greenday and the odd Christmas song (only 88 days to go). Perfect! 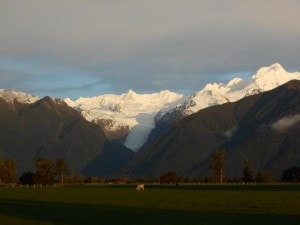 This is the Fox glacier just as the suns setting… looks like it’d be pretty fun to sledge down from this distance.

We managed to fit in seeing tonnes of things there from the Fox and Franz Josef glaciers, gold panning in Ross to seeing kiwis (nocturnal, flightless birds that are New Zealand’s national symbol) in the Franz Josef wildlife centre and Shanty town, which is an old gold mining town. The glaciers were super impressive (even made me come home and think about starting my latest past climates assignment). You can’t go right up to the glaciers without a guide though because there were some major accidents a few years ago.

Oh and not to forget all the rocks we saw while travelling around too – Castle Hill’s limestone tors, where they filmed some of Narnia and Punakaiki’s pancake rocks and blowholes… 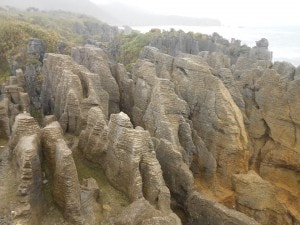 You’re meant to be able to see faces and what not in the pancake rocks… but I must have a really bad imagination because the only thing I can see are pancakes!

…and how cool is it that we crossed over from the Pacific plate to the Australian plate? I’ve been doing so much about the Alpine fault and plate boundaries down here in my geohazards and dynamics course so it was ace to actually see some of the places I’ve learnt about. We even drove along the dreaded state highway 6, which if you listen to my hazards lecturers is a death trap waiting to happen and for a million and one different reasons – but we survived without any rock avalanches, major earthquakes or floods so all is well. 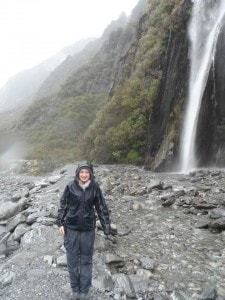 The wild, wild west coast… I’ve had Katy Perry’s ‘California Girls’ stuck in my head ever since I got back. Can definitely tell she’s on about a different west coast though.

One final thing about the west coast – When it rains, it rains! I’m talking rain from every angle and buckets of it. In fact the entire place would be better known as the wet coast rather than the west coast. It wouldn’t really make the slightest difference if you jumped straight into one of the  rivers, you’d be just as wet/dry as before. It’s all to do with southern Alps creating a rain shadow, meaning they can get well over 6000mm a year…so if you ever happen to be visiting, remember your waterproofs because to see anything worth seeing, chances are you’ll get soaked but it’s all part of the fun though, right?

I’ve no more major trips planned for a while now with revision and other work taking over… but in just under 6 weeks time, it’ll be my summer holidays for 4 months. That means I can finally head up north and check out all the volcanoes and I REALLY can’t wait for that! 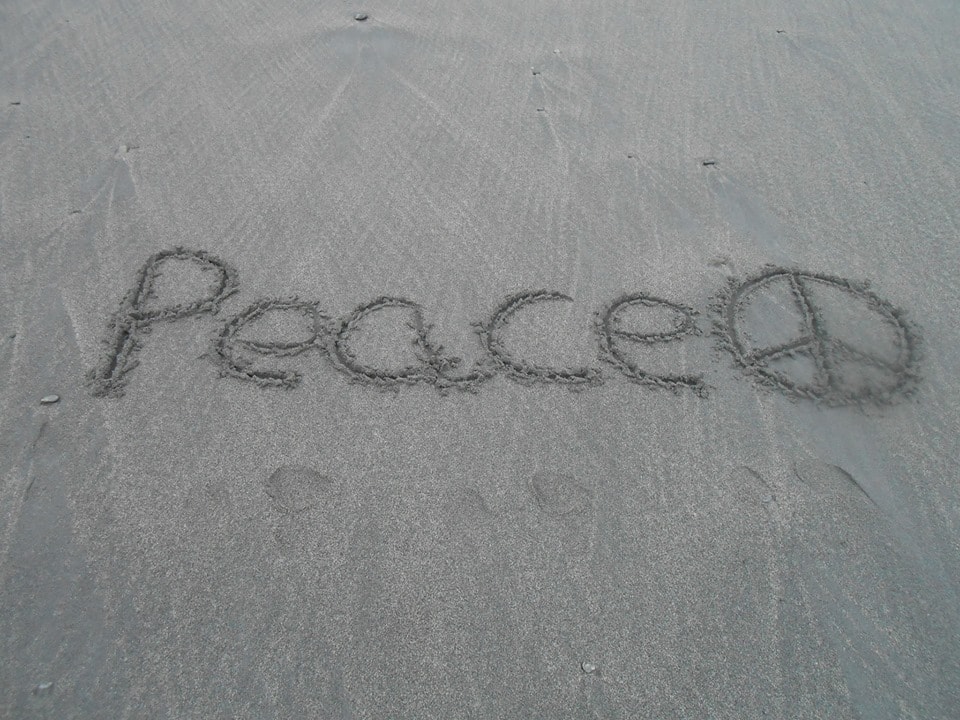 Peace? What else to write on the beach on world peace day!

2 responses to “Peace in the Mystery Machine”