One semester done, one to go… 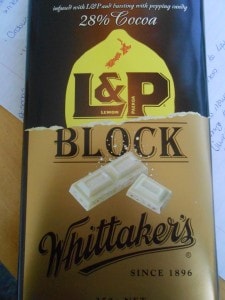 L&P even do a chocolate version with Whittaker’s (a big chocolate company here)… it’s the only thing getting me through revision today. Well, that and the thought of a vodka and L&P afterwards.

I’ve no idea where the last 2 weeks have gone since my last blog but first semester is now done, finished, over!  How quickly has that gone? I’m sat here sunburnt and hungover, flicking through all the pictures I’ve taken so far and can’t believe it’s already been 3, nearly 4 months. Only 4 exams left and then 4 months of doing absolutely anything. You’ve literally no idea how excited I am…

Before all that though, I figured I should probably get round to telling you a bit about day to day things here in the garden city (another of Christchurch’s many names, can see why walking through the botanical gardens lately). First things first – uni. My timetable is ace, couldn’t have asked for a better one. I finish 1 every Friday and then I’m not in until 8 on Tuesday mornings. Lectures that early are such a killer but it’s well worth it for a 3 and a half day weekend. I might’ve mentioned them before but I’m doing 4 modules this semester – geodynamics and geohazards, past climates and glaciations, engineering and environmental geology and an astrophysics one.  Have to do quite a bit of work for all of them every week because we get so many MEGA assignments. On the upside though if my exams go really badly, it means they’re only worth either 40/50% of my overall module mark.

Next up shopping… I think I’ve finally sussed out what’s what shopping wise. We’ve got a supermarket called PAK’n’SAVE which is basically Lidl, Countdown which is Asda’s equivalent and then New World which is probably more like Sainsburys. Same goes for the clothes shops. I’m still searching for a shop that I love as much as River Island! Busy loving all the jewellery shops here though, there’s so many and they sell such cool, quirky stuff – even managed to find a dinosaur necklace. So, no prizes for guessing who’s coming home with half a suitcase full of earrings and what not… 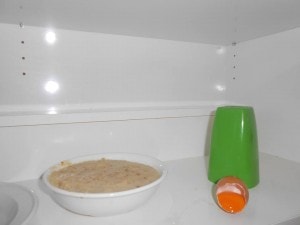 … and if all else fails and I’m sat around bored, I can always count on my crazy Chinese flatmates to leave me a little surprise in the cupboard. This sat there for days and trust me when I say the picture doesn’t capture how grim it was… still not sure what it is or what the egg was for!

Now for food – most stuffs pretty much the same, although I’m convinced they put twice as much sugar in everything because its so sweet. The curry we had the other night even tasted pretty sugary. Talking about sugar, they’ve got their own ‘world famous in New Zealand’ drink – L&P. It’s AMAZING! It’s hard to explain how it tastes, its like lemonade but not lemonade… either way, I’m going to miss having a vodka and L&P once I eventually head home.

When I’m not busy working, sleeping, shopping and eating there’s usually something to do around campus. I even tried yoga for the first time ever the other week – wouldn’t recommend hungover though (that’s another thing that’s different to Leicester too, the gym here is free for students) …and as usual in halls, there’s usually some kind of party happening somewhere. This weekend I went to ‘tea party’  which is the biggest uni party of the year but I’ll save that for another blog!

One final day to day thing, that I can’t help but mention – earthquakes. Ok, so they’re not major ones all the time but still geonet is constantly updating twitter about them. Last week there was one pretty close and big enough (magnitude 4.6) for most people to feel the shaking. If it wasn’t before, my Christchurch experience is definitely complete now! One of the volcanoes (White Island) up on the north island has also had its alerts upgraded twice this week – got to love this crazy little country…