In true American style this weekend me and a couple of my flatmates embarked on our first road trip. After studying the American convention of family road trips in my American Popular Culture class, I was both excited and daunted at the prospect of a potential eight hour car-ride to the Tucson, Arizona. The road trip is seemingly something of a rite of passage for Americans, having been immortalised and somewhat romanticised within U.S. literature and film, offering independence and an opportunity to buy into the cultural narrative of travel and expansion that largely characterises America as a sovereignty. Thus in the (kind-of) footsteps of Sal Paradise, we made sure the tank was full, the air-con worked and set off in our newly-rented Chevrolet towards Arizona. 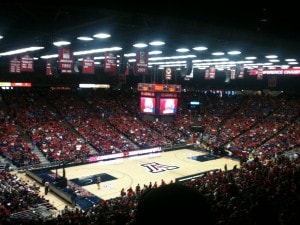 500 miles of American freeway stood between our temporary home of Long Beach, California and our home for the weekend, Tucson, Arizona, an 8 hour journey that saw us only cross one state border. Since I’ve been living here, it’s been abundantly clear how difficult it is to travel around cities, never mind the country as a whole and the necessity of a car is clearly apparent. The fact that it takes so long to visit a neighbouring state is frustrating to say the least, especially since I haven’t built up the courage to try my hand at driving here yet. Therefore, the two of us Brits in the car let our American counterparts take the initiative, which actually let me wondorously watch as the passing surroundings transitioned from the city of Long Beach, to the coast of Southern California, the desert terrain of the Mexican border and finally, the mountainous dryness of Arizona itself.

Although only the next state over from California, Arizona is an entirely different ball-game. We met up with another University of Leicester  student who has been spending her year abroad at the University of Arizona, who was kind enough to show us around her home for the year. Whilst Long Beach has more of an urban city vibe, slightly sprawled out and extremely diverse, Tucson is definitely more of a college-town. Everything gravitates around the University and it seems as though every other person you pass on the street is a college student. The influence of the University over the town became perfectly clear as we someone managed to find ourselves in the Uni athletics stadium. Apparently there was a basketball scrimmage taking place (a preseason game played between the University squad), which gave me my first real experience of American sports. The game was a sell-out. Fifteen-thousand people packed into the McKale Center, all sporting Arizona University attire, proceeded to stand (and turn towards Old Glory) for the American anthem. That last part was one of the most surreal moments of my time here. Since this was only a college pre-season scrimmage, I can’t imagine what a professional NBA game will be like. Bring on the Lakers.