Kiwis, no not the national bird this time – the people. Imagine a stereotypical Kiwi… you’re probably thinking chilled out? Really laid back? Might even be thinking that they’re pretty much like Australians? Well, you’re probably right, although not about the Australian thing. I learnt that one pretty quickly and can probably list you a tonne of reasons why they’re different now and of course, why Kiwis are MUCH better. Think I can even tell the difference between a Kiwi and Aussie accent now… well kind of.

I’ve been busy practicing my Kiwi accent for when I come home this week – procrastination at its finest. Anyway, it’s all about saying ‘yis’ instead of ‘yes’ and ‘pin’ instead of ‘pen’. Then ‘pigs’ become ‘pugs’ and ‘fish and chips’ become ‘fush and chips’. Whack in a few ‘sweet as bro’s and I’m going to be sounding like a Kiwi in no time eh? That’s another one too eh, you pronounce it ‘ay’. 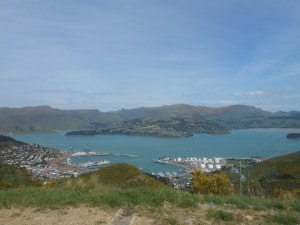 Could sit up there all day with a few beers, shame I’ve got exams really…

Apart from practicing my not so Kiwi sounding accent, I’m still busy procrastinating around Christchurch whilst I’ve got exams on (1 down, 3 to go!). UCSA (the student union) had its major end of year, 2 day party, 2 weekends ago now – pre tea party and tea party. Its all outside and kind of like a small festival type thing I guess. For tea party everyone dresses up and starts drinking at stupid o’clock because it finishes 6ish at night. I went with a few geologists, all dressed in caution tape, hi vis jackets and gum boots (the word for wellies here). Such a good day, although I could’ve carried on partying all night – where’s Red Leicester when you need it?

Finally been for a proper swim in the Pacific too – so cold and the waves were so big. Must remember to put learning to surf on my list of things to do while down here. Been wondering up the Port Hills again as well. The view of Lyttelton and all the bays never gets old, especially when the sun makes the water look all sparkly. Managed to find a little Irish pub in Lyttelton itself. So cider, sunshine and looking out over the harbour it was – epic! If you don’t think about all the revison that I need to do that is…

Booked flights to go travelling around the north island with 4 friends today, so that’s something to look forward to after stressing over exams. Think the plan is to head to Auckland, Tauranga, Rotorua, Taupo and who knows where else – should be epic!  In fact you might even say it’s going to be sweet as bro! 😉

One response to “Sweet as bro”