Sorry it’s been a while since I’ve blogged. Since my last blog I have taken every opportunity to have fun and have indulged in a range of activities. When I haven’t been gallivanting around I’ve been trying to cobble together an essay, in German, about the English legal system and the constitution. Any English law students will know how complicated it is to explain the intricacies of our system: especially to a group of students who can proudly present their respective constitutions in a codified document.

Now the apologies are through let’s get to the real business. Christmas is a great time of year to be in Germany. Back in England my family don’t really ‘do’ Christmas. We embrace a lot of the traditions and most years we go to Church on Christmas Eve (despite not being Christian) to try and experience the true Christmas spirit. Ultimately we find it a bit of an anti-climax. Outside of my immediate family my relatives are dispersed throughout all the continents. I think this contributes to the lack of our enthusiasm – there’s no feeling of a gathering or coming together. So I have been genuinely excited to be in Germany this year for the festive season; and I have not been disappointed. There is a sense of community as people gather in the Christmas markets to eat, drink and be merry. I was on the metro the other day, returning from University, and passed the stop for the Frankfurt Christmas market. I encountered a heart-warming sight: a group of elderly men bundling into the carriage, red-faced from the cold and maybe one too many Glühwein (mulled wine), singing German carols.

Like a fellow study abroad blogger I went to the Nürnberg (Nuremberg) Christmas Market. It is world-renowned and widely considered to be one of the best in Germany. After a tour of the city centre we made our way to the market for our dose of Glühwein. Some of us even tried the Glühwein with a shot of rum. … It really warms the cockles! After a bit of wandering around it was impossible to avoid the temptation of a sweet/pastry. The smell of sugary goodness hangs in the air enticingly. I decided to buy a small packet of Zimtsterne (cinnamon star cookies). They are gorgeous! If you encounter them – perhaps if you go to the German Christmas Market in Birmingham or Manchester – make sure you buy some. 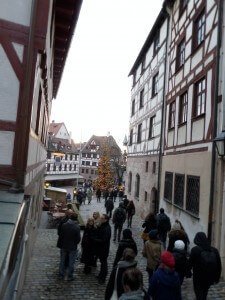 The day after we visited Würzburg and did another city tour. It is a beautiful city with a magnificent Baroque palace. Unsurprisingly, we visited the Christmas market afterwards. I liked it more than Nürnberg because it is tastefully decorated, in an impressive square, and there’s space to move. The reputation of Nürnberg means that it’s heaving with people. This time I decided to try Schupfnudeln (a type of dumpling) with sauerkraut and diced ham. It is basically the whole of German cuisine in a pot! 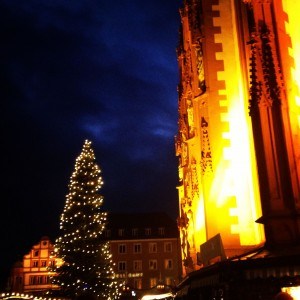 Last, but by no means least, is the Frankfurt Christmas Market. I spent almost 4 hours with my friends eating and drinking there one evening, and I intend to go again soon. The Frankfurt speciality is Heißer Apfelwein (which translates as hot apple wine but it’s more like hot cider). It sounds like something that shouldn’t taste nice but it does! I can’t wait to try it again. 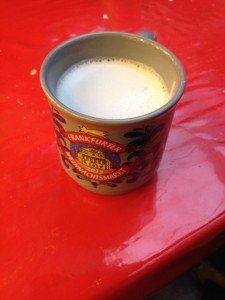 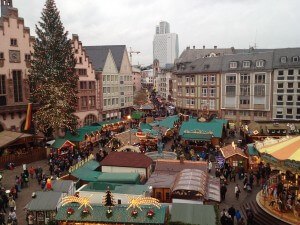 I realise that this blog has largely centred on food and drink. I guess it reflects how central it is to the Christmas Market culture. It is a foodies’ paradise!