The lack of activity on my blog recently is due to the fact that the semester is coming to a close, which obviously means exams and deadlines. However (without wanting to jinx anything, since I still have one exam left) I have to admit that I’m finding the work here a lot easier than back in Leicester. Whilst the workload is lot heavier, most of it is easier and the marking generally more generous. I believe this may be due to the fact that students take a wider range of subject classes, which means few professor’s expect every student in their class to be an expert in the field. For example, the History class I’ve been taking this semester includes a lot of students who are studying to be teachers and simply have to pass certain classes to fulfil their degree requirements.

Whilst this may be somewhat counterproductive since I’m in the last week of term, I might as well write a bit about the classes that I’ve been enrolled in for the last few months and give you an idea of what classes in America generally consist of:

California Cultures: An examination of how processes like conquest, labour, ethnicity, migrations, and economics are played out in the cultures and communities of California from its origins as a region of diverse indigenous populations to the contemporary period.

California History: Explores the key figures, event, and socioeconomic forces that have shaped California history from the first indigenous migrants to the twenty-first century by placing California’s history into its larger national and global contexts.

Exploration in American Popular Culture: Analysing the sites, personalities, products, and expressions of American popular culture after World War II through an exploration of how Americans from a broad range of backgrounds made sense of the postwar world through consumerism and political practices filtered through new commercial forms.

Comedy in the U.S.: An exploration of the historical development of comedy, selective of the United States using methodologies drawn predominately from literary interpretation and film criticism in order to analyse the nature of comedy and its impact on the culture, politics and history of the country.

As you can see, I chose to take classes that were very much rooted in California, simply in order to get to know my new, temporary home a little better, in addition to the fact that they would be somewhat relevant to my dissertation topic. While I’ve enjoyed these classes for the most part, as I mentioned earlier, they are significantly less challenging than the modules we take at Leicester. A lot of the classes are focused on visual media, which means film or documentary viewings are extremely common, which adds to the relaxed nature that completely lecture-based classes already possess. Furthermore, the methods of testing here are a lot gentler – I had an exam last week that was 40% multiple choice. God, I love multiple choice. The exams themselves are no where near as stressful as ours back home. All finals are taken in the classroom that you normally have lessons in, on the day that you normally have said lesson. My last exam on Wednesday is even open-book. Whilst I’m making the most of these beneficial conditions, I can’t help but worry about how fourth year back at Leicester is going to send me crashing back down to earth in the panicked struggle to make the hallowed 60% – a far cry from the grades I’ve been getting in America. 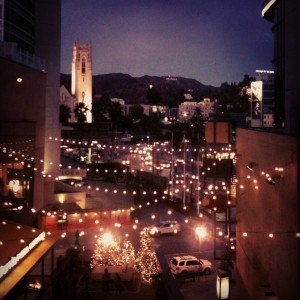 Since that was quite a dull post, here’s a photo I took in L.A. last week. That’s the Hollywood sign right at the back (you have to look reallllly closely)