Okay, so it’s been a fair while since I promised to finish this two-part blog post, so apologies for that. My excuses are that I’ve been fairly busy Uni-wise with the new semester starting and, perhaps more culpable, I turned 21 at the end of January so have been making the most of that, having not being able to pop out for a pint or two for the last five months. But I digress. So here’s the rest of my San Francisco travels…

Having left my last blog post concluding on my slight infatuation with the hipster-hang out that is North Beach, I’ll move on to the more well-known tourist spots that make San Francisco such a popular holiday destination. My flatmate and I couldn’t turn down the opportunity to cross one of the most well-known bridges in the world, and thus we hired out a couple of bikes and cycled the 2,737 metres over the bay. Admittedly I wasn’t in the best shape of my life at the time, but I still consider myself a fairly fit individual, however the ride was extremely tough, not least because the bridge on the way over was slightly uphill (which was definitely not mentioned in the tour guide). Nevertheless we made it over and managed to catch the sunset on the return trip, which will undoubtedly be an experience I remember for a long, long time. 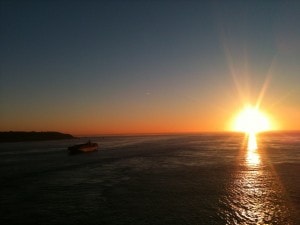 Sunset from the Golden Gate Bridge

Arguably the second most famous tourist attraction in the city is Alcatraz Island, often referred to “The Rock”, as noted in the 1996 Sean Connery film of the same title. For thirty years (1933-1963) Alcatraz acted as one of the most high-security prisons in the country, housing infamous criminals such as Al Capone and Mickey Cohen, however is now open to the public as a National Historic Landmark. We took an audio tour around the island, which was an extremely eye-opening lesson in American history, before taking the quick ferry-trip back over to mainland San Fran. 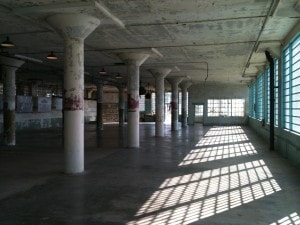 Ultimately, I loved San Francisco and would have to admit it’s  one of the most exciting cities I have ever visited. In fact, it was almost a disappointment to have to return to southern California. First-world problems, huh?