Happy Year of the Horse!

Secondly, Happy belated Valentines day. I hope that you all had a wonderful day!

Following a week and a half off from University for the Chinese Lunar New Year, I am back and ready to commence work for this semester. This is the year of the horse, whereas those born in 1993 like myself were born in the year of the rooster. Happy Year of the Horse!

For the past month the streets were illuminated with the colours RED and GOLD. Red signals luck, as well as embodying all the chinese fortunes including wealth, prosperity, good health, etc. 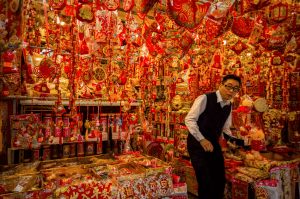 Moving out of Patrick Manson and into Residential Colleges has enabled me to expand my cultural horizons. Having Hong Kong locals and Mainland Chinese girls on my floor has taught me a great deal about the two cultures which is precisely what I had hoped for in coming to Hong Kong. As well as this, I have been learning Cantonese to help me make the most of my experience. Cantonese is not widely spoken in China but is the main language in Hong Kong. In fact, Mandarin is so rarely spoken by the locals that I have been told they dislike it being used in Hong Kong. There surprisingly remains a huge English Cantonese language barrier so learning the language is in my best interests.

A couple of girls on my floor cooked a traditional cake made for the New Year and gave me some to try. I believe that it was made of turnip, Chinese sausage and various other ingredients. It tasted great although it was not similar to anything that I have ever tasted.

I have a new roommate who is a full time student but is from Shanghai, China. This is a change from my previous roommates who were both European. My new roommate is wonderful and takes a lot of interest in England which is great as I love to talk. She bought me a red box of chocolates for the Chinese New Year which was very thoughtful. Likewise, one of the wonderful girls on my floor endeavoured to bring me tea from China when she was returning for the Chinese New Year and she did! I am now one red box of chinese tea richer. Bear with my attempts at hilarity, the humour is not quite right… 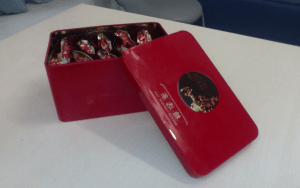 Chinese New year kicked off with everything closing except public transport. This meant that we could explore Hong Kong and so I took off to sight-see alongside some HKU buddies. Our first stop was the very tranquil Nan Lian Garden. Cutting through Diamond Hill’s myriad of high-rise apartments, the scenic garden is a public park built in the style of the Tang dynasty. It is meticulously landscaped with every hill, rock, body of water, plant and timber structure having been placed according to specific rules and methods. A striking gold and red bridge stands idle in the middle. This provided a nice walk for us in the warm sun. 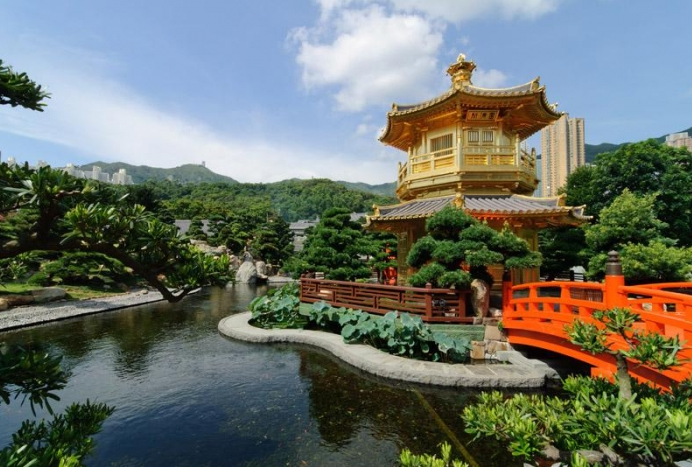 Right next-door was the Chi Lin Nunnery. This is a large temple complex of elegant wooden architecture, treasured Buddhist relics and soul-soothing lotus ponds. The complex also includes a series of temple halls, some of which contain gold, clay and wooden statues representing divinities such as the Sakyamuni Buddha and bodhisattvas. 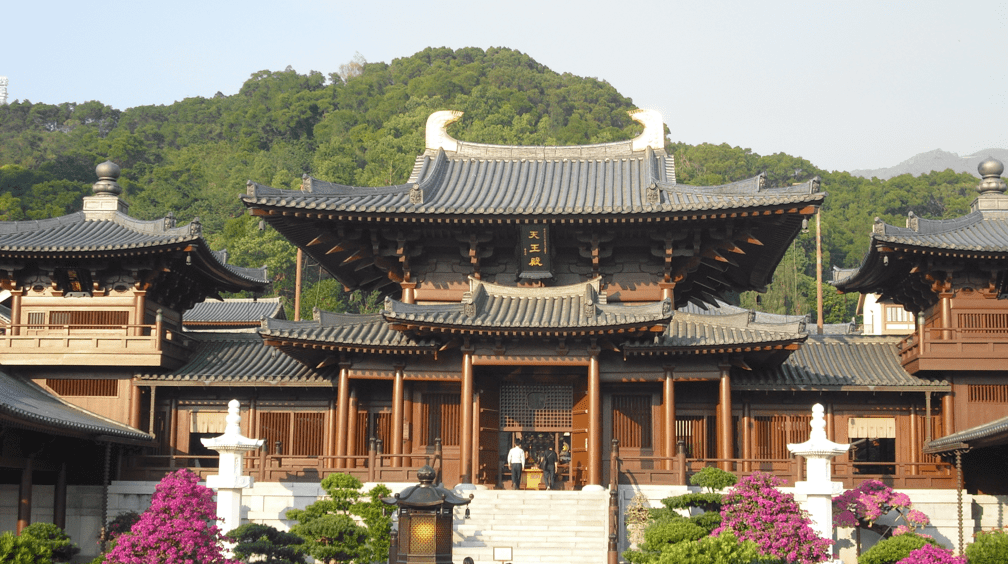 Our next destination was further north of Hong Kong in Sha Tin, where one of my University of Leicester buddies actually lives. Here we visited the 10,000 buddhas monastery. Lined along the steep path to monasteries at the top of a hill were numerous buddhas, 10,000 in fact. Although I suspect there were more… Each buddha pulled a different expression or carried a different ornament or different pose, it was all very exciting as we each selected a buddha to pose in front of and mimic their pose. 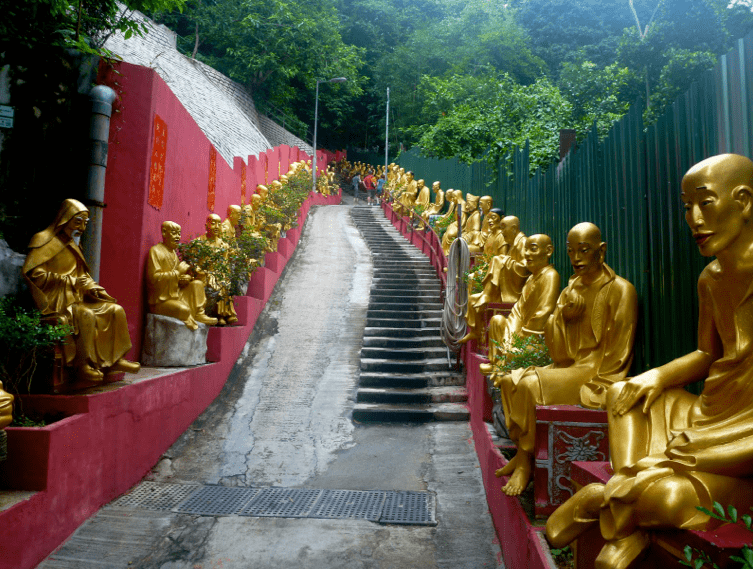 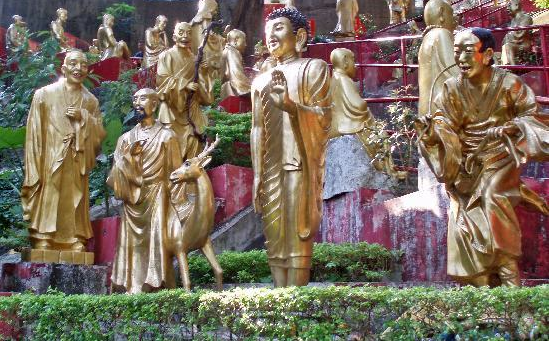 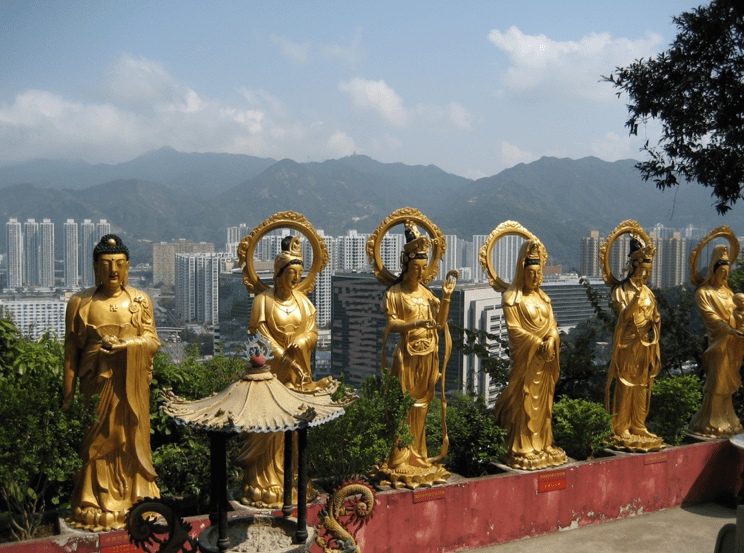 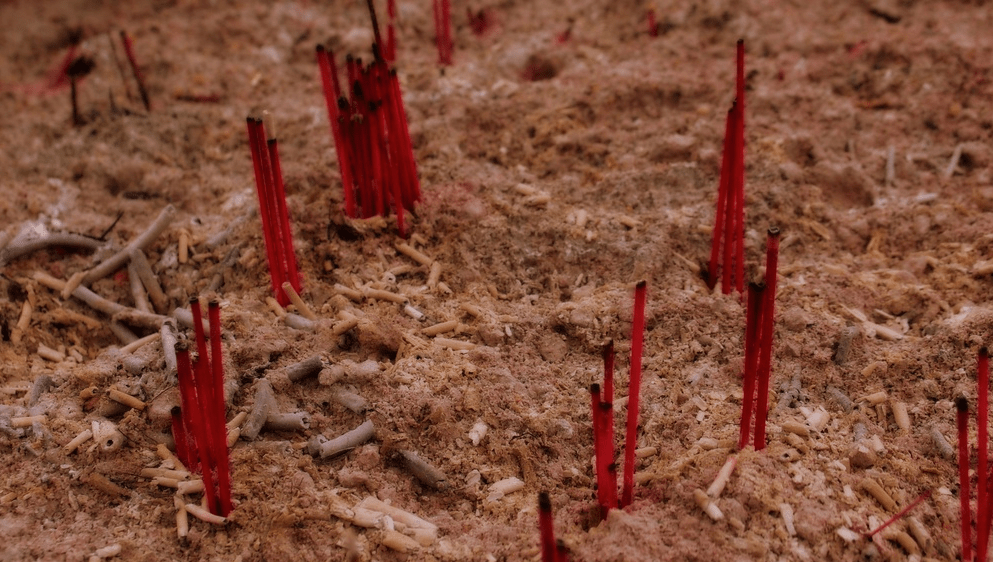 Incense sticks in the sand 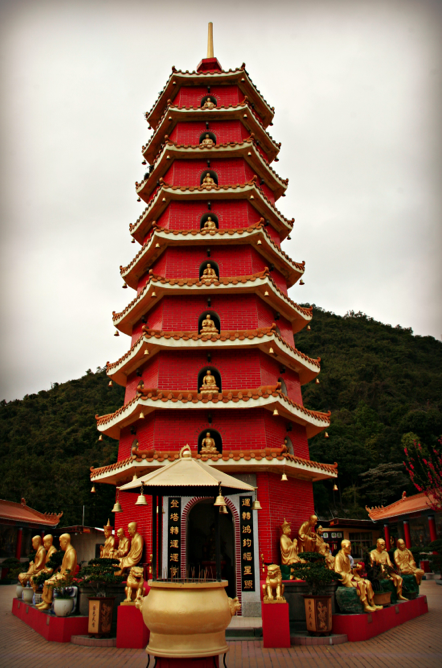 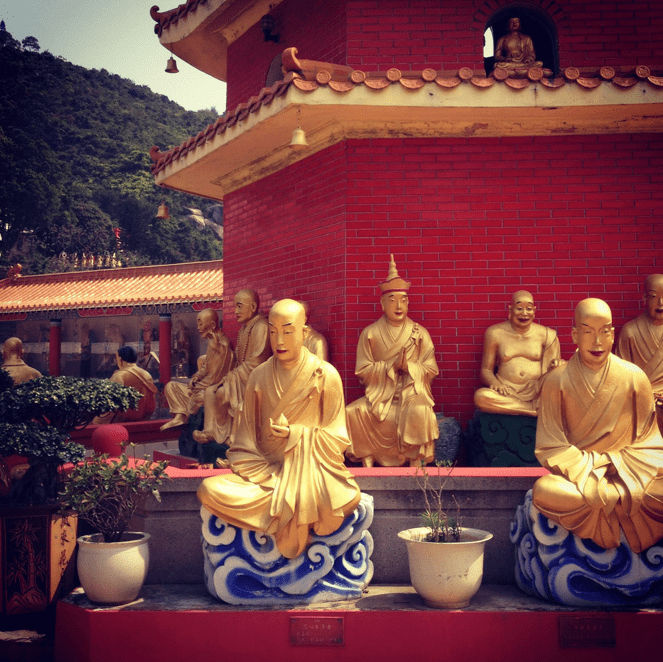 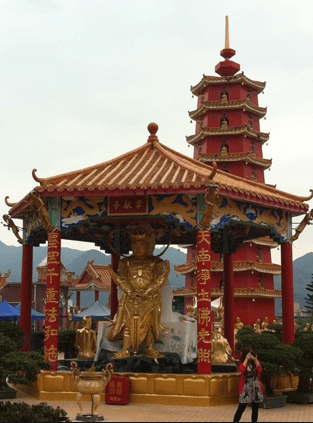 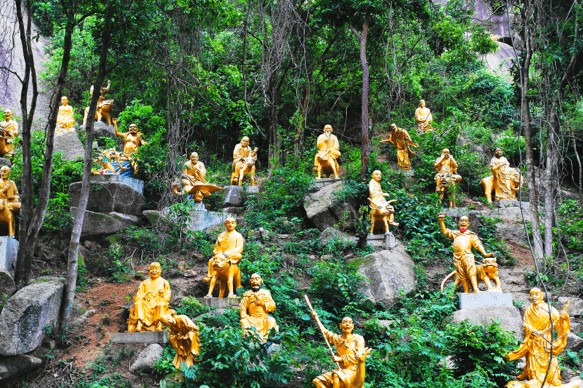 At the bottom of the buddhas monastery, I bought a big red fish decorated with gold gills and colourful sequins that now hangs on my bedroom wall. The season allows for us to buy lots of little Chinese ornaments that are only sold for the New Year. I bought little stringed ornaments with beads and talismans, each slightly different from the other and therefore bearing a different meaning.

A yearly tradition is the setting up of the flower markets in Victoria Park, Causeway Bay. These are usually packed which made the visit a little less pleasant being short and all. There were overcrowded lanes of stalls selling various things from flowers to horse masks to pillows. Luckily, we had our fun and escaped the madness unlike some others that were stuck in a standstill for four whole hours. That’s how packed it was! 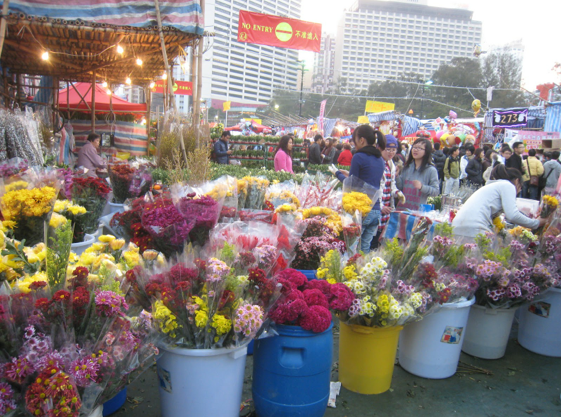 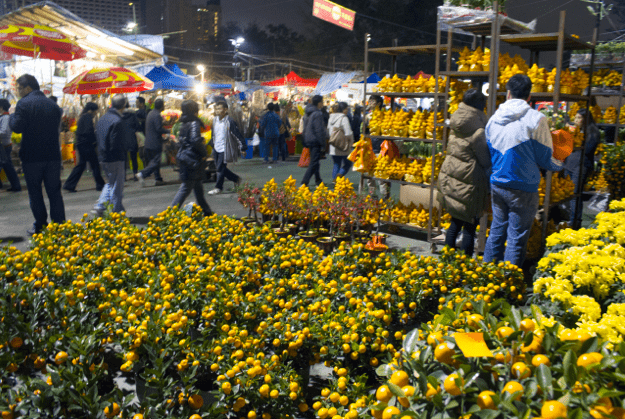 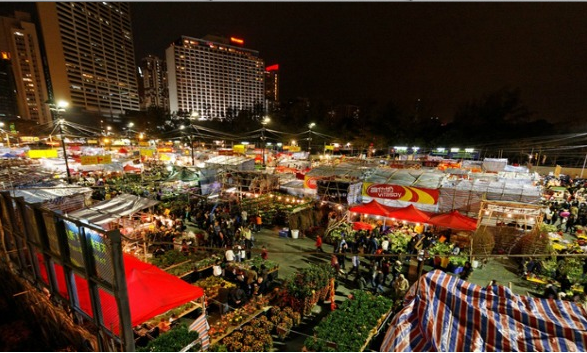 Lanterns are lit all around Hong Kong ahead of the season. Huge lanterns depicting characters and festivities were placed in parks and various other public areas which was lovely to see at night.

The tradition is for families to gather together. This means that dispersed family members will travel down to one location for one massive family gathering. Things tend to centre around eating and unsurprisingly, this festivity demands a huge focus on food! Families will eat until their hearts are content. Eat your heart out.

The children will also dress up and be given money in little red packets. I managed to get 20 cents in mine.

Strangers will hang up or write something called ‘Fai-Chun’. This is a specific message in Chinese writing painted in black on bright red paper. It may something simple like ‘love.’ The contrasting colours and the beautiful calligraphy of Chinese characters make them something worth keeping on your door – they’re stunning.

First held in 1996, the Cathay Pacific International Chinese New Year Night Parade is one of the best-loved events of Hong Kong’s annual celebrations! To mark the beginning of the new Lunar year, a parade is held every year. To mark this date a parade is held every year. As you can imagine, despite there being a long route thousands of families and visitors came out to see the parade so the place was packed. Once again, as a short person, this posed a few problems. However, I could see between people’s heads and there were two fantastic people beside me with high resolution cameras so I could just see things from their cameras. Reviews were mixed but I personally had a great time. Yes, it seemed like an advertisement campaign for a lot of the companies performing but nonetheless they still managed to put on quite the parade. 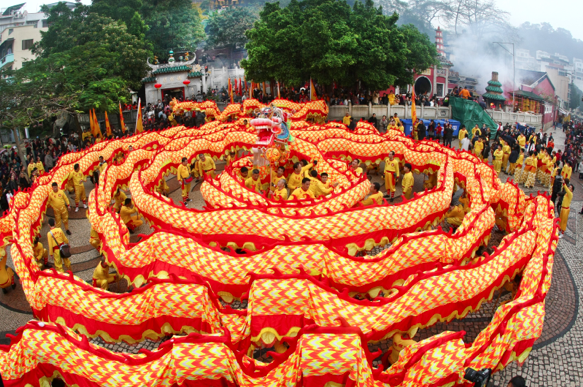 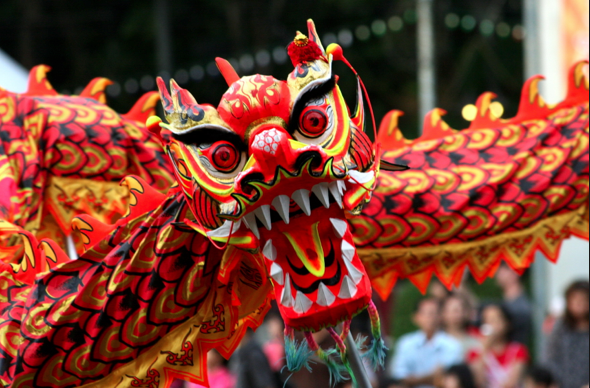 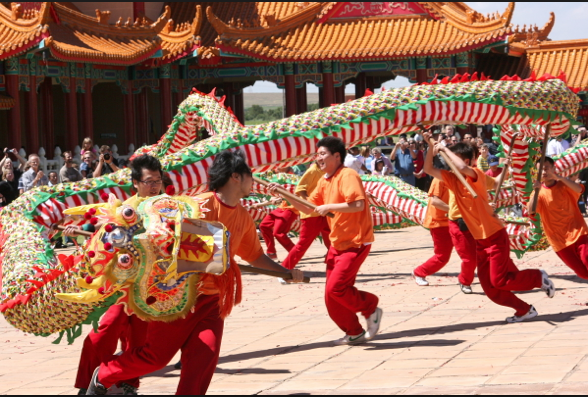 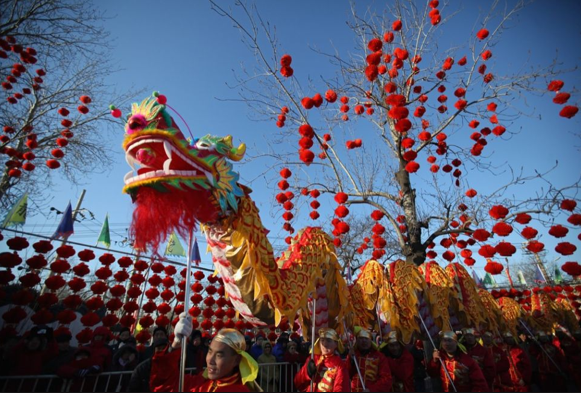 The next evening the fireworks were going to be held. HOW EXCITING? There aren’t very many things that I love more than fireworks so I simply could not wait to see them… We had a couple of visitors visit from Canada, one of which had studied Law at the University of Leicester and had also been the president of the University’s Law Society during my first year. To celebrate, we went for High Tea at The Langham Hotel which is a very common thing to do in Hong Kong. We got all dolled up for the occasion. Here we drank tea from silverware and shared little cakes and appetisers on stacked plates. It was all very formal and pleasant. 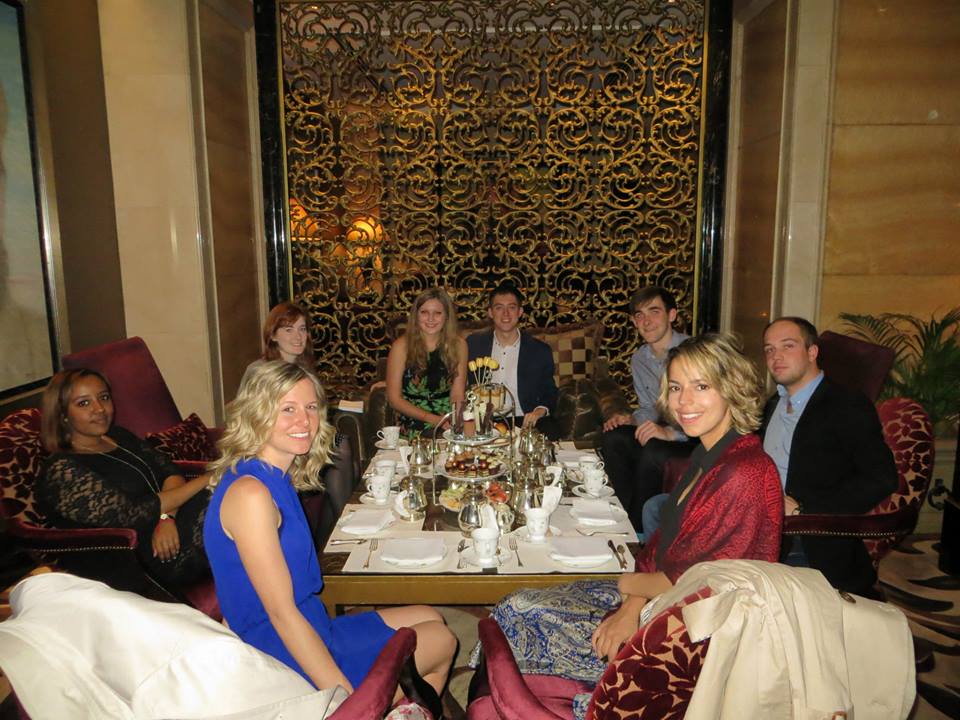 We walked over to Victoria Harbour where the fireworks were being displayed and by golly they were fantastic! Here’s a few snapshots taken by some friends and some I’ve found on the internet (credit to Ali Javaid): 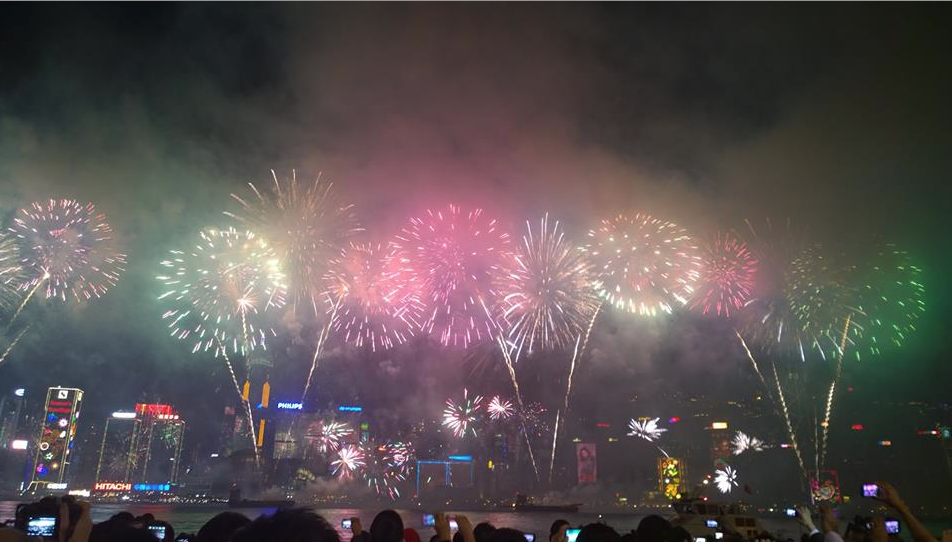 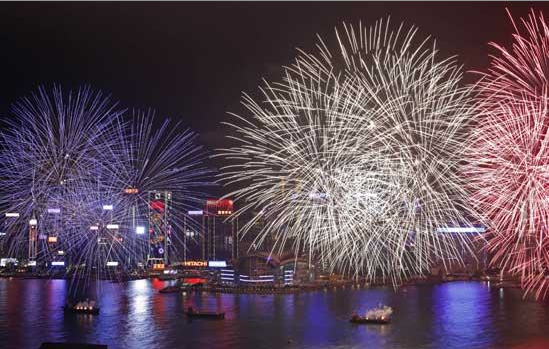 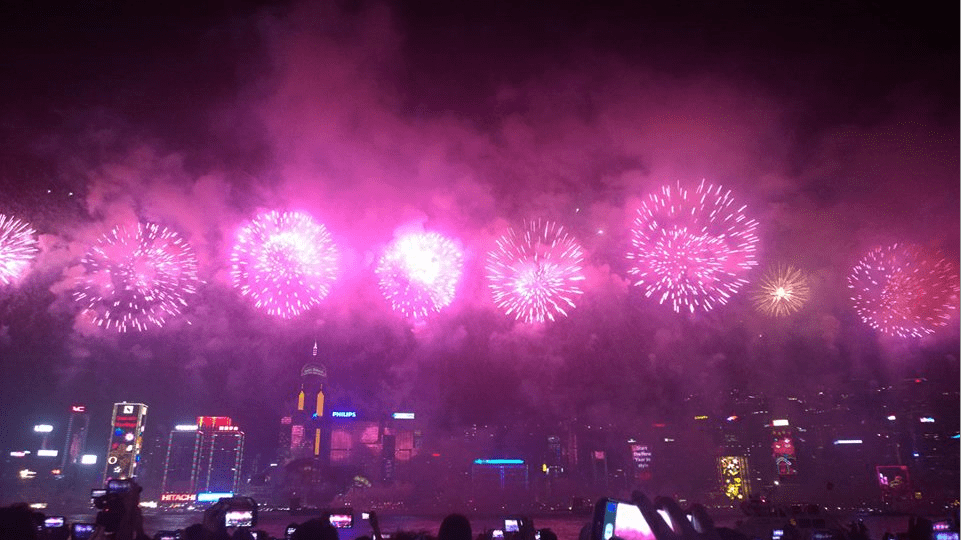 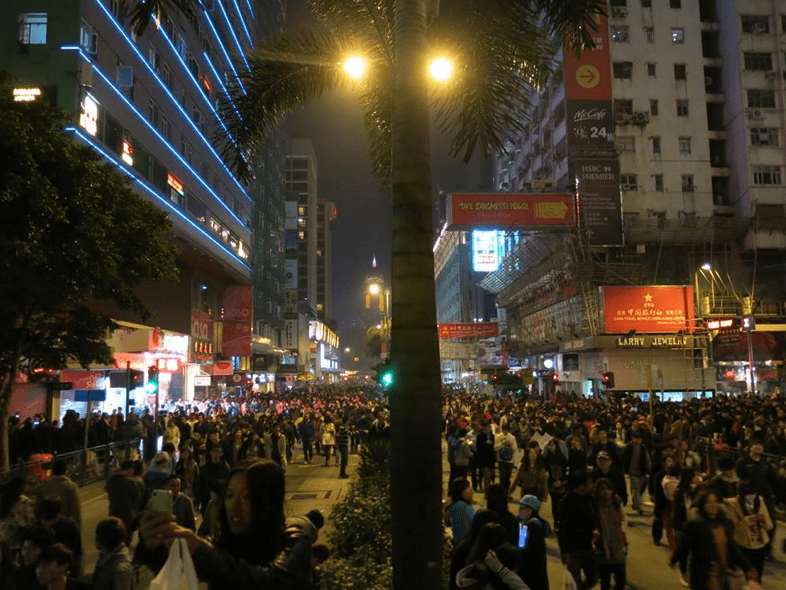 Very crowded streets after the fireworks

Here’s a link to a youtube video of the fireworks:

As for now, it’s back to work I’m afraid.