Exams finished at the end of February and it was a rather bizarre experience. I am used to exam timetables, strict invigilation and 3 hour written papers. In my US Law course the lecturer asked the class what type of questions we would like and decided the composition of the exam in the lesson! For European Insurance Contract Law I had an oral exam: looking bewildered and mumbling something vaguely coherent about warranties was apparently more than enough to pass. If you intend to do a year abroad be aware that universities work very differently to England.

Getting to my International Monetary Law exam was traumatic. As luck would have it, the metro to the University stop was broken down. Swarms of people were waiting for taxis and the replacement bus (which was running late). In a state of panic I posted a status on Facebook explaining my predicament. One friend commented that I should run. A quick look and Google Maps and it said one mile. I decided to do it. It felt like I was in the chase scene of Ferris Bueller’s Day Off. I got there – 20 minutes late and horribly sweaty – but I was allowed to sit the exam.

Ever since that stress my life has been another stream of socialising and partying. It has been an interesting time to be in Germany because of the Carnival season. Lent and Shrove Tuesday don’t really compare to what goes on in many other countries. I went to Cologne (Köln) for the parade on Rose Monday, as it is the place to be. It is almost sacrilegious not to wear a fancy dress costume. I donned a traditional Bavarian dirndl, met some friends and headed out to see the parade. 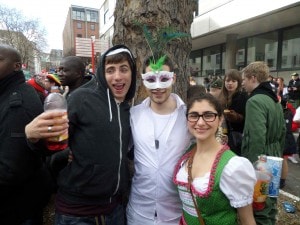 To call the day booze-infused would be an understatement. Everyone is sociable and jolly. The crowd were shouting at the passing floats – asking for the people on the floats to throw them sweets. It can be quite dangerous at times; an innocuous chocolate bar can easily hit you in the face! 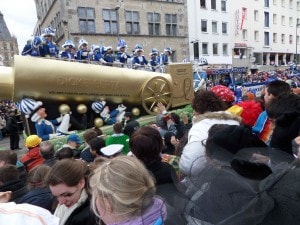 After the parade we went to some bars that were playing some seriously cheesy German songs. We felt a little out place not being able to sing any song other than ‘99 Luftballons’, so we went out in search of another party. We followed the music thinking it was coming from a club. It turned out to be a small kiosk/newsagents. In the spirit of Karneval we started dancing. Slowly people started gathering in the car park of this kiosk and it turned into a full on street party. It was quite a sight dancing between a chicken and a priest to club music in a kiosk-car park.

Definitely go to a continental country for the Carnival season if you can. It’s quite an experience!

One response to “Karneval”