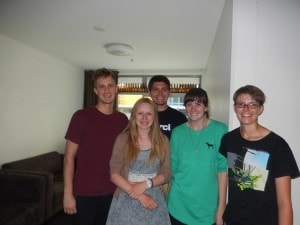 Flat i98 – 3 Americans, 1 Dane, a row of Tui bottles and me… PARTY TIME! Thinking about it, if there’s an earthquake them bottles are going to make a right mess.

Semester 2 is finally well under way, after a much needed summer holiday. Although, I should really say semester 1 is well under way, after all the NZ academic year runs from February to November – I’m just doing everything back to front. Anyhow, I’m all settled into my new flat (in the same accommodation village as last time), with my new and slightly crazy flatmates, who are all 3rd years on exchange too. 3 Americans and 1 Danish guy this time round – literally couldn’t have picked a better bunch of people myself. Its quite literally been a party nearly every night, just like being back in first year – ACE! 🙂 Only downside to the whole thing is having to empty the recycling bin so often…

O-week, or freshers week as we call it back in the UK, has been and gone and the geology work is slowly but surely starting to kick in. Luckily this semester I’ve only got 2 modules during term time (principles of basin analysis and geothermal and ore exploration), so I’ve had plenty time to go to a few of the O-week events and get to know my flatmates. In case you’re wondering, the other 2 modules are field trips. I’ve already had one to Kaikoura, which I’ll blog about next time and the other is during in Easter, to Westport to learn about the break up of Gondwana – exciting stuff. 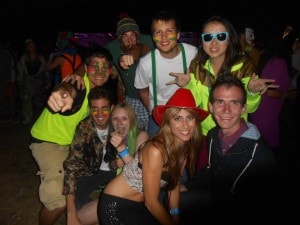 One of the O-week events. Clearly had too much$7 wine that night…

So O-week, orientation week, whatever you want to call it… a week full of 20 odd events from comedy shows to massive, raving parties. I was expecting to be fairly disappointed, after all they don’t have a students union half as good as Leicester’s here but I was pleasantly surprised. In fact, I’d even go as far saying I almost enjoyed it more than Leicester’s freshers week. Instead of being stuck instead the stuffy, sweaty O2 academy, squished up against too many people, with hardly any space to dance; I found myself in a field with plenty of space to wiggle around. It was almost a festival type set up; rows and rows of portaloos, a massive stage with some of NZ’s best DJ’s (admittedly I’d heard of none of them before), drunk people everywhere, all dressed in crazy outfits – I opted for green hair and glitter EVERYWHERE. Kind of looked like something out of a Ke$ha video. Not a great look but at least it made up for missing out on the geology rave bar crawl (You should check out my friend Eleri’s pictures from this year). 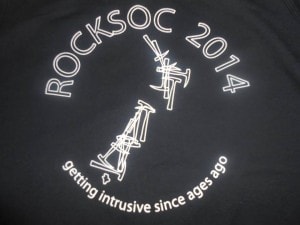 O-week also means clubs day and I made sure I joined up to RockSoc to get a vest top (or singlet as Kiwis call them). Gneiss isn’t it? 😉

To top of all the UCSA events going on, I’ve even been exploring town a little more with my party loving German and Kiwi friends. It turns out that either I’ve been looking in the wrong  places for the last 6 months or all these new places are just starting to pop up now… Either way, I now know that CHRISTCHURCH CAN PARTY! Who knew?! From Mashina under the casino (probably most like Shabang, although still not quite the same) to Revival and Tequila Mockingbird (ye, you guessed it, a bar that specialises in tequila – genius idea or what?). You have no idea how happy I am to finally have somewhere decent to party. In fact, if it wasn’t for my family, friends and needing to finish off in Leicester, I think I’d quite happily live here forever!

On a side note, you should check out all the flooding and landslides that have been happening here in Christchurch this week. We had non stop rain for about 3 days straight. Now that’s a lot of water. Genuinely thought we were going to have to paddle into uni. If only it could have rained vodka instead…

2 responses to “O-week: Pass the vodka”