After my trip to Istanbul, I went to Berlin for a few days.  The recent Lufthansa strike worked in my favour.  It meant that I had to leave Istanbul a day early, but I got to stay in Berlin for an extra two days, which was a fair trade-off.  My rebooked flight’s first changeover was in Berlin, so I seized the opportunity to stay for longer.  Before this convenient disruption occurred, I would’ve had to come back to Copenhagen in the evening, only to get a bus to Berlin the following morning.

Travelling alone for leisure wasn’t something that I would’ve normally considered.  The original plan for me was to go to Berlin as a part of a social package that was prearranged.  However, faced with the circumstances, I found that I enjoyed exploring the city on my own.

Berlin seemed to have a relaxed atmosphere.  I made a good use of my alone time by visiting some of the numerous museums in the city.  Where better to start than on the aptly-named Museum Island?

I got a three-day museum pass for 12 Euros, which is an excellent deal.  It gave me access to fifty museums.  In just two days, I went to the Pergamonmuseum, the Altes Museum, the Neues Museum, and the Alte Nationalgalerie.  The Pergamonmuseum justly earned its high position on TripAdvisor, second only to the Berlin Philharmonic.

I was pretty museumed out after this and after a while it seemed like all of the museums were merging into one in my mind.  However, I was impressed by these museums and they are all worth a visit.

I enjoyed the Berlin Cathedral, which is located on the Museum Island. Completed in 1905, it is Berlin’s largest Protestant church. 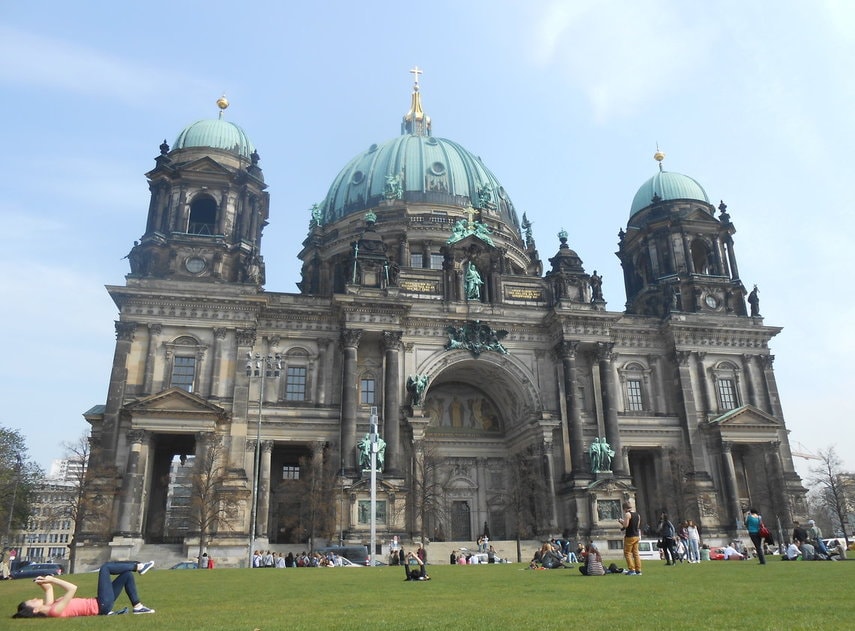 People relaxing in the Lustgarten Park outside the Berlin Cathedral on a sunny day.

Here’s a view from the dome walkway: 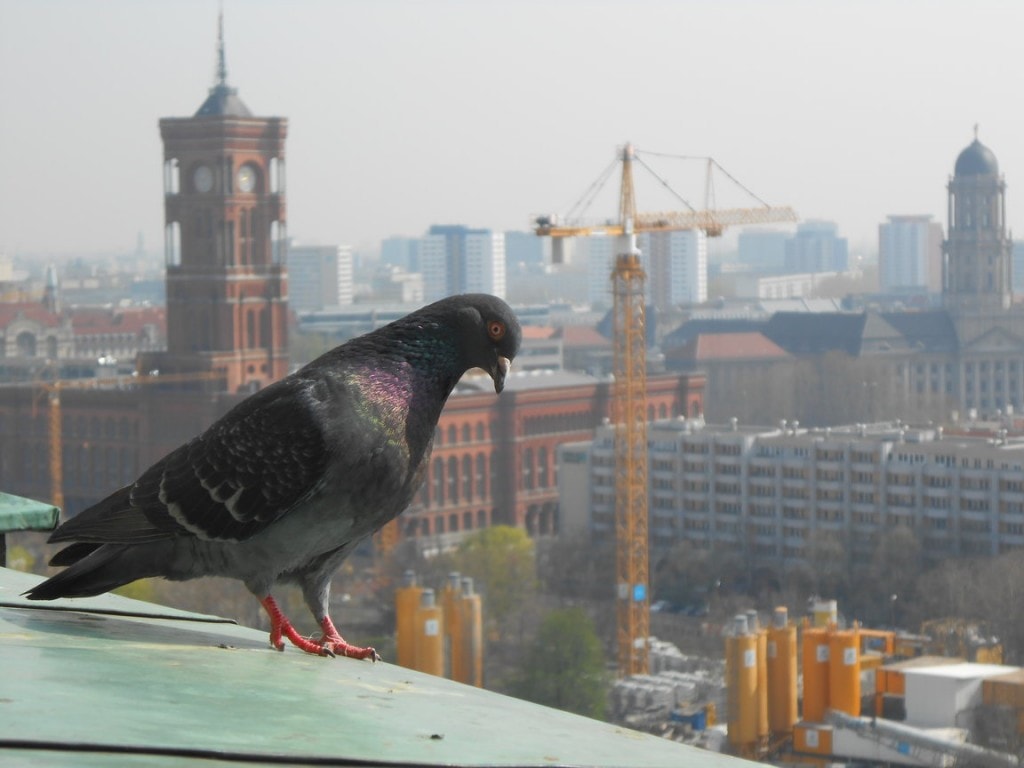 A pigeon contemplates flight.  In the background, the city hall – called Rotes Rathaus – can be seen on the left.  Altes Stadthaus is on the far right.

When I met up with the rest of my group, we explored more of the city together and we sampled the nightlife.  Berlin is a good place to party.

One of the highlights of my trip was the guided walking tour.  Without sounding like an infomercial, if you ever find yourself looking for such a tour in Berlin, I recommend Berlin All-In Private Tours.  My tour guide’s name is Jonny.  He has a wicked sense of humour and a great knowledge of Berlin’s history.  When combined, it makes for an engaging and entertaining experience.

We saw all of the key landmarks and monuments, such as the Brandenburg Gate, the Berlin Wall – at least what remains of it, and Checkpoint Charlie, which now stands in the middle of a busy road next to two McDonald’s Restaurants.  To me, this clearly represents the victory of Capitalism and the West over Communism and the East after the Cold War.

Here I am at the Brandenburg Gate: 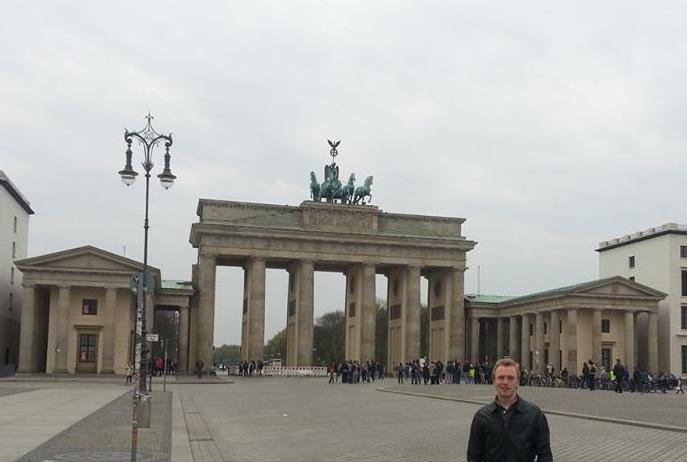 On top of the Brandenburg Gate rests a chariot drawn by four horses, driven by Victoria, the Roman goddess of victory.

In addition, we saw the Führerbunker, which is now a parking lot.  Adjacent to the bunker, there is the Holocaust Memorial.  Designed by Peter Eisenman, this memorial consists of 2,711 concrete slabs that rise and fall in height.  As I walked through the memorial, the slabs gradually began to tower over me as the ground undulated.  It was an eerie experience. 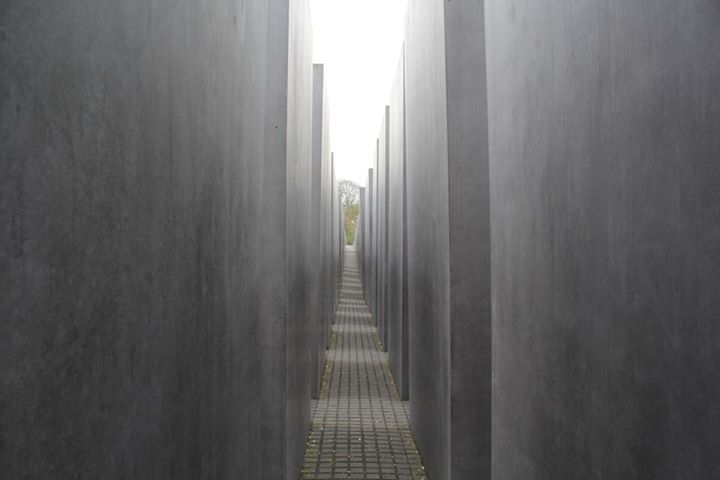 The cold grey slabs of concrete are solid imposing obstructions on the landscape, but they fall at the end.

The juxtaposition of this expansive memorial and Hitler’s bunker – now a mere parking lot that is only identifiable by an unimposing sign – is testament to the fact that the German culture faces their darker history with the gravity that it deserves, by remembering the victims, and not just the perpetrators.

On our journey back to Copenhagen, we visited the Sachsenhausen concentration camp.  This was a sad and sobering experience.  As the birds chirped on this sunny spring day, it was strange to imagine the untold suffering of thousands upon thousands of people.

I have learnt a great deal from my trip to Berlin.  I found it to be a great city that is full of history and culture.  I would love to go back there at some point.