As soon as I found out that I would be spending my year abroad in California, Coachella Festival quickly found its way to the top of my to-do list. A music and arts festival, Coachella has been running since 1999 and has become one of the most earned one of the most famous dates of the global festival calendar, with thousands travelling from across America and the world to sample its annual artistic delights.

This year’s headliners were Outkast (the first leg of their much awaited reunion tour), Muse and Arcade Fire, whilst hundreds of other artists filled up the other slots over the two weekends of the festival. A few of my personal favourites over Weekend 2 (Weekend 1 tickets sold out before I could grab one! Although both dates are identical in terms of the musical line-up) were; Future Islands, Warpaint, Nicolas Jaar, Bicep and Nas, which instantly shows the diversity of the line-up. 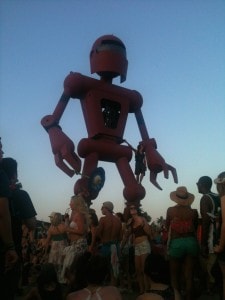 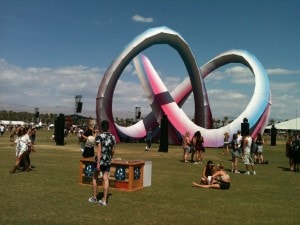 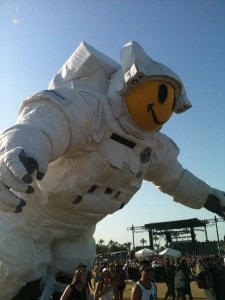 However, Coachella is indeed a music and arts festival and so it would be an insult not to acknowledge the amazing range of installations and art projects that were hosted by the festival. ‘Lightweaver’ by Alexia Rochas, ‘Escape Velocity’ by Poetic Kinetics, and ‘Becoming Human’ by Christian Ristow were three of the most prominent installations that were littered across the Empire Polo Club in Indio, California ensuring that Coachella was both a sonic and visual pleasure.

Ultimately, Coachella was like no other festival I’ve ever experienced. The sheer size of it and the universal desire for uninhibited enjoyment that every wristband-wearer possessed, combined to create an intoxicating atmosphere of jubilance and ecstasy, despite the challenging 30+ temperatures. I only hope to be able to return one day. Thank you, Coachella.