When I left for Heidelberg back in September, my Nan had hinted that she wanted to come and visit. I didn’t think she was particularly serious, but when I went home just before Easter she came round looking very determined, produced her passport and her bank details, and announced that she wanted me to book the flights and hotel for her. I have to admit I felt a bit apprehensive about her visiting, I’d genuinely never spent time with just my Nan before, and also Heidelberg is very pedestrianized and requires a lot of walking, and at 82 that isn’t my Nan’s strong point.

Nevertheless, we actually had a lovely time! I couldn’t meet her when she arrived in Heidelberg as I had a class, so I made her a detailed map where I had walked her exact route and taken photos from every angle so she wouldn’t get lost. She still managed to take the bus in the wrong direction and had to go round in a big loop, but apart from that she made it by herself all in one piece. The weather hadn’t been too good the week before, so I was worried because I wanted my Nan to love Heidelberg as much as I do.

Heidelberg has an abundance of churches, and my Nan loves to look at churches, so that went well and we spent a whole morning just ambling around and looking in the guide book I had bought in preparation to find out the local history. My Nan had also told me she wanted to look at “all the museums and art galleries” in Heidelberg, which I was initially sceptical about because the only ‘museum’ I’ve come across so far has been the packaging museum… But we also decided to check out the ‘Kurpfalisches’ museum, which was meant to document Heidelberg’s history. I’d never bothered to go in before, but it was actually really interesting! It was filled with old ornaments and old clothes and lots of paintings and rooms decorated in styles from different eras, so my Nan loved it, but I was pleasantly surprised too!

On the last day we went up to the castle and my Nan announced that she wanted to go on a tour inside the castle, which despite having lived here for 8 months now I had never looked into. So off we went to get tickets for that, and again I was surprisingly glad we had done it. After that we went up to ‘konigstuhl’, which is a high point in Heidelberg and which offers a great view of the city. To get up you go in this sort of carriage on a pulley and my Nan was fascinated, so that was another hit. All in all I had a lot of fun, despite being initially very nervous, and my Nan told my Mum on her return to Blighty that she’d really enjoyed herself too, which was the main thing!

I’ve been spending a lot of my spare time doing work so far this semester, as the work load seems a bit more intense this time around. I’m getting itchy feet wanting to go and see somewhere new, but I really need to prioritise my work because I have presentations coming up. I’ve had to reassure myself by looking through old photos and remembering how many places I’ve already had the chance to see, and how lucky I am to be here.

I’ll end this post with a picture of the view from the top of konigstuhl: 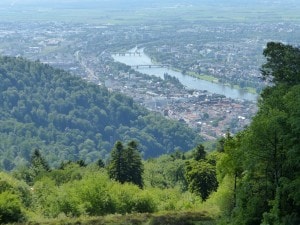