I spent the first week of June trying to get two presentations together, so that I’d be free to go to visit my friend the 6th-8th June. She’s studying in Utrecht and I was so excited to go and visit. I managed to get my work done, so off I went on my merry way. Aside from a few train issues because my seat reservations turned out to have been double booked, the journey was easy and it always amazes me how you can get on a train in one country and get off in another.

It turns out that Utrecht is beautiful and I’d really recommend it if you find yourself in that part of the world. It’s only half an hour away from Amsterdam as well, but it’s a bit smaller and easier to manage I’d guess. (I’ll be able to tell you soon because I’m going to Amsterdam next week!) Apparently the Dutch are known as the most innovative and productive people in Europe, and Utrecht is the most productive of all the Netherlands, so when I went to visit the uni I could really say that I was in the most productive place in Europe! Geographically Utrecht is also in the centre of the Netherlands as well, so that’s pretty cool. I spent the weekend being shown round by my friend and being introduced to several Dutch pancakes- a very positive verdict from me. It was great to be able to see where she’s been living her year abroad; we spent a lot of time comparing the similarities and differences of the two places we were studying. Of course I love Heidelberg, but I can imagine I’d have been equally happy in Utrecht.

This brings me on to my next travel plans. My university has a ‘project week’ next week and my teachers have chosen not to put anything on, so I essentially have a week off. I want to spend the last half of the week gloomily contemplating my term papers, but starting tomorrow evening I will first be stopping off at Budapest and Amsterdam. For those of you who know your way around a map of Europe this may seem counter-productive, as these two cities are in basically opposite directions! My original plan was to just go to Amsterdam, but then my friend from last semester who lives in Israel told me she was going to Budapest to give a conference and could I come and say hi, and I couldn’t say no! So that’s what I’ve been up to and will be up to these next few days.

P.S the weather is SO hot in Heidelberg right now, on Monday it got up to 36 degrees, I’m not quite sure how to cope with this turn of events! 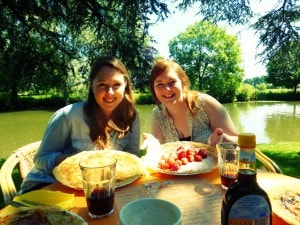 Me, my friend, and our pancakes!