A tale of two cities: Budapest and Amsterdam

Last week the English department at Heidelberg had “project week”, which as far as I know means you can attend any classes you want and none of them are compulsory. My teachers seemed to take a very laid back approach to this week and just said- we aren’t putting on classes, you do what you want. So I followed their spirit and chose to go to Amsterdam with my housemate! And then about 2 weeks before I left, my friend from last semester who lives in Israel told me she was coming to give a conference in Budapest, and was there any way I could come and visit? And could I?! I love my friend and I love Budapest, so there was really only one answer to that question. Never mind that Budapest and Amsterdam are in almost completely opposite directions so the travelling wasn’t the greatest (night trains are just so bad!), because the trip was.

I got to spend some time by myself in Budapest whilst my friend was in the conference, which initially I was a bit worried about because I never really go to places on my own, but in the end I’m so glad it happened. I strolled around to get my bearings, and then I actually consulted a map to find some of the places I wanted to go! Even more unbelievably, I then found the places I wanted to see using the map, all by myself! I felt very strong and independent etc. But of course the reason I’d gone was to see my friend, and I had so much fun spending time with her. Nothing had changed and we got on just like always, and really Budapest is just beautiful, so we had a lot of fun exploring. I was only there for a brief visit before it was time to go and meet my friend in Amsterdam… 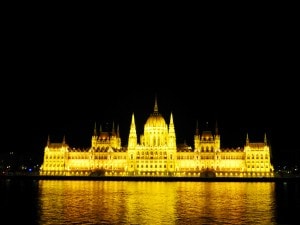 One more night train behind me, I arrived in Amsterdam very bleary eyed and not feeling my finest. Luckily my friend was waiting for me at the hostel because my phones weren’t co-operating and I was out of communication. I’d also acquired some very impressive blisters from my time in Budapest, actually my feet resembled bubble wrap, so I was on the verge of meltdown. My friend coaxed me out to get food and then we went for a wander around to get our bearings. Of course we had to pay a trip to the Red Light District, which I’m glad I saw but still have ambivalent feelings about, and we figured out where the Anne Frank House was for the next day.

The next day we got up at what we thought was early o’ clock in order to beat the queue for the Anne Frank House, but it turned out the queue was out in full force by the time we got there, so we decided to try again later and instead went in the Cheese Museum- don’t knock it until you’ve tried it! Free cheese and the chance to dress up in “traditional” (i.e. windmill patterned) clothing- you can’t say no! After that we went on a boat tour, got off at the Van Gogh museum (which was SO good!) and then hopped back on to try again at the Anne Frank House. 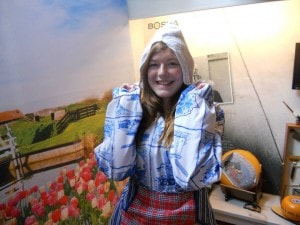 It turned out the queue was even more impressive this time, but I’d had my heart set on seeing it, so I convinced my friend to wait with me. I read the diary when I was about the same age as Anne was, and I’d always wanted to go to her house. And I wasn’t disappointed- it was so well done and so powerful to see the place where they actually hid. Anne’s father wanted the actual rooms they stayed in to remain empty (most things were taken once the family were discovered) to represent the void left behind, which is just overwhelming. Sometimes the Holocaust is such a big idea that it’s just impossible to comprehend, and then you see the story of one girl and you realise that there were 6 million Anne Franks, and suddenly something that big is not only a lot more comprehendible but freshly heart-breaking too.

Anyway, so that’s what I did. I got back on Tuesday and spent the rest of project week trying to prepare for my first term paper- it’s officially 6 weeks and 6 days until I come home now, so I need to get cracking on! My next post will be my last one as a study abroad blogger, so I’ll tell you what my plans are for the rest of my time here then. Until then, Tschuss!