Well that’s it, my time as a study abroad blogger is over! My contract ends today, although my time abroad doesn’t. The German terms are different, so my semester doesn’t officially end until the end of September, and I will be in Heidelberg until August 10th. This means I’m not quite ready to do reflections on my year away yet, because I’m still trying to hide from myself the fact that I’m going to be leaving, so instead here is the plan for the rest of my time here:

This weekend my sister is coming to visit me. She’s 16 and had big ideas about spending this summer travelling with her friends, which my Mum put a stop to because she thought my sister was too young. As a compromise, my sister is travelling to visit me by herself, and judging by how nervous she is to fly alone, I feel like my Mum made the right choice! I’m really excited to show her where I’ve been living for the last 9 months, but I’m a bit nervous too- my younger sister is definitely cooler than me and I’m scared she won’t like my adopted home as much as I do.

The weekend after that I want to go on an excursion run by the university to go to Lake Constance, which I’ve had my eye on for a while now. The weather has been glorious recently so I’m really hoping it’ll be sunny and we’ll get to see the lake at its best. Then in the evening Heidelberg’s firework display is scheduled- they do 3 in the summer: one in June, one in July, and one in September. I arrived in time to see the September one last year, and I missed the June one this year because I was in Utrecht, so it’d be satisfying in an ending-where-I-started way to see the July display.

And the weekend after that I will hopefully be heading to Munich to see my friend who came to visit me a few weeks ago. I’ve been to Munich once before but I only spent a day there so I by no means saw everything, and I’m hoping I get to see this fake wave that people apparently surf on in the park there that I’ve been told so much about!

This all sounds like fun and games, but on the Tuesday after my weekend in Munich I will have my final week of classes, and my 5th and final presentation of the term. After that week I will have 2 weeks left in Heidelberg. I had hoped to go to Paris in that time, but then reality set in as I realised that a) I have 5 term papers to write that I need to be cracking on with, and b) I had to pay my first instalment of rent for Leicester housing, which came to a painful £870, so I think I’ll be staying in the country for the rest of my time here now! Depending on how I get on I’m hoping to go on a couple of day trips, but realistically I need to be getting as many of my term papers done as possible whilst I can still make use of the library facilities here. It’s not going to be the most exciting end to my year abroad, but necessary. I also feel like un-entangling myself from the bureaucratic nightmare I’m currently tied up in might take up a bit of time as well, so I need time for that too! My Mum is coming out to see Heidelberg for one last time before flying back with me, which is very kind of her.

So that is hopefully how I’ll be ending my year abroad 🙂 It might not quite be the last you hear from me though, as fingers crossed I have been told I will be blogging as an English student next year so hopefully that will come into fruition, in which case, I’ll speak to you soon!

Should you have any questions about studying abroad, please don’t hesitate to contact: studyabroad@le.ac.uk, where I’m sure any of your questions can be answered. Well, bye 🙂 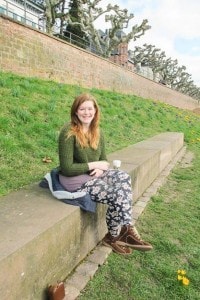