Last weekend I visited Strasbourg in France with a friend, and the day trip was a welcome break after completing all of my required presentations this term. Now only the term papers remain, of which I will aim to finish before leaving Germany next month.

Strasbourg is located in the Alsace, on the border between France and Germany, and has a unique atmosphere. Having switched hands between the countries numerous times, Strasbourg is a city of two cultures. While the culture is undoubtedly French, hallmarks of its German past can be seen in the medieval architecture of the city, as quaint timber-framed buildings line the inner-island of Petit-France. 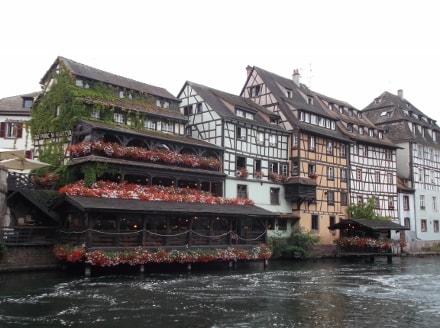 The picturesque Petit-France was my first stop, and entering the district was like being transported back several centuries to the medieval era, as the chaos of the city centre was replaced with quiet canals, winding lanes and old timber-framed buildings adorned with fancy flower arrangements.

The city’s monumental Strasbourg Cathedral, which dates back to the medieval era is also a cultural highlight. The impressive Gothic monument stands tall in the midst of the city, and is surrounded by numerous coffee shops and restaurants serving the city’s signature dish, Flammkuchen.

The highlight of the trip was visiting the botanical gardens, which are situated opposite Strasbourg University. The park displays numerous tropical plants, and while I was there I was lucky enough to catch an exhibition showcasing numerous vibrant flowers from Japan. The park, which is situated off the main island, is a haven of quiet away from the hustle and bustle for the city’s wildlife consisting of small turtles, catfish and frogs to name a few.

But alas! This week I’m back to student life in Heidelberg. July marks the start of assessments, and once again the library is a hub for students eager to get in their final revision before exams strike at the end of the month.

Until next time! Ciao!