It really is utterly bizarre, as an English person, to hear German football fans singing the quintessentially English song, ‘Football’s coming home’. I don’t whether it’s because of naivety, or that they don’t know what the lyrics mean, or from a sense of irony – but I think most people can categorically agree, Germany is not the ‘home’ of football.

That being said, after crushing Brazil into stupefied submission one could forgive them for thinking football is really ‘their’ game rather than ours. What a feeling it must be to be a German right now? Hopefully I can be forgiven for my allegiance with Germany. I just want to share in the elation: to celebrate with a nation that can share a collective dream of raising that ubiquitous trophy at the end of the World Cup. And I swear I was a die-hard, tribalistic England and Iran fan during the group stages. Nevertheless, it’s hard not to get swept up in the Fußballfieber (football fever). It truly is a magnificent time to be an Erasmus student in Germany.

I had the privilege of seeing the quarter-final at the Frankfurt stadium. It was packed full of enthusiastic young Germans, waving their flags and singing at the top of their lungs. I tried to share in the spirit of the occasion by donning my dirndl once more and shouting ‘Super Deutschland’ with the rest of the crowd. Unfortunately, I was also with a large group of French friends and so had to tone down my celebrations a little. I know how it feels to have your dreams shattered … as does every England fan. 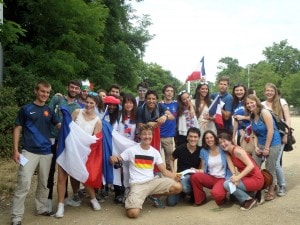 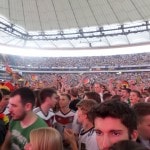 Crowds at the Commerzbank arena 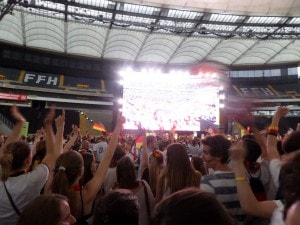 Germany played sublime football in the semi-final. Brazil were punished for abysmally sloppy defending and outclassed in every single way. Unsurprisingly, the streets were alive with the noise of car horns, flag-waving and chanting. The euphoria of the crowds on the streets after the game was completely deserved. Maybe 2014 will be Deutschland’s year?