Review: My Fair Lady, The Musical

Hi guys, it’s not quite time for my last post yet so I’ll share my experience of seeing My Fair Lady, The Musical this week, which was performed in the beautiful inner-courtyard of Heidelberg Castle.

The musical is based on George Bernard Shaw’s popular stage play Pygmalion. Professor Henry Higgins, an antisocial phonetician, has a chance encounter with Eliza Doolittle, a rough-talking Cockney flower girl. The pair make an alliance when, for a bet, the Professor attempts to transform Eliza into a well-spoken lady and fool the English aristocracy.

My Fair Lady is a cult classic, and is most often recognised for Audrey Hepburn’s starring role as Eliza in the 1964 film version. Having studied the play last term, I was especially excited to see how it would be adapted this time around. 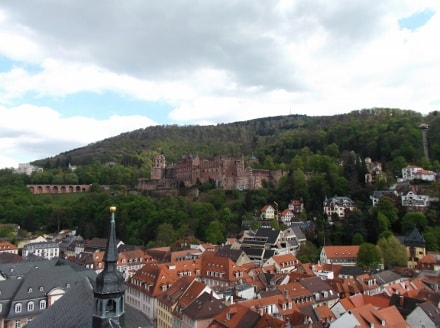 Heidelberg Castle in the distance.

The play was given a modern twist, as Eliza was styled as a boisterous young woman, with hippies, builders and street preachers amongst her crew of friends. Even a John Lennon look-a-like made an appearance! There was also a lot of audience interaction, as the actors and actresses mingled amongst the audience before the start of the play. It was great to see a comic interpretation of My Fair Lady, as Eliza’s defiance and the Professor’s exasperation often made the audience break into collective laughter.

The outdoor setting was striking: as the summer evening shifted from evening to night, the illuminated castle walls loomed over the stage. In this version, the live orchestra played on stage beside the actors, instead of being hidden in a pit. It was also amusing to hear popular melodies from the musical sung in German! Overall it was a thoroughly enjoyable evening.

It’s now the last week of classes, and soon students will be preparing to travel back home, whether that be Germany or further afield. Heidelberg will succumb to the wave of tourists, eager to see its many sights. But before then, I’ll be continuing with my papers, and beginning the arduous task of preparing to go home.
Bis bald!