It’s always the same with trains. Never quite on time. I spend a lot of my time on trains. Birmingham New Street is pretty much a third home with all the time I spend waiting there for connections. And I don’t know how I’d survive without my 16-25 railcard. As a student living away from home, I’d highly recommend getting one, if you haven’t already. After my ID, student card and bank card, my railcard is the most prized possession in my purse!

There are a lot of people waiting for this train, and every one of us is getting closer and closer to the edge of the platform, in a ‘polite’ way of making sure we get to the train doors first! While I’m waiting on platform 3a at Leicester Station I look around at the billboards and adverts. We’re pretty much a captive audience so it’s hard not to notice this sign… 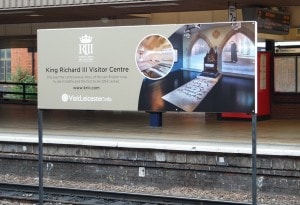 I mean, it’s a great accomplishment for the university, yes, but we’re gonna have to lay this Richard thing to rest at some point… (I’d be lying if I said ‘no pun intended’).

One of the things I love about Leicester is how central it is. University is where you meet friends from all over the country, and being in the middle of the country makes it easy enough to hop on the train to travel to see them. Whether you’re going for a friend’s birthday up in Manchester, staying with a friend in Northampton, or just taking a day trip with your squad to Nottingham. Why not! It’s all part of the university experience, and with a railcard it’s affordable. As you all know, before embarking on any train journey make sure you have your headphones – for adding a dramatic soundtrack to your journey, but also as an effective way to avoid having to make small talk with anyone. Works like a charm! Unless you’re actually a really friendly person who enjoys small talk. I, like many people, do not!

Train travel isn’t always as fun as I’m making it out to be though. Many a time I’ve had to lug big suitcases, holdalls and backpacks around, and if you’ve been to Birmingham New Street recently, you’ll know that it’s an absolute nightmare to navigate with all the construction work going on. Likewise if you’ve ever been on an Arriva Trains Wales train, you’ll know it’s a nightmare to get a seat.

Most of the time, trains aren’t that bad, and sitting on a train with nothing to do is always the perfect place to get some last minute work or revision done!