Well, it’s come to that time in my life once again. My phone contract has run out and I need to choose a new phone. Phone shopping is one of my least favourite activities, there are just too many to choose from. This one has a bigger screen, this one has a better camera, but this one claims to have longer battery life…. All I know is that there’s one thing that I’m certain of; I won’t be upgrading my iPhone. I’ve had enough of seeing this message everytime I try to download essential app updates: 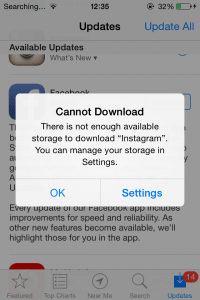 …and buying an iPhone with bigger memory is not financially practical!

I got my iPhone 4 (that’s right, not even a 4s) 2 years ago, as I needed a new and reliable phone to move to Leicester. 2 years later and the Apple novelty has worn off! I just find it a little bit disheartning that as soon as you get an iPhone, they release a newer, better version within the year. So you upgrade, and then there’s an even better one available. So I’ve decided to branch out, and try something else.

As I’m moving to France at the end of August, my situation is slightly different, and choosing a phone becomes just a little bit more confusing. I’ll need a phone that will work abroad, so after much deliberation at Carphone Warehouse, picking up phones to see if they’ll fit in my small hands, I’ve decided to go for an unlocked Sony Experia M4. With an unlocked phone, I can buy a sim card while I’m in France so that I can have a local number. I know that other people are planning on taking their current phone with them and using their holiday rates until they get a cheap pay as you go phone while they’re away, which is another viable option. Alternatively, dual sim phones are available, which means you can have a UK sim as well as your foreign sim card. There are lots of options, lots of phones to choose from, and it can be very complicated! It just takes a little patience, but mine’s starting to run out.

As soon as it dawned on me that I’d be living in another country, I immediately wondered ‘How will my phone work? How will I contact people at home?!’. But with internet access at my accommodation (which is yet to be arranged, but that’s a story for a later post!) and on campus, paired with Facebook, Skype and all those other social media apps, I don’t have to worry too much about getting in touch with everyone back home. I’m really going to need some comforting words from family and friends while I’m settling in!