Before I talk to you about the University and life here as a whole, I should introduce you to the place where I’ll be staying during my year abroad- St. George’s College. The University of Western Australia varies from British Universities in so far as halls of residence are organised into five colleges which are more independent than in Britain. Whereas in Leicester JoFo, GMS, Beaumont, Digby and even Mary Gee are all run by the same people and participate in the same events, the colleges here have very little to do with each other apart from inter-college competitions. It’s based on the Oxford/Cambridge system of colleges, and it creates a fantastic community (even if that sounds like its straight out of a prospectus, it really is true). St. George’s is by far the smallest college, with only about 240 students and is apparently the hardest to get in to, however its small size means that within a few weeks you will have spoken to most people and got to know them. The meal times are quite short, and you have to fill up a table before you can start a new one, so you are able to talk to everyone quickly. St. George’s is also the friendliest atmosphere I’ve ever encountered at University (no disrespect to Leicester) and both the Australians and the international students are extremely open and friendly. However, disregarding the friendliness of everyone and the community feel of it all, the biggest positive of St. George’s is how the place looks. 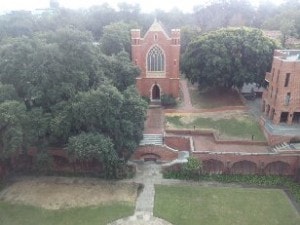 View from the top of the flag tower

As you can see, the place is properly gorgeous, and is known as the Hogwarts of UWA. The dining hall honestly looks like it’s been taken out of the movies (unfortunately phones aren’t allowed at dinner time so I haven’t take a photo of it yet). The college also puts on some pretty amazing events, including formal dinners and fireside chats, where speakers are bought in to talk about their fields of expertise, and all the students dress up in academic gowns and are given a fancy meal for dinner. There are also lots of excursions organised by St. George’s, such as cocktail nights and museum visits, as well as parties (open bar after $20 entry) and various events organised by individual residential advisors. 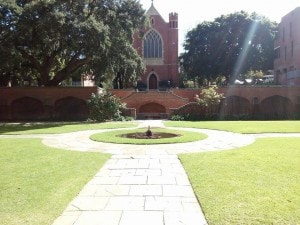 As well as the social side of things, the colleges all provide tuition programmes for free where students can learn more about their subject or seek help from alumni, external tutors or current students. There are also opportunities to participate in musical groups (from acapella to battle of the bands) as well as learning to read music or play an instrument, and groups where you can learn a language or improve your CV.

Colleges are not compulsory and there are many international students I’ve met who are flat sharing or living outside of the colleges in other ways. However, college living adds so much to the University experience, even more so than living in halls does in Leicester. There are different colleges for your needs as well, whereas St. George’s is very friendly, looks like a castle, and is small (there are only 2 other Brits on their year abroad here), Trinity has around 50 exchange students just from the US and the UK, UniHall is huge and modern, St. Catherine’s is also quite close-knit and are big on sports, and St. Thomas More is currently undergoing a massive upgrade. If you’re thinking of studying at the University of Western Australia, definitely consider living at a college (especially St. George’s) because it’s enhanced my experience here so much already, and leave a comment if you want to ask me anything about it! 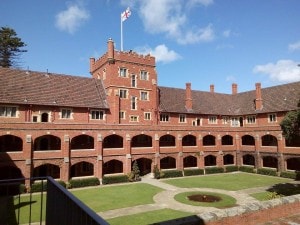