What to do when you arrive

So, you’ve arrived at your destination and uni/work placement doesn’t start for another few days. What are you supposed to do? You’re in limbo. Or as I have pessimistically named it, purgatory. You’re just waiting for something to happen, and there’s not much you can do in the mean time. Especially if you’re in France and it’s a Sunday. France just doesn’t function on Sundays. Shops don’t close at 4pm, they just don’t bother opening in the first place. There have been discussions galore in France in recent years as the Macron law aims to change this tradition, but for now in most places you have to remember to do your food shopping on a Saturday.

Well, there’s one thing you can do – food shopping! It’s always a good idea to go for a little wander, scope out the surrounding area and familiarise yourself with the environment. While you’re at it, go to your local supermarket where you can begin to get an idea of the prices of things (as there may be changes to what you’re used to in the UK), and get used to using a different currency. I’ve been to Europe many times in the past, and I’m still really slow at counting coins.

Another thing to do which may seem daunting, especially in another language, is open a bank account. I was stressing about doing this for weeks before I arrived but as it turned out I had nothing to worry about. The first step is finding a bank. Fortunately, there was a bank right next to the hotel I was staying in for the first two nights, so I didn’t have to look very hard to find one. The next step was to find the courage to actually walk into said bank, and ask to open and account. All I needed with me to open an account was proof of identity (I opted for passport) and proof of address. I didn’t actually have the latter. All I had was a blank version of the contract I had signed and sent to my landlady… but to my surprise the lovely lady behind the desk accepted it! Voila, French bank account sorted! There’s really no need to stress, as long as you have the required documents you’ll be fine, and you’ll feel a great sense of achievement after doing it.

By now you have food and money, that means you’re surviving so far. Well done! But if you’re struggling with the thought of being miles away from everything and everyone you know and love, here’s what you can do: 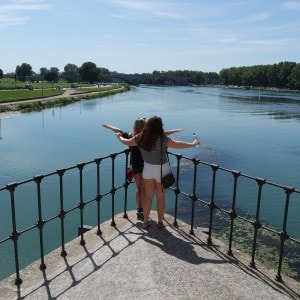 It would’ve been rude to NOT recreate Titanic here