Posted by Courtney in Study Abroad on September 4, 2015

It’s just over a week since I’ve moved to Texas, and it feels like I’ve been here for so much longer. It’s been very hectic and I’ve had to move in, complete registration and orientation, purchase books, and find my way around the very large (by UK standards) campus. Thrown in at the deep end over three thousand miles from home and without any friends it has been a very steep learning curve. It’s strange being in a place when not a day can go by without someone commenting on your accent or asking you to repeat a word but that’s really the only difference between being a fresher at the University of Texas and the University of Leicester. It really does feel like I’m a first year again, and I don’t know how to feel about that. 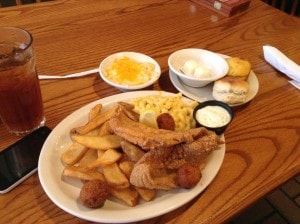 Everything is bigger in Texas!

I won’t sugar coat it, this week has been hard. I’m missing home more than I ever thought I would and struggling to really settle in here – I’ve made some great friends in my accommodation who are kind and that’s helped the transition along but it’s still very difficult. There are times when I want to lock myself in my room and cry – but apart from that being very inconsiderate to my roommate it’s very counterproductive. If I don’t try to get involved on campus and meet people I’ll never feel at home here. 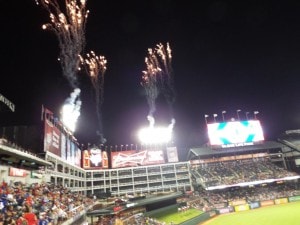 The Rangers hit a home run

So I’ve signed up to try and do a slot on the UTA radio, I visited the station yesterday and sat in on a show and had a blast with the people I met there so it seems like something I’d very much like to get involved in as my time here progresses. I’m also going to become part of the Model United Nations group which is something I did back at the University of Leicester but not at a competitive level. It seems like a great way to meet new people and travel around the U.S. while I’m here as well as something to do in my spare time. I’ve also attended games of the Texas Rangers and Dallas Cowboys (they both won!) so I am starting to feel more at home here.

So to all of you who are soon to start at the University of Leicester I would say this; don’t worry if you don’t enjoy your first week. There are many, many more weeks and almost all of them will be better than that first week. Freshers can be the best time and the worst time all at once, for even the most extroverted of people the constant meeting new people can be a struggle. You’ll probably miss home even after those first couple of days, but you will make friends to last a lifetime and mature so much in the process. So embrace the happy, embrace the sad, and throw yourself heart and soul into university life – it really will make the slightly rockier patches so much easier. Who knows, you might even be so busy with great new friends and in flashy university societies to even miss home.