Wow time really does go fast, doesn’t it? Hard to believe that it has been more than four weeks since I moved in to my new home for the next eight months. Most of these four weeks have been spent starting classes, settling in, making friends, and trying to get around. I’m lucky enough to have met so many kind and friendly people who are willing to give me rides to wherever I may need to go. However one of the hardest things about living in Texas is the lack of public transport. Texas is a petrol heads paradise, and the Dallas-Fort Worth Metroplex where Arlington is located is a sprawling mass of tarmac and concrete. The roads connecting the different towns and cities can be up to five lanes wide (so ten in total) and it seems like the entire place was built for the car. It certainly makes our slow, often late, and crowded buses and trains seem like a luxury and getting around the vast urban sprawl is difficult. Imagine trying to get around somewhere more than three times the size of Greater London without the buses or tube to help!

I’ve tackled this by purchasing a bike, and while it may not allow me to venture too far (I don’t fancy my chances in battle against an SUV or Pick-Up Truck) it has at least given me some kind of freedom to explore the outer reaches of campus and what lies just beyond. 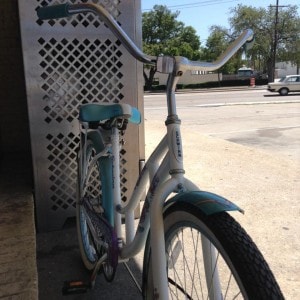 As you can see in the picture my bike is (in my opinion) a pretty neat little ride that was a bargain for just $50. I can sell it on at the end of my time here and hopefully recoup some if not all of the investment. It makes getting around the spread out campus easier, and makes me more likely to go to the gym which is now just a ten minute bike ride away. My bike has helped me out a lot, but she doesn’t yet have a name so if you have any ideas let me know in the comments!

There’s also a bus that leaves campus and connects to the airport and train station, but it only runs during the week which isn’t much of a help when I have spread out classes. Who knows, maybe one day I’ll make it in to Dallas or Fort Worth?

Compare this to Leicester. If you live in Oadby in first year, common practice for freshers, you have the 80/a bus that takes you to campus and beyond. Once you’re in the town centre you can catch a bus to most anywhere in the city and beyond, and a train to various places across the UK (and even Europe, our trains in to London connect to London St Pancras which can take you via the Eurostar to Paris or Brussels). I often moaned about the buses from Oadby when they were late (even though it was never more than ten minutes) or sighed when they were overcrowded, but oh how luxurious those bendy green buses seem through hindsight.

While I’ve been in classes almost a month, it’s only now time for freshers to kick off in Leicester – So I wish everyone just starting or returning to the University of Leicester a happy, healthy and successful semester. I’m jealous of you first years with the best three or four years or more (sorry medics) of your life ahead of you!