Fun at the Fair

Posted by Courtney in Study Abroad on October 19, 2015

One of the things I was most desperate to visit whilst here in Texas was the State Fair of Texas. Whilst most states have a fair it’s often said (admittedly, by people from Texas who can be very fond of their home state to say the least) that no state fair compares to that of Texas.

So this past weekend when I was able to visit, I jumped at the chance. It just so happened to be the last weekend of the fair so I’m very glad I went. It was a condensed version of everything I expected Texas to be and more, which was funny after living here for eight weeks and getting to know that Texan culture is more than it’s made out to be. Nevertheless it was fun to spend an evening watching hog racing, eating chicken-fried-bacon and attempting to get a selfie with “Big Tex”. Although it’s going to be difficult, I’ll try and convey a little of what the State Fair is like with the aid of pictures.

It says on the Fair’s website that outside food is allowed, but most people go to the fair for the food, and that’s probably true. Although your body will not thank you for some considerable time afterwards, the food for me was the highlight of the trip. Although sadly not old enough to buy the bacon margarita, I did try the maple bacon iced tea which was interesting but not that nice. Since this was the first and only time I’ll probably ever get to go to the state fair, I decided to go all out and try as many foods as possible. The best thing to do is go with a large group of friends and each get something different so you can try a wide variety – between me and my friends from ISI I was able to try fried Oreos, chicken-fried bacon, fried pumpkin pie (my favourite), fried brownie, fried jambalaya and a state fair corn dog. Though I didn’t eat all of this myself I’m definitely on a detox mission this week after all that! (I did restrain myself and avoid spending $30 on Chicken Fried Lobster with Champagne Gravy though!) 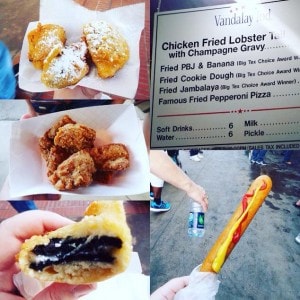 Just some of the wide variety of food available.

A large part of the fair celebrates Texas agriculture, and I was able to see lots of farm animals from across the state (as someone from the countryside of England, it made me feel a bit more at home). The highlight for me though was hog racing, which was hilarious and exciting at the same time. As someone who’s a fan of punny humour I appreciated the names such as “Donald Rump” and “Kermit the Hog”. Down home, country culture and everything that comes to mind when outsiders think of Texas (Stetsons, ranches, Cowboy boots…) can all be sighted at the fair.

The fair was so busy. My principal and lasting memory of it will be how busy it was and how many people I accidently bumped in to. I even heard a small boy say to his mother “I don’t think we’ll ever see Daddy again” as we were trying to move through the crowd which about sums it up. It’s hard to paint an accurate picture of the amount of people with words or a photo, so just think about the busiest place you’ve been in your life and double it. No, triple it.

Okay, I’m off to study for Midterms – I can only neglect academics for so long!