In Australia, Universities still have week-long breaks in the middle of a semester in order for students to catch up with any reading or watch any lectures where they’ve fallen behind in a course. However, as you can imagine, when you’re on a year abroad and a free week comes up in the middle of a semester, at least some of that time is spent getting away from the books. As a result of this combination of procrastination and wanderlust, a group of us decided to visit Rottnest Island for a couple of days. Rottnest is just off of the coast of Perth, and is a small island which used to be a military facility until it was opened up to tourists after the war. Since then, its stunning views and natural population of Quokkas have made it a must-visit location in Western Australia. If you’re a fan of anything cute and furry then you should know about Quokkas – they’re essentially small fluffy marsupials with permanent smiles. They’re wild and roam around Rottnest in abundance, however Rottnest is the only place in the world you can find them wild. So, because of the promise of cute animals, the beaches and the awesome views, we decided to set off at 5am and get the most out of the two days. 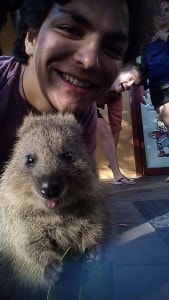 Stealing a selfie with a Quokka 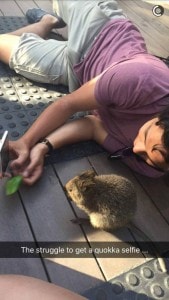 As I stumbled down the stairs at 5 in the morning with a massive rucksack full of swimming and snorkelling gear on my back, and 2 suitcases stuffed full of food and makeshift icepacks I questioned the wisdom of the outing. However, after meeting up with the eight other members of our group (a couple of Aussies, and exchange students from as far away as Denmark and Hong Kong) and getting some food down me, we caught the hour long bus trip and caught the ferry to Rottnest. As part of the ferry fare you can opt to rent a bike for your stay, so once we got off and ditched our luggage, we decided to go off on a brief cycle to visit the nearest beach and take in the views. However, once we saw the first beach and pointed out Perth’s skyline in the distance, we got a bit too enthusiastic and ended up cycling around the entire island (a full 24 kilometres).

I can’t describe how absolutely mind blowing the scenery was, but the pictures here should give you some idea: 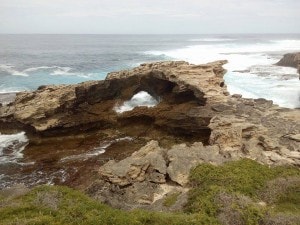 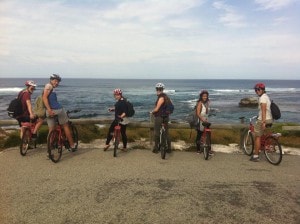 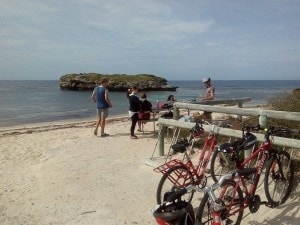 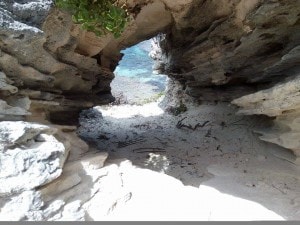 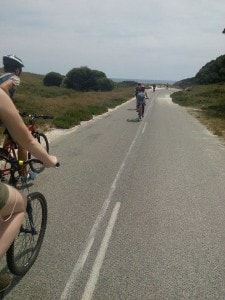 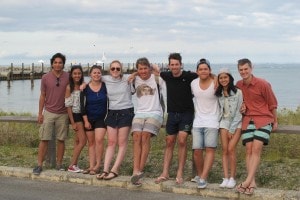 We saw everything from Ospreys to Whales to Snakes, and the waves were incredible, having come over all the way from Africa. Apart from the views, the feeling of cycling around an Island in the sun with a bunch of good friends was worth it anyway. Feeling very smug about the productivity of our day, we sat down and enjoyed the best vanilla slices in all of Australia (according to my mate Kaleb anyway). After this we headed down to a beach to relax and try out the sea. However, the sea turned out to be far rougher than we expected, and my naïve attempts at snorkelling ended with my legs being covered in small cuts from the rocks (future tip for any of you who want to go to Rottnest, watch out for the rocks!).

In the evening, we dug out the food (luckily only small puddles had accrued as a result of the ice packs) and the alcohol. In Britain, we have cheap Vodka and horrible cider that can be bought from Asda in Oadby or the Off-Licenses scattered around Clarendon – in Australia, they have Goon. This wonderfully cheap wine can be bought in 5 litre bags for as little as $15 (about £7). We’d booked a small chalet-like house to stay in for the night, and so we got out the drinking games (I tried to introduce Ring of Fire to the international students) and the next day we were all in bad moods when the ludicrous 9am checkout time came around. The next day, unsurprisingly, was a lot less adventurous. There was a lot of beach chilling, and the sea was calmer so we went snorkelling around an old shipwreck. We then went to find the nearest pub to watch the AFL Grand Final, which is a huge deal in Australia. Australian Football seems crazy to me and I can’t understand the rules at all, but West Coast, the Perth team, were in the final so I went and watched them get thoroughly outplayed. By the time this had finished, it was time to head towards the ferry and go back to Perth. The trip back was unforgettable, we got to the jetty early to get first in the queue, and managed to get the few seats at the back of the ferry where you can look back behind at wherever it is you are leaving. We got the last ferry back so as to stay on the island for as long as possible, and so for the half an hour or so we were on the ferry we got to watch the sun set over Rottnest Island as we sped away from it. 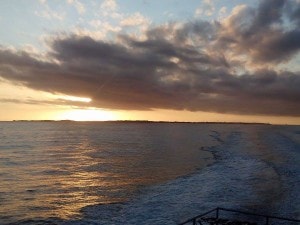 Overall, Rottnest was a pretty fantastic experience, and anyone reading this blog who is thinking of going to Perth really should manage to visit Rottnest at least once before they leave. The ferry and bike rental is relatively inexpensive, as is renting a place for the night, and it’s convenient to get to for such a stunning place. The Quokkas and the views are great, but honestly it was spending time exploring the place with a bunch of great people which made visiting Rotto so great. 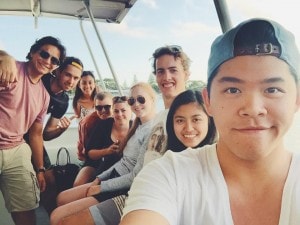