Your Homework Assignment is to Party: Studying Techno in Berlin

Anyone who knows me would be able to tell you how much I thoroughly enjoy electronic dance music, and how on any given weekend these days you would more likely than not, be able to find me dancing up a sweat in any of Berlin’s universally renowned techno clubs. Therefore moving to the city that is widely considered to be the “world mecca of electronic music” has ensured that all of my partying needs will be satisfied for the foreseeable future, with a massive variety of all night parties in legendary venues, equipped with bone-shattering sound systems and world class DJs performing every night of the week across the city. Anyone who has ever so much as googled “Berlin” will be aware of the city’s legendary reputation for hard partying and free-spirited attitudes, which has recently prompted an explosion of tourism as young night-crawlers from across Europe and beyond (disdainfully referred to by the locals as the ‘EasyJetSet’), flock to the German capital for a chance to rave the night away in historical institutions such as Tresor, Watergate, :// About Blank and of course the notorious and impregnable super-club Berghain. Whilst the somewhat cash-strapped local government is more than grateful for this welcome addition to the city’s coffers (the council recently offered Berghain a substantial amount of money for them to expand the club with, which the owners turned down), many of Berlin’s die-hard ‘techno-heads’ are concerned that these tourists pose a serious threat to the authentic and relatively noncommercial nature of the current scene.

There are entire societies, industries, groups and subcultures dedicated to ensuring that Berlin’s techno scene doesn’t go down the same path as say, Detroit’s techno scene in the 1980’s, or London’s Acid House scene of the 1990’s, which is to say they don’t want it to become a poor-quality, tightly-regulated, highly-commercialised, soulless and expensive shell of it’s former self. This is seen as being of vital importance not just because the current nightlife scene is fun and egalitarian in a way that few others are anymore, but also because the current issues facing it are deeply connected to the wider picture of the gentrification of Berlin.

I am mentioning all of this here in order to emphasize my love of Berlin’s nightlife in both a recreational sense and as an aspect of recent German history and sociology, because a class I am currently taking at Humboldt University perfectly embodies both of these and is quite possibly the most fun and engaging class I have ever taken. The course, entitled ‘Studying Popular Music of Berlin’, is taught by Bianca Ludewig, a veteran of the Berlin nightlife circuit, as well as a DJ, radio host, and writer for numerous music magazines – I figured this class requires special mention above the many other interesting classes I’m taking because it is simply a totally unique and thrilling learning experience. This, like many of my other modules here, is a very hands-on and immersive experience, where our study projects and education regarding this central topic of Berlin (and indeed German) history, will take us through the offices of magazine editors, record stores, radio stations and most importantly, on ‘field trips’ to some of Berlin’s most famous clubs and electronic music festivals. A project I am particularly excited about at the moment involves me and study buddy spending a friday night at either Tresor or Berghain, recording our experiences and being able to have some one-on-one time with the owners of these establishments to discuss their colourful history, an opportunity which I know many academics and music enthusiasts alike would kill for, and I am very grateful to have given to me.

I’ve discussed this now just to give readers at home a sense of the kind of exciting and deeply interesting kind of study that is available to you should you choose to do an Erasmus year abroad, and to remind you once again that going abroad for the year is a decision you will not regret. Auf Wiedersehen! 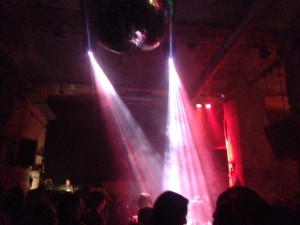