Last month I turned 21. I both looked forward to and dreaded this birthday. Like most people, I enjoy birthdays, whether it’s my own or someone else’s. It’s a guilt free day of eating, drinking, and generally having fun. But this birthday was different. I was turning 21. Anyone over a certain age will tell you that this is the prime of your life, you’re young and free. But I had a depressing thought; the next ‘big’ birthday I’ll have after this is 30. A friend asked me ‘Doesn’t my 25th count as a ‘big’ birthday?’. Nope, sorry, we’re all on a downward spiral from now on.

Anyway, enough pessimism, because I am young and free and I’d be spending my 21st birthday in the South of France with some old friends and new! …But that was exactly it. I was worried I’d be feeling a bit sad and homesick as I’d be spending my birthday so far from home. The past two years I’ve spent it at Leicester, which was fine because I was still in the UK. This was completely different, and even though I was far from home, I had nothing to worry about. I started getting birthday cards in the post. The only post I’ve had so far since being here have been from the water company. I was rather annoyed that they forgot to send my birthday card. As soon as it turned 12am I started getting phonecalls from family, and as soon as it turned 1am I started getting Facebook notifications from people posting on my wall back in the UK. Even though some of these posts are thoughtless as a result of a Facebook reminder, I got some lovely messages that I really appreciated. It’s the little things!

The Year Abroad tends to be in you third year of studies, so if you haven’t already done a Gap Yah or done another year in school, you and all your friends will be turning 21 that year. This means that you’ll miss a whole year of 21st birthday celebrations at home. I’ve already missed a couple of my friends’ 21sts, which is upsetting. But life goes on, and I’m pretty sure they’ll let you off for not attending!

Overall, I really enjoyed my 21st. It was unlike any other birthday I’ve had, but that’s true of everything that happens here. And it’s true that all my worries of feeling lost and homesick vanished as soon I was presented with this beauty of a cake… I chose my friends well! 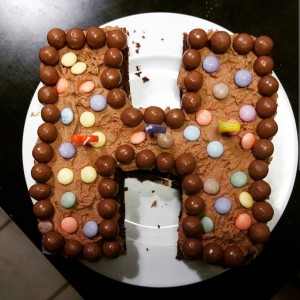