Regrettably I haven’t done very much travelling during my time abroad so far, largely thanks to the endless number of distractions available here which have kept me firmly within the so-called Berlin Bubble. However I made some steps towards rectifying this sorry situation last weekend by meeting my sister (currently on her own year abroad in Rotterdam) in Hamburg, Germany’s somewhat overlooked second-city that is oft-referred to as Berlin’s trashier and grimier (albeit slightly prettier) cousin. For those considering a Deutsch-trip beyond the sometimes-overwhelming capital city, Hamburg is an obvious choice; this easy-going ‘Venice of The North’ is home to 1.7 million people and unsurprisingly is host to a large number globally-renowned galleries, museums, restaurants and nightlife venues (which I will discuss later), as well as having a much more distinctly ‘German’ flavour than Berlin (in the traditional sense anyway).

One of the first things people will mention as being one of the best aspects of studying on the continent is the ludicrously cheap train travel (in comparison to the prohibitively and depressingly expensive rail prices in the U.K.) and Germany is no exception, with the almost 200-mile journey from Berlin to Hamburg costing around 29 euros for a return trip with Deutsche Bahn, which takes less than two hours thanks to that famously efficient German engineering. Once your train has glided in to the monstrously large Hamburg Bahnhof you may feel at a loss as to what to do next in this sprawling metropolis-by-the-sea, at which point you should direct yourself to the following list of activities and attractions which I believe encapsulates the best that the city has to offer, in order to make your time in the Tor zur Welt (Gateway to The World) as fun as possible.

If like me you’re somewhat of a Culture Vulture, then Hamburg is an ideal place to soak up some of the best art and history that Europe has to offer, with the ‘Big Three’ museums helping the city to punch well above its weight in terms of cultural contribution. In order to fully absorb the colourful, dramatic and at-times painful history of the city, your first port of call should be the Hamburg Museum, a sprawling institution located in the beautifully manicured ‘Plants and Flowers’ park in central Hamburg which constitutes the largest museum in Germany in terms of exhibits. A trip to this impressive art-deco palace can easily eat up several hours as the meticulously-planned exhibitions gently walk you through Hamburg’s humble beginnings as a backwater trading outpost to the cultural and economic titan it is today – certainly a must-do for anyone interested in seeing how Hamburg has shaped the world. The other two institutions are the equally massive Kunsthalle and the Museum fur Kunst und Gewerbe, which both showcase mind-blowing collections of world famous classical and contemporary art from Hamburg and beyond, as well as sculptures, furniture and films stretching back to 5000 B.C. up to the modern day.

Whilst I don’t have the time to describe them all here, anyone interested in Hamburg’s thriving art scene should also hit up the Vera Munro Gallery to see the best of Hamburg’s hottest new creative talents, as well as the Ernst Barlach Haus for one of the world’s largest collections devoted to German Expressionism – for those with more risque tastes I would recommend a visit to the always-stimulating Erotic Art Museum, a sister branch of the more famous collection in Paris. For all of these places I would remind you to bring your student I.D as, like pretty much anywhere in Europe, entry fee is greatly reduced for students.

However if you would rather experience some of Hamburg’s culture and history without spending a penny then the city has you covered; whilst there is a wide-variety of free-events ranging from concerts, to art shows and cultural displays celebrating Hamburg’s rich history to be found on the city’s website, I personally would recommend a walk around the iconic and breathtakingly beautiful (and moody) Speicherstadt (pictured in this post), which is the largest warehouse district in the world comprised of 630,000 sq metres of crumbling Victorian-era warehouses in a maze of canals, which have largely been re-purposed as a myriad of drinking, dining and entertaining venues. You can also explore the iconic Church of St Michael free-of-charge, a masterpiece in towering baroque architecture which is considered by many to be one of Northern Europe’s most beautiful churches (if you’re into that sort of thing).

I’m currently running out of time and space, but will be going more in-depth shortly when I post about where to find some of Hamburg’s best dining spots and watering holes, as well as the best of the city’s eclectic and unforgettable nightlife. Auf Wiedersehen! 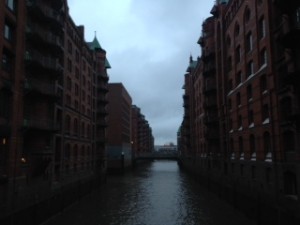