Back in Berlin after Being Home for Christmas

Hello and I hope you all had a great Christmas – I flew back to Newcastle to see my family and friends for the first time since August and spent the bulk of the festive period either eating and drinking, or trying to update my loved ones on the last four months of my life as efficiently as possible (this often meant I found myself repeating many of the same stories and impressions of Berlin over and over again to various people). Whilst it was of course lovely to be surrounded by Geordie accents again and to enjoy all the little British-isms that I’d sorely been missing, what really felt odd was just how surreal it felt to be back in the U.K, as I have well and truly made Germany my home at this point (when I mentioned to my mother that I was flying back “home” to Berlin on Sunday she could barely conceal her anguish).

Whilst I by no means felt out-of-place in the U.K (especially given that the culture and society of Germany is probably more similar to the U.K than any other country on Earth), the fact that I spent the holidays thanking all my waiters in German and adjusting the cost of everything to Euros shows that I have certainly been a German for longer than I thought. Of course I’m also not saying that I have assimilated seamlessly into German society, as this is far from the truth, and culture shock and language barriers are still daily obstacles in my everyday life. I’m simply realising that I’ve reached that stage that our Erasmus coordinators warned us about prior to leaving; a weird kind of limbo where I don’t really feel at home in the U.K, but also certainly do not feel like a German. This isn’t necessarily a bad thing as I don’t feel uncomfortable or out of place anywhere, and I have a large group of international friends who are mostly in a similar position – it’s just a strange observation that has recently got me wondering how I will feel when it is time to leave Germany for good in 7 months time.

I arrived back in Berlin on Sunday evening, and the biggest readjustment I have had to make since then is climate related! Following an alarmingly warm winter in England I had forgotten how cold Berlin can get at this time of year, so stepping off the plane into temperatures of minus 10 degrees Celsius (!) was a shock to say the least (my reaction to first feeling this cold was clearly audible to all of my fellow passengers). Since getting back I am in a similar position to most of you at Leicester, in that I am currently drowning in revision and living in the library in order to get essays done in time. 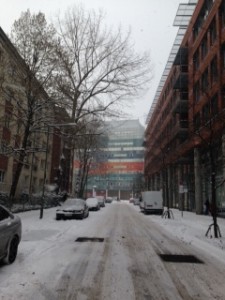