An Ode to Club Mate

After four months here I think I’ve finally figured out what it is I’ll miss the most about Berlin – not the currywurst, the street art, the free-spirited nature of Berliners, or even the techno clubs. Nope, the thing I’ll pine for most when I’m gone costs 1 Euro and comes in a little glass bottle, and that thing is the notoriously addictive and hyper-caffeinated miracle potion known as Club Mate (pronounced ‘klub mah-teh’ for the non-German speakers among us).

Drinking this on the u-bahn during your morning commute may draw some disapproving stares from the uninitiated, given that it looks suspiciously like beer, but Club Mate is actually a high-caffeine iced-tea drink based on the famous Mate Tea which is popular in South America. Whilst I had never even heard of this drink prior to my arrival in Berlin, it burst onto the Berlin club scene in the early 2000s and has since achieved somewhat of a cult-following among the populace. Initially used by hardcore party-animals who required the high amounts of energy it offered to keep on dancing into the early hours of the morning, these days you can poke your head into any office, classroom, or University library in town and expect to see dozens of these famous blue-capped bottles sitting on desks, as the cheap and refreshing alternative to comparatively unhealthy energy drinks which has rapidly replaced coffee to become Berlin’s caffeine-fix of choice.  Whilst beforehand you would rarely catch me in Leicester library without an extra-large Redbull or family-sized cup of coffee to get me through the long days and nights of revision, nowadays I can’t possibly leave the house without one of these glass bottles clunking away in my backpack.

I have introduced this refreshing elixir to many of my friends, and what is notable is that whilst they most often do not initially like the taste, they quickly become accustomed to it and learn to Love the Mate – I am aware that such patterns are frequently observed in consumers of beer, coffee and cigarettes, possibly indicating the dangerously addictive and caffeinated nature of the beverage, but I just can’t say no when 1 Euro is all its costs to keep me alert and active all day via tasty refreshment. It also comes in a variety of flavours, such as cherry, banana, the hard-to-place “winter” flavour, and a variety of quasi-mythical ‘limited addition’ flavours which me and my fellow enthusiasts are desperate to locate, and can only be found in select “Späti’s” (notorious 24-hour convenience stores found in any neighbourhood with more nightclubs per square mile than people). Anyway, this was my brief ode to Club Mate, which even now I am sipping on as I type, and I hope this post piqued your interest in something I am fanatically 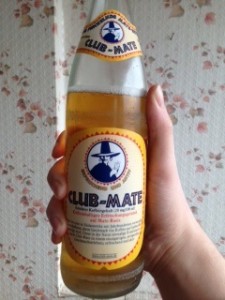 (Disclaimer: this was NOT a paid advertisement by Club-Mate ltd. – I just really love this drink.)