Barcelona tomorrow? Yeah, why not?

This semester I made a promise to myself to be more productive and make the most of my time living in Europe. This week, I have done exactly that. How, you ask? Well, at 8pm Tuesday night I booked to go to Barcelona….the next morning. I’ve never done anything quite as spontaneous as that, but tickets were reasonably priced and I’ve always wanted to go.

We were going by bus. Not the quickest from of transportation but definitely the cheapest. The good thing is that this OUIBUS had USB plug sockets so I could charge my phone and, most importantly, it had Wi-Fi. I didn’t know a moving vehicle such as a bus could even have Wi-Fi. We thought we were living in the future, and we were loving it. 7 hours later we arrived at Barcelona and made our way to our hostel. Hostels aren’t exactly my preferred type of accommodation. I’m a bit precious, I’d rather have a private hotel room and an en suite but hostels are cheap and as my mother pointed out ‘that’s what young people do’, so that’s what we did. I was a bit anxious of sharing a room with four other people. I wasn’t sure I’d fit in with the young and cool, dreadlocked traveller sort, but when we got there most of them were older. And by older, I mean in their 40s. I found that a little strange, and some of them were strange. We kept interactions to a minimum.

Feeling confident after organising our transport and accommodation, we navigated the moonlit streets of Barcelona to find a recommended tapas restaurant for our first meal. We found it with ease, strolled in and were greeted by the waiter.

We froze, looked at each other and said ‘Ummm’. Eventually the waiter asks ‘Table for two?’. Yes please. I did a GCSE in Spanish and studied it last semester yet I couldn’t remember anything. Spanish is clearly not my forte. By now I can feel somewhat confident when I explore France, so it was kind of odd being surrounded by people speaking languages other than French. Having said that, I think I heard more people speaking English in Barcelona than Spanish.

For daytime exploring, I wore my camera around my neck while Rachel clutched onto her map. All hope of fitting in with the locals was abandoned; we haven’t been exposed to enough sunlight yet for that. So we went for the tourist look. We explored the sites, such as la Sagrada Família, Gaudi’s buildings, Parc Güell, the Gothic Quarter, and we got to see the sea. I also have a friend living in Barcelona for his year abroad so we contacted him and met up for a little Leicester reunion. It was also helpful having someone who knew his way around, we had our very own tour guide. 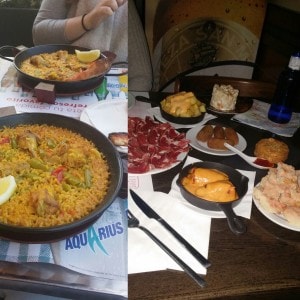 Guilty of taking photos of food

The best part of the trip was the food, obviously. I’ll give it to them, the Spanish are pretty, pretty good at tapas. And paella. And churros. And burgers, actually. Oh, and Cava. At Makamaka Beach Burger Cafe, a bottle of Cava was the same price as normal white wine, and in a local off license it was 2.15€ a bottle. Not bad at all. No one can say I didn’t try the local cuisine.

As with anything, we had our ups and downs. The main downer being that our 7am alarm didn’t go off so we woke up at 8.30am Saturday morning to catch our bus back to Nîmes at 9am. It wasn’t my finest moment, still wearing my pyjama top as we rushed down the road with our suitcases trying to find a taxi to take us to the station. But we made it, which is all that matters. At the time it was stressful, but I can already look back at the situation and laugh. All in all it was a successful trip, and one of the best decisions we’ve ever made. All I need now is a week in bed to recover before I even think about being that spontaneous again.