Duel in the Swamp

Leicester’s varsity kicked off last Sunday with the Leicester Longhorns bringing home the first win in American football. These next two weeks are now packed with many other sports going head to head with their DMU counterparts. If you’re interested in going to watch any of them, you can see the schedule of events here.

Similarly, on Saturday the University of Florida crew team I am now a part of had their varsity against their rivals, Florida State University from Tallahassee. This year the event, dubbed Duel in the Swamp,  was also attended by University of South Florida, University of Central Florida and Embry-Riddle Aeronautical University. The day started early, rigging boats in the pitch black and freezing cold (featuring frost, which I wasn’t even convinced was possible in Florida) making me quickly regret my choice of wearing sandals! The course was 2000 metres, there were 11 events, and in true rowing style we were running late from the first race. Mainly because we were the only club used to wet launching (walking into the water carrying your boat and then climbing in, rather than off a dock). I was racing in the varsity women’s 8+ and 4+, which went very well and pretty similarly. At the start we all kept pace with each other and there was no clear leader, but after 200m or so the our crew started to pull away and that was that for the race as the gap only lengthened. The rest of the results were just as pleasing, as every other women’s race was won by a UF crew! 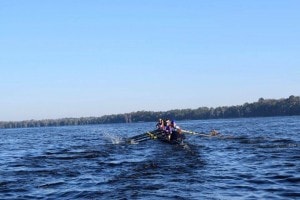 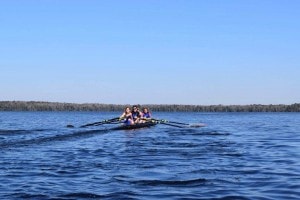 In England, when you win a boat race you usually win a pot, that is a ceramic or metal tankard decorated with details of the race you just competed in. Here in America they do things a little differently. You go into the race betting your shirt that you’re going to win, then if you do in fact come first you win the shirts that the people in second place and below bet. It feels a little strange to be walking around in another teams kit, so I definitely won’t be doing so on campus (the orange and blue is very strong there!) but I am not one to say no to a free t-shirt!

Unfortunately, Leicester’s rowing varsity has not gone in our favour the last couple of years, but it has been close. This year there has been very positive outlook, good coaching and strong results from all races that have been done from all squads so far. We can take it back. If you want to witness it, be at Leicester Rowing Club on Upperton Road at half one on the 12th March. There is also a Facebook event you can join to remind you!

The other event I always try to make it to is the rugby. I’m a fan of the sport (not as much as rowing) but as it’s at the Leicester Tigers Stadium with lots of people watching it’s definitely worth it! I would advise you wrap up warm though, because standing in the cold for two matches can take a toll after a while. This year it’s on March 9th, and tickets are available from the SU.

Are there any events you plan on attending? Let me know in the comments!