It’s been a while! Whilst I have unfortunately been neglecting by blogging duties recently and making the most of my (very generous) two months off uni and travelling about, I now have a lot more exciting experiences to share with you. I thought I’d start by recapping my recent trip to Bratislava, the capital of Slovakia, a wonderful, friendly city which manages to boast all the benefits of a cosmopolitan metropolis whilst retaining a charming, small-town feel. This is a city that is bursting with a massive variety of history and culture as, like many other central European capitals, it has changed hands between many different rulers over its complex and tortured history, meaning that you’ll find many characteristics of the Ottoman East as well as the Germanic West. Only an hours flight from rainy Berlin, we landed in comparatively tropical weather, and immediately set our sights on soaking up the history and culture by day, whilst enjoying the vibrant party-scene of this surprisingly hip city by night. My first full day in the city will stand out as the most memorable, which involved us exploring the beautiful and ominous Bratislava Castle during the day, and then returning in the evening in order to dance the night away at SubClub, a techno institution (that I was first informed about by my techno teacher) housed in a disused nuclear bunker beneath the castle cellars, originally intended for the Communist party elite during the height of the Cold War. Whilst the DJ’s weren’t as good as the Berlin variety, SubClub has very close ties with pioneering superclub Tresor (coincidentally located next to my apartment) and as a result the atmosphere and soundsystem pretty unforgettable. Other memorable moments include a trip to Primate Palace, an elegant neoclassical palace where the mayor lives, the beautiful old town, and eating some killer Thai food, a cuisine which is very popular in Bratislava, owing possibly to the dubious quality of Slovak food (my boyfriend tried a traditional classic known unappetizingly as a ‘Shepard’s Bag’ which tasted exactly how it sounds). Other than this, I would also warn fellow travelers that, despite the city’s rather unflattering depiction in Eurotrip, it is surprisingly expensive, possibly a result of it being an hour away from one of the world’s most expensive cities, Vienna (which I also visited) – so bring plenty of Euros! 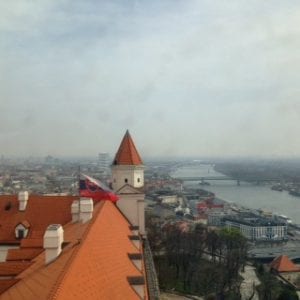