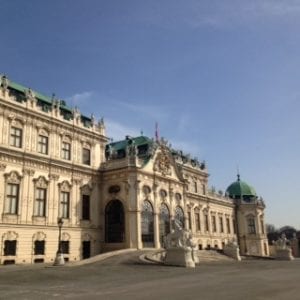 Consider this a continuation of my previous post regarding my recent trip to Bratislava, given that we traveled straight to Vienna from here via the popular commuter train service which runs regularly between the two cities, taking just over an hour. Of the two cities, Vienna was undoubtedly my favourite, owing probably to the vibrant cosmopolitanism of a global city that just isn’t available in Bratislava (and the fact that everything there is in German, a language I have a much less shaky grasp on than Slovakian). One of the key things that stood out for me (and most visitors to The Musical City) was the breathtaking beauty of the place, with a rich collection of surviving baroque, neoclassical and rococo architecture due to the lack of combat experienced in Wien in World War Two, with the result being that it was very difficult not to break into a round of applause every time I turned a new street corner. Much of the city’s cultural and artistic heritage is centered around the myriad variety of imposing and impossibly elegant palaces which dot the city, with the best and arguably most famous being the Schloss Belvedere close to the city centre. This long time summer residence of the notorious Hapsburg dynasty houses one of Austria’s largest art collections including Gustav Klimt’s masterpiece The Kiss, and the adjoining gardens are a wonderful place to spend a day (especially when it’s almost 30 degrees out, like it was when I was there). Other must-dos include the Kunsthistorisches Museum which houses 4000 years of European and African Art in a colossal palace, and the Museum of War if you want to learn more about Vienna’s little-known position in World War Two and the Anschluss. Vienna may be elegant to the point of being dreamlike, but this comes with a heavy price tag, given that it is one of the most expensive cities in the world, therefore it was important for us to find bars and eateries with a student pricetag. In order to save pennies we found it best to simply live the same way as students from the University of Vienna, which meant frequenting cheap student bars and restaurants such as Tunnel and the Nachtsmarkt, where you can easily have a generous meal and some drinks for under 20 euros. Vienna also has a reputation for being stuffy and somewhat dull, so we decided to explore some of the hipper aspects of the nightlife to see what we could find, and ended up at Donau, a supposedly legendary techno institution in the south of the city. Whilst the decor was cool and the DJ was semi decent, we found this place to be seriously lacking in any vibe (at least compared to Berlin) and overall rather dull. If you’re gunna have a night out in Vienna, stick to the cosy cafes and bars. Anyway, I’m back in Berlin now, and had a wonderful trip to central Europe during my Easter break, hope you enjoyed reading!