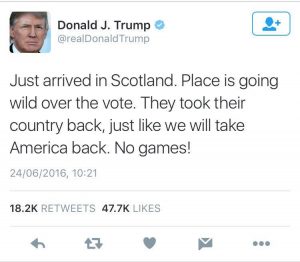 I’d feel remiss if I didn’t discuss what the result of the referendum on membership of the European Union means. However, with Article 50 yet to be triggered and negotiations about border restrictions, visas, and trade yet to begin it’s hard to say what leaving the EU will mean for University of Leicester students wishing to study in Europe. Instead, as study abroad blogger for the United States, I decided to canvas the opinion of friends across the Pond about what Brexit means for the future both here and there.

The 2016 presidential election season is well and truly upon us, and both the Democrats and Republicans have presumptive nominees in Hillary Clinton and Donald Trump. One candidate in particular, Mr Trump, has been vocal about his support for Brexit – in an email to supporters subscribed to his email list last week he said

“These voters stood up for their nation – they put the United Kingdom first, and they took their country back.”

Much of the discourse surrounding the impact of Brexit on America boils down to parallels drawn between the rhetoric of “taking our country back”; a rallying cry of the right wing populism that has spread across the Western world in the wake of the financial crisis following 2008. Some discussion has centred on opinion polling and the idea of the ‘underdog’. Trump is behind in the polls, as was vote leave as ballot stations closed, and some have said that therefore opponents of Mr Trump ignore him at their peril. Trump himself in his email and his tweet explicitly draws parallels between the two, and I’ve linked several articles at the bottom of this post connecting Brexit and Trump. In the week since the referendum, Philip Hammond, the British Foreign Secretary, has already met with his American counterpart John Kerry and has assured the public that the ‘special relationship’ will remain very much intact.

So with this in mind, what do Americans think of Brexit and what it means for both the UK and the USA?

Grace said she was concerned in the surge of hate crimes that have been reported across the UK since the result was announced, and is concerned that the anti-immigrant rhetoric used by Donald Trump in the United Sates may have a similar effect there. She goes on to say “it sometimes makes me think that the U.S. has no hope now,” and concluded that the EU referendum result could be considered a win for xenophobia and empower Trump.

My friend Natalie also shared her concerns about xenophobia with me, and talked about the close nature of the result and the fact some people who voted leave have publically said they regret their decision. Natalie is concerned about the devaluation of the pound and “ruined” stock market, and the impact the economic turmoil could have on American 401ks (retirement packages). She is also disappointed that the EU cultural funding could be withdrawn from Game of Thrones (a concern I’m sure a lot of you share!).

Another one of my American friends, George, was somewhat of an anomaly and said that Brexit was a good thing. He sees the EU as a “giant super state with no accountability to the people of Europe” adding “Trump called it correctly” and concluding by talking to me about the negative effect the involvement of Barack Obama might have had for the remain vote.

Finally, Kendra discussed much of the same concerns over xenophobia and the focus on immigration during the campaign. She told me that the period of Trump’s ascendency and Brexit feels like “a fever dream” and she can’t understand why Trump is as popular as he is. However, Kendra conceded that it was easy to say that from her North Eastern leftist/radical enclave and that people across the United States feel that something has gone wrong in the country and that voices from the leftist side of the debate need to better galvanise Trump areas of the nation.

So that’s it for now, just some voices from across the Pond and their thoughts on what Brexit could mean for them. I’m sure you all have opinions on Brexit so feel free to chime in in the comments!