It’s the middle of the summer, which means no University to blog about, and my summer job means that I haven’t been doing anything all that interesting apart from work. So with that in mind, I decided to do something different and review a fantastic docu-drama I watched this past week.

The film, shown on Sky Atlantic, is called ‘All The Way’ and it focuses on President Lyndon Baines Johnson’s efforts to force the 1964 Civil Rights Act through Congress. It was based on the play of the same name by Robert Schenkkan, who wrote the teleplay for the screen version, and was directed by Jay Roach. As someone who’s been a long-time fan of LBJ I was thrilled when I heard the play had been adapted to television and Bryan Cranston of Malcom in the Middle and Breaking Bad fame would be playing the President. 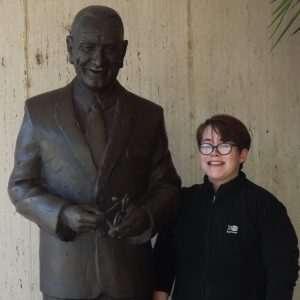 At the LBJ Presidential Library and Museum in Austin, TX

All The Way comes in at over two hours ten minutes, but it’s so well paced that the time flies by. The strength of the film comes from Cranston’s fantastic performance as Johnson, the beautiful cinematography, and the focus on one significant issue. Rather than confuse the plot and dilute the significance of the 1964 act by allowing it to star alongside other legislative and policy issues that were beginning to gain significance (for example, Vietnam), the narrative focuses almost solely on Johnson’s desire to push the legislation despite allusions to Vietnam and other events of the time. The act is necessarily framed alongside the Mississippi Freedom Summer and the murders of James Chaney, Andrew Goodman, and Michael Schwerner but the legislation remains at the forefront of the film.

Never having read or seen the play, I was unsure what to expect when I began watching All the Way, however I was pleasantly surprised that it does not shy away from difficult issues. Martin Luther King is shown in all his complexity, and his adultery is openly acknowledged. Johnson too is a detailed character with his contradictions and faults laid bare. The narrative also does a good job of highlighting the significance of other people during the time period, such as Fannie Lou Hammer and Dave Dennis, without becoming overly complicated and detail focused or falling into the trap of focusing on the ‘great men’ that historical dramas are so often guilty of.

Overall, I thought the film was a fantastic account of this very specific period in American history. It distils a complicated and rancorous time in American political history into an easily digestible two-hour film without omitting any of the crucial events or details (in my opinion).

Did you watch All the Way? What did you think?

Have you seen any dramas or documentaries relating to your course of study? Let me know in comments!