Hello from the Other Side of the World!

Posted by Joseph in Study Abroad on September 4, 2016

My name is Joseph and I’m in my third year as a Geology student at the University of Leicester. However I’m currently studying about as far away from Leicester as I could get without leaving the planet! This is because I’m doing a year abroad studying at the University of Canterbury in Christchurch, New Zealand as an exchange student. I’m looking forward to blogging about my time in New Zealand and sharing my year abroad adventures with you, so stay tuned to follow my adventures.

I’ve been in Christchurch since the beginning of July, after months of anticipation and preparation, packing as much as I could into 30 kilograms and flying for 30 hours across the world (Manchester to Christchurch via Dubai, Bangkok and Sydney). After a few days of recovering from jet lag, adjusting to my new surroundings and enrolment and induction sessions I was straight into lectures a week after I arrived in the country. If you’re wondering why I’ve missed out on most of my summer holidays, it’s because the academic year here in New Zealand runs from February to November. This means I’ve started in the second semester of this year and have to wait until November for my summer break. Then I’ll do the first semester of next year before heading home to start my fourth year in Leicester.

Christchurch is a very exciting city to be in at the moment. Following the major earthquakes which shook the city in 2010 and 2011 lots of buildings have been demolished and much of the city is in the process of being rebuilt at a cost of many billions of dollars.

The remains of Christchurch Cathedral (Left) damaged in the 2010 and 2011 earthquakes and the new cardboard cathedral (Right) which was built whilst the fate of the original cathedral (demolition or restoration) is decided.

When I first arrived I was surprised how much of the city centre was still derelict buildings and piles of rubble even five years on from the earthquakes. However the rebuild is in full swing with the skyline dominated by cranes working around the clock. All the new buildings are subject to regulations to make sure that if another big earthquake hits Christchurch there won’t be as much damage. I took me a bit of time to get used to the risk of earthquakes here, but for New Zealanders it seems to be part of everyday life with notices about what to do in the event of an earthquake as common as fire safety notices. 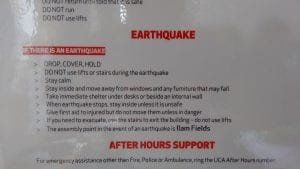 Drop, Cover, Hold – What to do if an earthquake hits

New Zealand’s position on the boundary between the Pacific Plate and Indo-Australian Plate where two slabs of the Earth’s crust are being forced together means that earthquakes hit the country frequently, with around 150 every year that are large enough to be felt (but a lot more smaller ones). As you’ve probably heard there was a Magnitude 7.1 earthquake off the coast of the North Island a few days ago, which caused a tsunami warning but thankfully there wasn’t serious widespread damage. As a Geology student I find it quite exciting being able to see first hand how much of an impact Earth’s tectonic forces can have on humans in a city such as Christchurch.

As well as studying I’ve been spending plenty of time exploring Christchurch and other parts of South Island, which I’ll tell you more about in future posts. See you next time!