Getting to know Aussie life

Posted by Kitty (Australia) in Study Abroad on September 14, 2016

So I’ve been here for seven weeks and I’ve had to get to grips with a lot of things that don’t quite match up with how they’d be in the UK. Most of the time it’s been fun and all part of the experience I was expecting. And sometimes it’s been quite confusing and even tiring, because there can just be so much new stuff to get to know.

There are three things though that I didn’t realise would be quite so different and it’s taken a while to come to terms with it (and some I’m still getting to know).

Bear with me on this one, because I know it sounds strange to struggle with a supermarket. Admittedly it’s not quite like walking into a shop in Italy or France and not having the foggiest what something even is unless there’s a picture or you have a dictionary to hand. Instead it’s that everything walks this awkward line between being familiar and also completely alien. The main thing is that I just don’t recognise any brands, so whilst I might be familiar with the food, I don’t know if it’s actually any good. That means buying a lot of things is a bit of a leap into the dark, but I’m learning quickly: getting Tim Tams = best decision of my life, buying some weird sea salt rice crackers = never again. Then there are a select number of things that I recognise, buy, and then am so disappointed in when they taste completely different to at home (Dairy Milk, I’m looking at you here). So whilst I cautiously try new brands and Australian snacks, I do occasionally pay a visit to the British section of the supermarket. Even though it’s super small, I can stand there for a good ten minutes choosing what to buy (everything’s more expensive as it’s shipped over so it’s not like I can just buy it all). When I first tasted Marmite again (because Vegemite is definitely not the same) it was great big taste of home. Shortbread as well – I hardly even eat shortbread but when I saw it I just had to have it. I’ll keep on persevering with the supermarkets and Australian food, but so glad I went for a catered college option as it’s got me out of tens of trips to the shops. 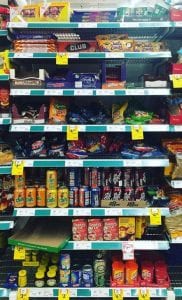 British food in an Australian supermarket

This one is now far less of a problem, but it was strange having to come to terms with a new system in a new country. For the first week I would ask people what modules they were enrolled in, but I’d always get a blank look until I remembered and corrected myself; they’re called classes here (and just about everywhere else in the world) not modules. Then there’s the grading system – no 1st or 2:1 stuff here, it’s all a series of letters. I was confused when I overheard someone saying they had got a C in a class last semester and were gutted because they were only a few marks off a D. That seemed the wrong way round to me! Turns out ‘C’ means credit, and ‘D’ is distinction. There’s also a ‘P’ – pass, and a HD – high distinction.

Then there are lots of little things, like how the library works, how to submit essays and whether or not they need to be anonymous, how to go about finding out what grade I got on a piece of work. Because it’s second semester here I’ve joined at an awkward point and I think it’s slightly assumed that you know what you’re doing by now. Fortunately, classmates/people in college/tutors are more than happy to help, but it’s definitely strange getting to know a knew university when I was so comfortable at Leicester.

You’d think I was in for an easy ride because everyone here speaks English and so no second language to have to speak. And whilst most of the time that is the case, Australians also use a lot of slang. Throw in to the mix the Americans I’ve got to know and sometimes it feels like there are three completely different versions of the same language going on. I’ll just leave this video here to give you a bit of an idea of what I encounter on an (almost) daily basis.

One response to “Getting to know Aussie life”