Before I came to Australia, I didn’t really know much about Aboriginals and how they were treated today. Obviously I knew that they were the original owners of the land before it was taken over by the British but I was still under the impression that Aboriginals weren’t really members of society, that they only lived in remote areas and that white Australians didn’t really care that Aboriginals were previous owners of the land. But from my experience being here so far, I can see that some Australians believe it’s really important to acknowledge the Aboriginal land owners and from speaking to some Australians, I have learnt that they are trying to deliver services such as health care to the Aboriginal people in an appropriate way. Moreover, I learnt that Aboriginals do not only live in remote areas, in fact, I live with a few in my accommodation. 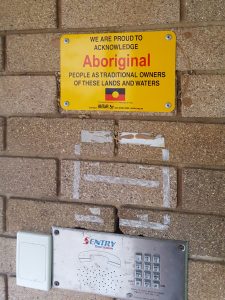 Since experiencing Australian people’s attitudes towards Aboriginals, I was really keen to hear an actual Aboriginal’s opinion on Australians and what they have experienced. That led me to attending a talk on Aboriginal people held by my accommodation. The purpose of the talk was to gain insight into Aboriginal culture and traditions but I found that I received more of a history lesson which was rather interesting, depressing and thought provoking. The talk was led by an Aboriginal elder called Aunty E whose real name is Elaine Chapman. She’s 69 years old and looks like a normal white lady which she explained was down to her father who was Scottish (but she has never met him) and her mother who is mixed as her grandmother was Aboriginal and her grandfather was also a white man.

Aunty E started by telling us about when the British boats first arrived and although the Indigenous people threw spears, the British still held the belief that the land was inhabited and claimed it for the King. She then went on to explain how there used to be 600 languages within the Aboriginal people but probably only 200 languages have survived because traditionally things were passed down orally but when some young children were brutally taken from their families, they were forced to speak English and were punished if they spoke in their native language so this caused a loss of many languages for the Indigenous people. However, she mentioned that these young children were lucky because some babies’ bodies were dug into the ground with only their heads above the ground which were used to play polo using the barrel of a gun as the stick (I know, I was horrified as well).

She also spoke about modern day Australia and how even though it’s a big thing in Australia to acknowledge that the land belongs to the indigenous, many Australians still do not like to talk about the history and refuse to involve Aboriginal history in the curriculum. Moreover, she expressed that even though the government are offering help to Aboriginal communities in the form of health care and education etc. they still don’t allow them to learn in the way that works best for them and use westernised approaches even though its incompatible with the culture and the languages that they currently use.

The talk really opened my eyes because I thought there had been so much progress, which is true but there is still so many issues that exist which are due to the attitudes of so many Australians who believe that Aboriginals should be happy with what they’ve received and that the Aboriginals should get over the past and move on. Aunty E explained that she really wants to raise young peoples’ awareness of the issues that still exist as she believes that we are the generation that can make a difference. There’s probably not a lot that we can do from the UK but if you’re considering studying abroad in Australia I would definitely recommend getting involved in anything where you can learn about Aboriginal history and culture or even any activities where you get to meet some Aboriginals.