What I’ve Learnt From Travelling

Posted by Ogechi in Study Abroad on September 30, 2016

So since Monday 19th September, I’ve been on spring break so I’ve had two weeks of relaxing, travelling and a little bit of studying – it’s a break after all!

If you remember in my first blog post, I spoke about my fears regarding travelling and how I didn’t think I was an adventurous person. I feel like I have overcome my fears a little and I’m actually surprised at how far I’ve come along as I’ve actually travelled a few places since that first blog post. Now not all of my travels have been successful (I swear Melbourne is a cursed city) but some great stories have come out of that and some really valuable lessons that I want to share with you.

But first if you’re someone like me, a student who wants travel places but you’re not really sure how to go about planning it and you don’t really feel comfortable going alone, I would definitely recommend joining your university’s study abroad/exchange society (if they have one or something similar) because they plan organised trips where you get to meet and travel with other international students and the trips tend to be reasonably priced too (in my experience). So far with my university’s exchange society, I have spent the weekend visiting the Blue Mountains in Katoomba and I had so much fun because I made new friends, I really enjoyed the activities and the organisers were super nice as well. 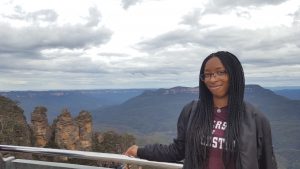 Me and the Three Sisters

The following weekend after I visited the Blue Mountains, I visited the city of Melbourne with a few friends. I guess the trip to the Blue Mountains gave me some confidence to go on a road trip to Melbourne, especially after I conquered my fear of staying at a hostel, but the trip didn’t really go as I expected. I’m not going to go into details but I do want to offer some advice based on what I’ve learnt and what could’ve been prevented on this trip to Melbourne.

Before I went to Melbourne, I didn’t realise that some of the people I was travelling with were very unorganised unlike myself and that caused a few problems and I didn’t really end up seeing much of Melbourne at all because of that.

I would definitely say it’s important to at least have a rough idea of where you want to visit and what you want to do on each day.

This is definitely something I should’ve made sure of; it definitely helps to avoid disappointment if everyone is on the same page and everyone agrees on what you want to get out of the trip.

Of course, it’s likely that something will go wrong and it’s better to have a backup plan in place rather than waste time running around like headless chickens, trying to sort out an alternative.

Those are a few tips I have, it probably sounds like basic advice but trust me, even the simplest of plans can go wrong if these things aren’t done. Have fun travelling!