Cycling in the Netherlands

If there is one thing I love about the Netherlands is the fact that everyone here cycles! Cycling is so ingrained in the Dutch culture, that saying something bad about it here would probably lead to you being kicked out of the country. The Dutch have even taken cycling to a whole new level, a couple of years ago, by opening the world’s first suspended bicycle roundabout (it’s quite impressive:

http://twistedsifter.com/2014/01/hovenring-worlds-first-suspended-bicycle-roundabout-netherlands/). So if you are planning to live in the Netherlands, be prepared to ride a bike, if not daily, at least occasionally.

Buying a new bike can be quite expensive, with prices ranging from €250 to €900, and even more depending on the 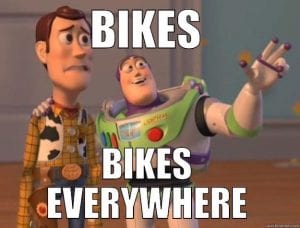 bike. But who needs a new one when you can easily buy a second-hand bike? For students and for those of you who don’t want to invest too much in a bike, especially if it is going to be used only for a short period of time, this option is the best one. There are plenty of second-hand bike shops in the Netherlands, where you can purchase quite good bikes for only €90-€120. If you are looking for something even cheaper, you can always check the “buy/sell” groups on Facebook. There are plenty of people selling reasonably good bikes for €70-€90, or even less. Just be careful when buying the bike not to get into a trap and buy a bike that has been stolen or pay too much for a broken one.

For those of you who are just planning to visit the Netherlands for a couple of days, there are bikes to rent usually in every train station (you’ll find them for sure in the big cities – not completely sure about the smaller ones). When renting, there is a deposit that needs to be paid (usually around €50 per bike), which you are getting back when returning the bike, and the actual rental price does not surpass €10-15 euros per day. The bikes that you rent are usually quite good and are the perfect way to travel around a city and help you tick off your list all the important touristic attractions.

The good news about cycling being so popular in the Netherlands is that bike paths are everywhere, which makes it easier to find your way around on your bike. The bad news about it is that there are so many cyclists that ending up on the wrong path can really be a problem. Also, drivers here are quite aware of cyclists being everywhere, but that does not mean that accidents do not happen. So in order to avoid any unpleasant situations, make sure you familiarize yourself with the traffic regulations before starting cycling in the Netherlands. A brief and useful guide in English can be found here: http://www.holland-cycling.com/tips-and-info/safety/traffic-rules-and-regulations-for-cyclists .

When arriving in the Netherlands you will instantly see that there are lots of spaces properly set-up for parking bikes. If you’re a student, your university will definitely have a big bike shed somewhere underground. When these spaces are not particularly handy to use or are lacking, it is not uncommon to park your bike in the street. However, make sure that you are parking it in a space that does not block the way for anyone and that this is only for a short period of time. If you’re not using your bike for a longer period of time, then it is better to find a proper space to park it in. Also, please don’t be one of those ridiculous people who park their bikes almost on top of the others or right by the entrance into a bike shed, not allowing anyone else to take in or out their bikes.

Since bikes are so popular here, it is no surprise that some nasty people are trying to make a profit out of it. Lots of bikes are stolen every day and sold afterwards either on Facebook groups or simply in the street. Be aware of this when buying a bike! If you are caught with a stolen bike, you get a police report. So think twice before throwing €30 to that man who offered you the best bike deal you can find out there. Also, in order to avoid having your bike stolen, make sure you get good lock and lock it carefully all the time. You’d be surprised how many bikes are stolen simply because the owners did not take the time to actually lock it the way they are supposed to be locked. Most people use multiple locks, combining usually a Dutch lock (the small one that blocks the back wheel) with a chain one or a D-lock. No matter which one you choose, make sure you are actually using it every time you leave your bike unsupervised in a public space.

With all these in mind, you are ready to go! So me and my new beloved two-wheeled friend Rusty (yes, of course I named my bike!) wish you safe trip and enjoy the ride! 🙂 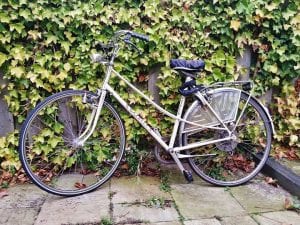