Last Saturday morning I was on a coach heading up the east coast of South Island north of Christchurch and stopped for a coffee in the small coastal town of Kaikoura, a popular tourist destination for whale watching trips. Little did I know that just over 36 hours later the town would be completely cut off from the outside world as a result of one of the largest earthquakes in New Zealand’s history.

Fast forward to Sunday night and I was fast asleep in a tent following my first day of walking the Abel Tasman Coast Track. I was woken up just before midnight by a possum which had managed to get into the porch of my tent and was rummaging through my rubbish bag looking for the remains of my dinner. After scaring it away I was just getting back to sleep, when just after midnight I was woken again by the ground beneath my tent shaking violently for around a minute, as though I was in a boat on a rough sea despite being on solid ground. At the time I didn’t think that it was a particularly strong earthquake and was excited, as feeling an earthquake had been something I wanted to experience whilst in New Zealand. I went straight back to sleep and it was only when I woke up the next morning and turned on my phone to loads of messages from friends and family back home checking if I was okay that I realised quite how major the earthquake had been.

The magnitude 7.8 earthquake is one of the largest earthquakes that New Zealand has experienced in the past 100 years, but thankfully the damage caused was lower than that of the Christchurch earthquakes in 2010 and 2011.  However, 2 people sadly lost their lives in this earthquake. The earthquake occurred by rupturing of multiple faults spreading northwards from the epicentre, shown by this simulation from GNS Science. Damage caused by the quake was widespread across the north east of the South Island and the southern part of the North Island including capital city Wellington. The most notable effects of the quake were around Kaikoura, where landslips have cut off several major roads and a railway line severing a key connection between Christchurch and North Island and cutting off Kaikoura from the outside world. Hundreds of people have been evacuated by air and sea, the only ways possible when road access was cut off. The coastline around Kaikoura has also been altered due to uplift along the shoreline, dramatically altering this renowned coast permanently, shown in this video.

Whilst the impacts of the earthquake weren’t major in the area where I was at the time in the north west of South Island, they were still evident. The Abel Tasman Coastal Track which I was walking last week had a few landslips asa a result of the earthquake and heavy rain which followed it, partially blocking the track and making the walk a bit more challenging. 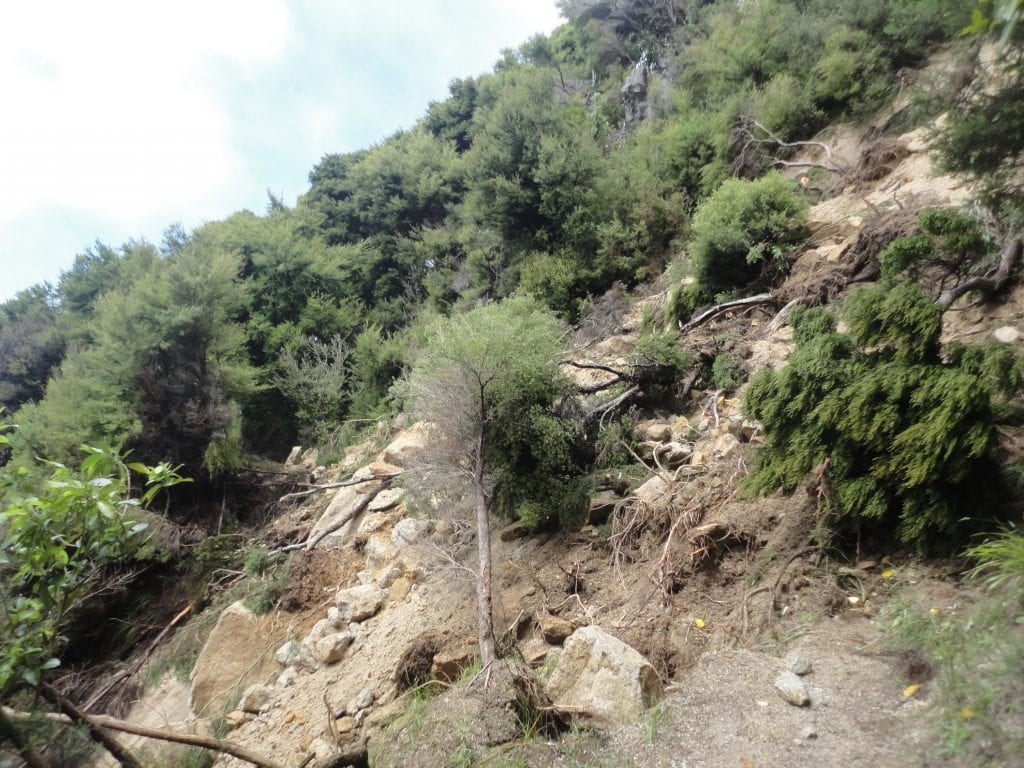 A landslide blocking most of the track

I was also worried about being stranded away from Christchurch, as the coach I was due to travel back on runs along State Highway 1, the road along the coast which has been blocked by landslips. Thankfully, by the time I was due to return a week after the earthquake a diversion route had been set up and I managed to make it back to Christchurch as planned. I have been impressed by New Zealand’s resilience and how they’ve tried to return to normal almost immediately after the event.

Aftershocks have continued all week following the first earthquake in the early hours of last Monday morning. I felt a few of them in the days following on from the first quake. By far the strongest aftershocks I have felt however were yesterday evening, when several aftershocks up to magnitude 5.7 occurred in quick succession just after 6pm. I was back in my 3rd floor flat in Christchurch at the time and the shaking felt a lot more intense than when I was in a tent for the first earthquake. The whole room was shaking and the door was rattling in its frame for around 30 seconds before returning to normal. Throughout the course of the evening I felt about 10 quakes in total, although most of them were only small.

When I wanted to experience an earthquake whilst in New Zealand I wasn’t expecting it would be one quite this big, but it all adds to the excitement of living in this amazing and geologically active country. Hopefully there won’t be any more big earthquakes during the rest of my time here.