Posted by Joseph in Study Abroad on December 2, 2016

There’s no escaping the fact that geology is all around us and New Zealand is a perfect example of this. But aside from the mountains, glaciers, volcanoes and earthquakes that the country is well known for there are a few more unusual geological features which I’ve come across on my travels so far.

Located in Tasman Bay on the north of the South Island, it’s fairly obvious how this distinctive granite boulder got its name. The spherical boulder has been split in half giving it the appearance of an apple which has been split down the middle. 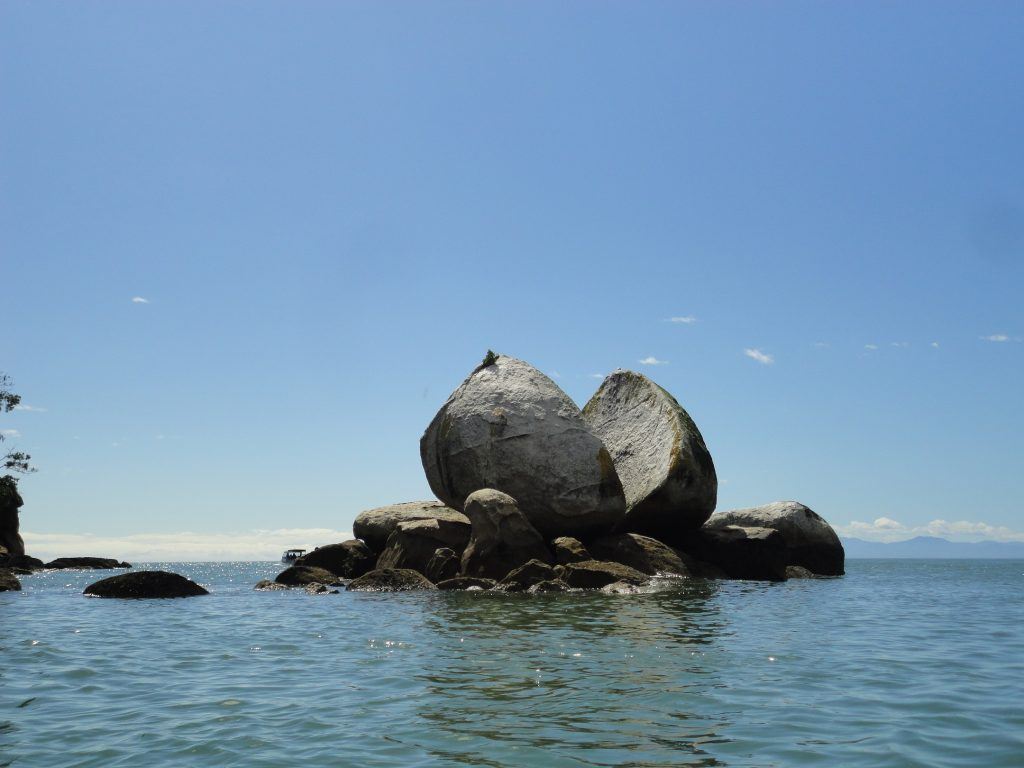 The geological explanation for how Split Apple Rock ended up split is that water got into a fracture in the granite during an ice age and froze. The expansion of water as it turned to ice widened the crack and caused the rock to split in two. There is also an alternative explanation in the form of a Maori legend, which states that two gods were arguing over the rock so split it in half to settle the disagreement. As the rock is in the sea the best way to see it is by boat, which is exactly what I did and visited it by kayak. 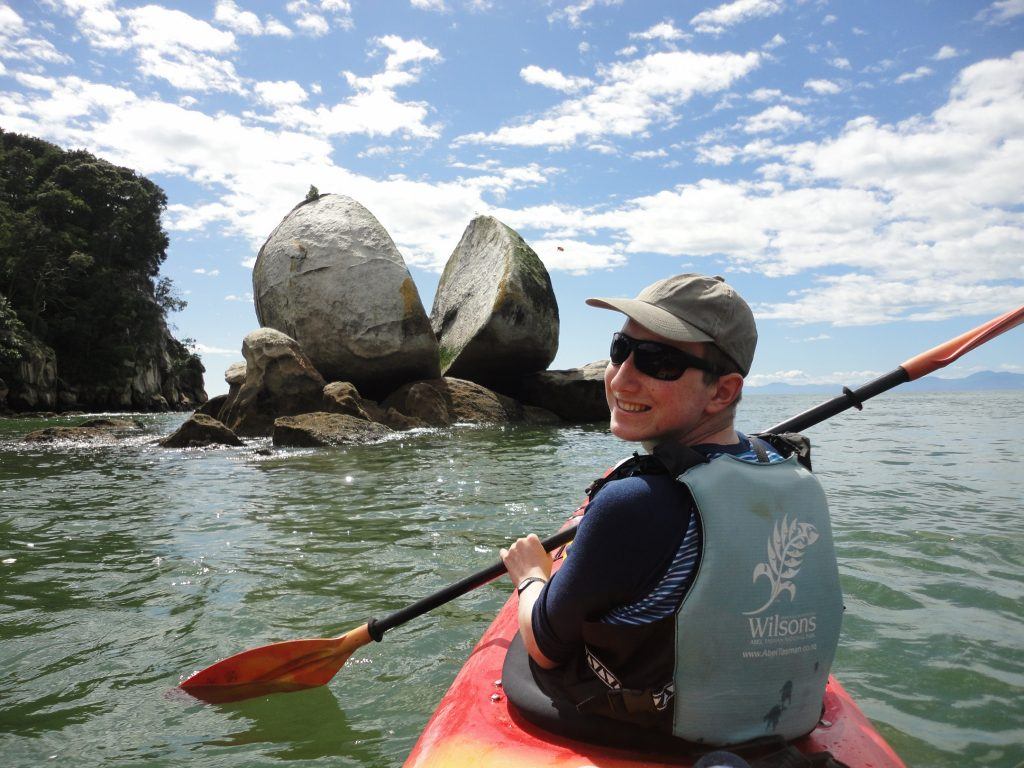 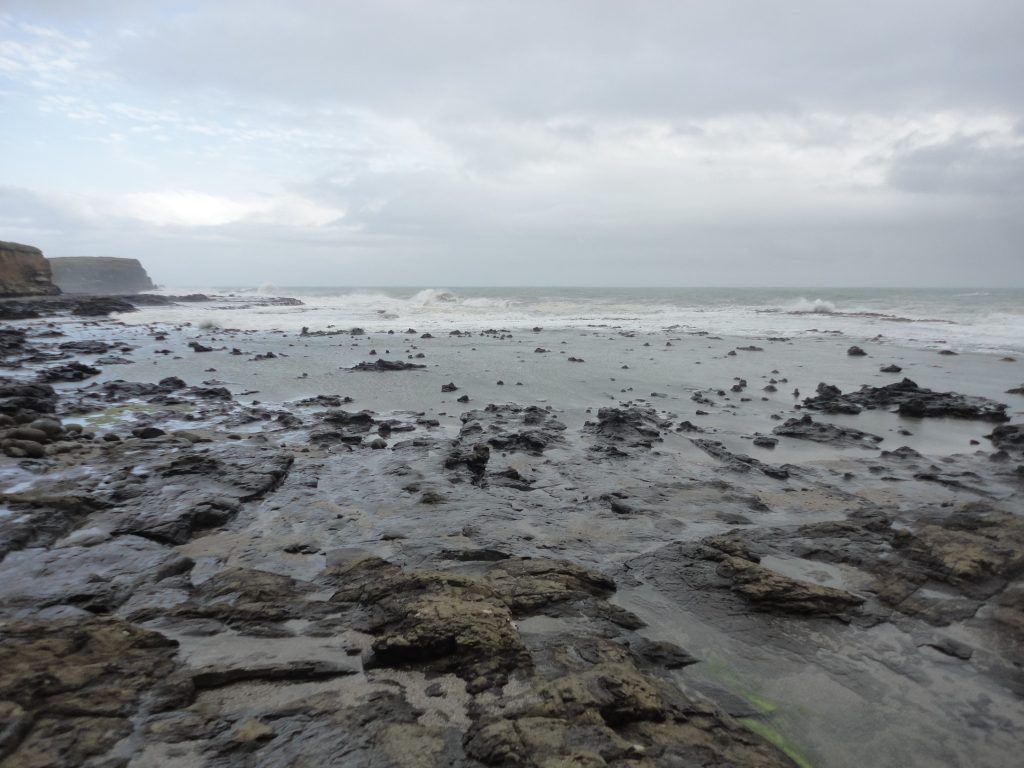 If you look closely at the rocks on the beach, you might think they look a bit like tree stumps. That’s because that’s exactly what they are. The beach at Curio Bay is a rare example of a petrified forest from the Jurassic Period. Around 180 million years ago, a forest was buried by volcanic mud flows knocking down the trees and causing the logs and stumps to be preserved and gradually replaced by silica. This hard preserved forest material has been exposed as the cliffs have been eroded by the sea, leaving the beach covered with fossilised logs, tree stumps and leaves. 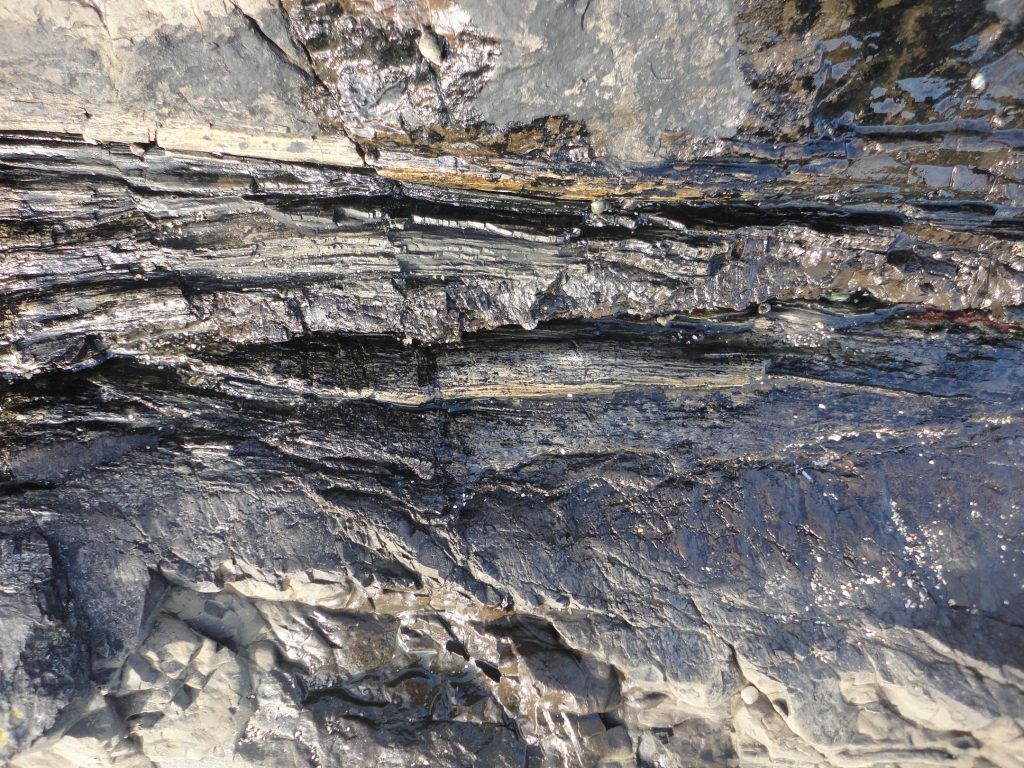 A petrified log on the beach (I’ve been a bad geologist and not included a scale in the photograph, its about 0.5m across)

Curio Bay in The Catlins on South Island’s south east coast is also home to a colony of yellow-eyed penguins (also known as hoiho). These are the rarest of penguin species and are found throughout the coast of New Zealand. Whilst I was there I saw 4 penguins coming ashore in the evening to return to their nests after a day of fishing. There’s something quite exciting about seeing penguins in the wild, something you can’t do in the UK. 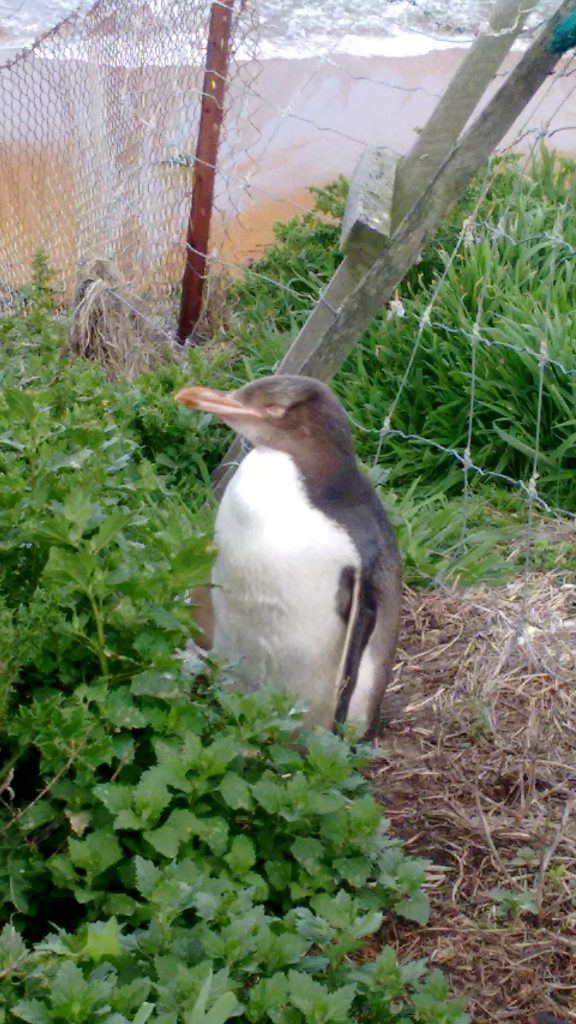 The penguins at Curio Bay were too far away for me to get a good picture and penguins don’t show up very well against a dark grey rocky background. Here’s one I saw much closer a bit further along the coast at Katiki Point (taken with maximum zoom on my phone, I wasn’t as close to it as it looks)

These boulders on the east coast near Oamaru are definitely an unusual feature. The beach at Moeraki is littered with these large spherical boulders around 2 metres in diameter, making it a popular tourist attraction. 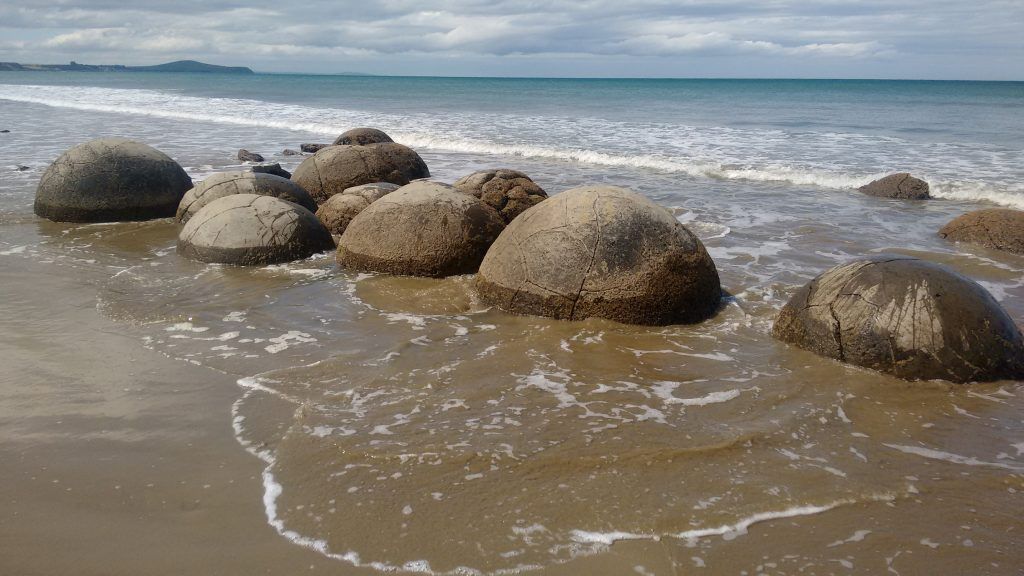 The beach is covered with these unusual boulders

The boulders are calcite concretions which have been eroded out of the mudstone cliffs which are less resistant to erosion than the boulders. These concretions formed on the seafloor around 60 million years ago by crystallisation of carbonates around a nucleus, slowly building up the large boulders. 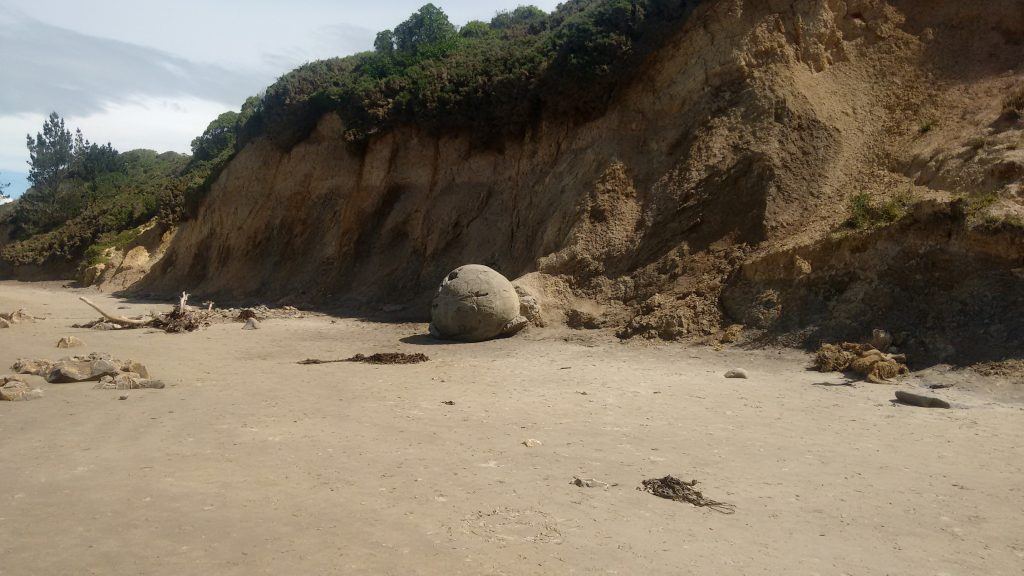 Erosion causes the boulders to emerge from the softer cliffs

There is also a Maori legend which explains the boulders as food baskets washed ashore from a wrecked canoe with a nearby headland representing the petrified hull. 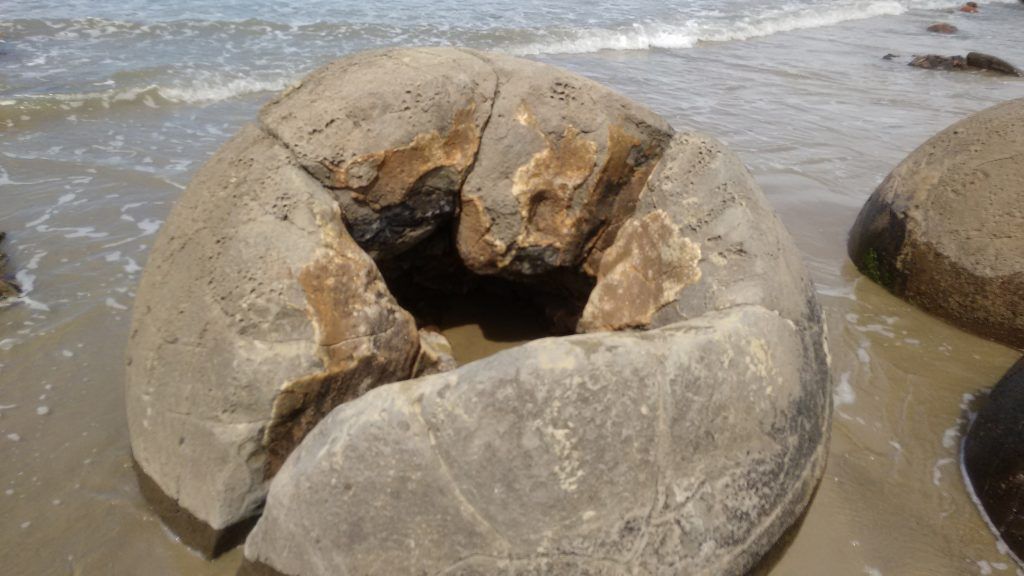 Some of the boulders are split open

Similar boulders are found a little bit along the coast from Moeraki. These are also concretions which are commonly formed around fossils, including one of the most complete fossil reptiles ever found in New Zealand. This 7 metre long plesiosaur is now on display in the nearby Otago Museum in the city of Dunedin. The boulders here are embedded in the sandstone wave-cut platform rather than in the sand, giving the beach an interesting landscape. This beach is less well known and less popular with tourists so when I was there it was just me and a few seals. These boulders also form part of the food cargo from the canoe in the Maori legend explaining the Moeraki Boulders. 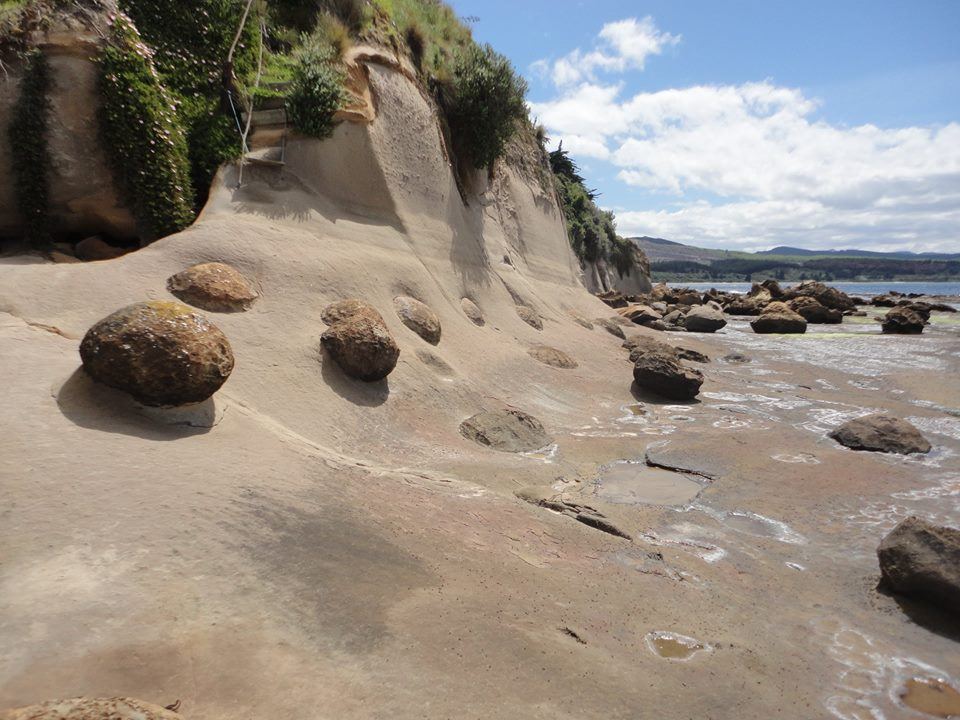 Boulders embedded in the cliffs and across the beach

I hope you’ve enjoyed learning about these unusual geological features. Hopefully I’ll write a part 2 when I come across some more interesting rock formations during the next few months as I travel more around this amazing country.