Due to its location on a tectonic plate boundary New Zealand has its fair share of geothermal features spread across the North Island. These are created as water is heated by hot material below the ground and finds its way to the surface through cracks in the Earth’s crust. As I’ve been travelling I’ve visited several of these unusual features.

The first geothermal feature I went to was Hot Water Beach, found on the Coromandel Peninsula on the north of North Island. Hot Water Beach is exactly what it says on the tin: A beach with hot water. The water bubbles up from an underground spring beneath the sand so when the tide is out you can dig yourself a natural spa pool in the sand. The hot water is far too hot on its own, but you can mix it with the cold sea water to create a pool of water which is the perfect temperature to relax in. This unique aspect of the beach alleviates the age-old problem of going to the beach and having to swim in a cold sea. If you didn’t know about the beach’s natural hot tap you might be a bit confused by the crowds of people clustered in one small area next to a wide expanse of beach, this is because the hot water is only found in a narrow section and the rest of the beach only has cold water. When I visited low tide was at around midnight, making visiting the beach an even more interesting experience. I wouldn’t normally go to the beach in the middle of the night, but when the beach is this unique then it’s worth making an exception.

Rotorua in the central North Island is geothermal capital of New Zealand, with several geothermal areas within easy reach of the town centre. It’s not hard to notice this as clouds of steam can be seen rising from various places and the whole town has a distinctive rotten egg smell (caused by sulphur) that is hard to escape and earning the town the nickname of Rotten-rua. The town is also called Roto-vegas as it has attracted lots of tourists for many years and was one of the earliest tourist attractions in New Zealand. 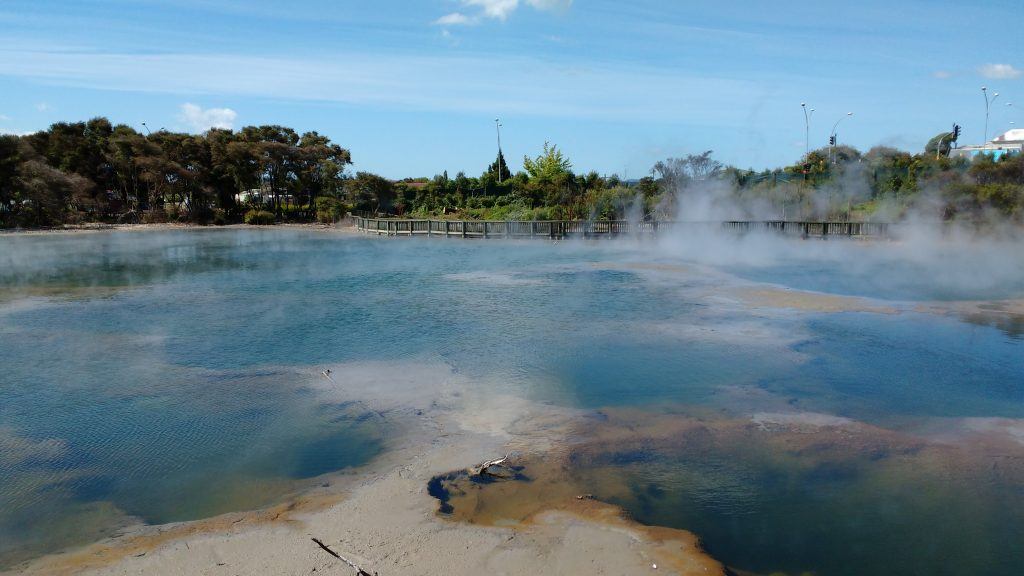 A steaming pool in Kuirua Park, right in the centre of town 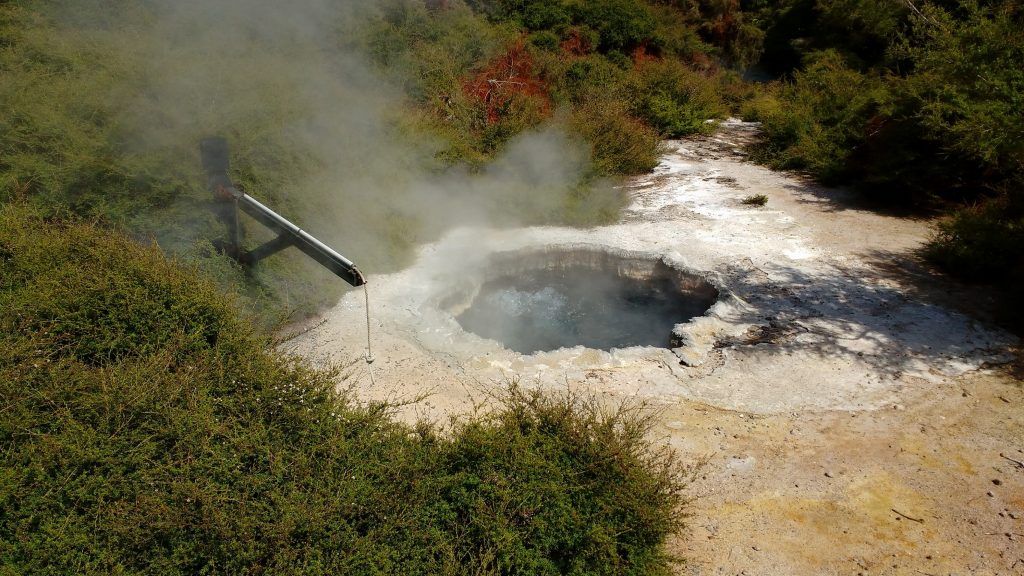 You can even have an egg boiled in one of the hot pools at Te Puia. The eggs are placed in a bag and attached to the end of the arm, which swivels round into the water.

As well as countless bubbling and steaming pools (the bubbling is usually caused by bubbles of gas rising to the surface rather than the water boiling, even though it looks like a boiling saucepan) the Rotorua area also has a few geysers including the Pohutu Geyser which is the largest active geyser in the southern hemisphere, and the Lady Knox Geyser which is induced to erupt once daily for tourists by adding soap to break the surface tension of the water. 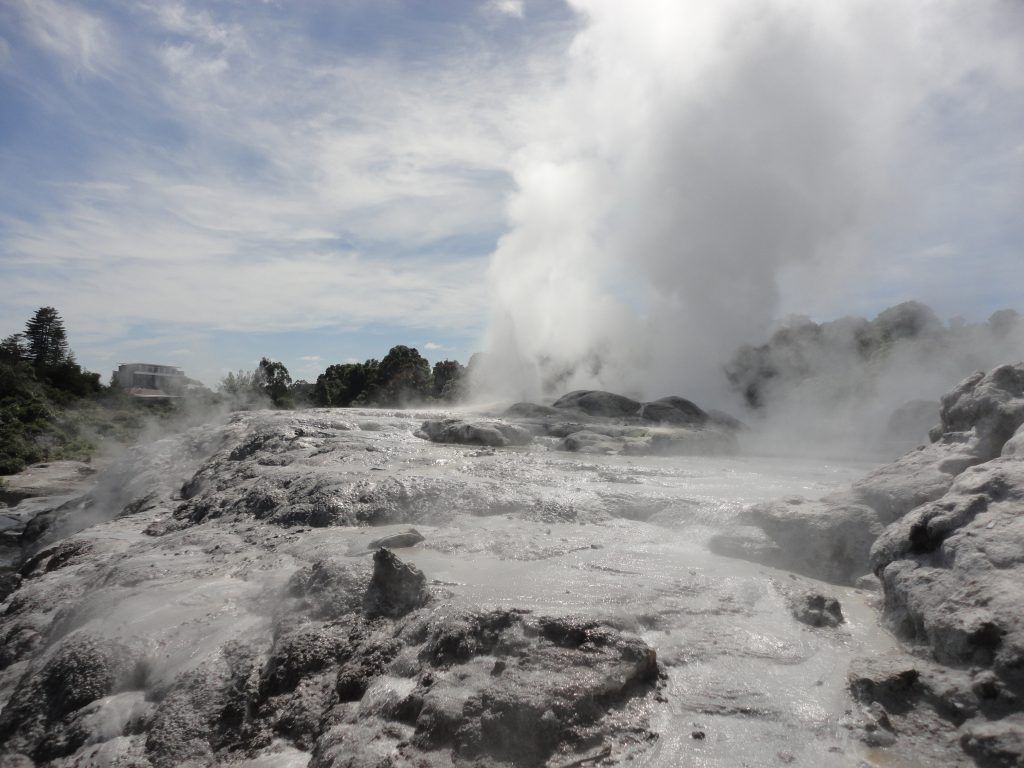 Pohutu Geyser, which erupts a few times an hour 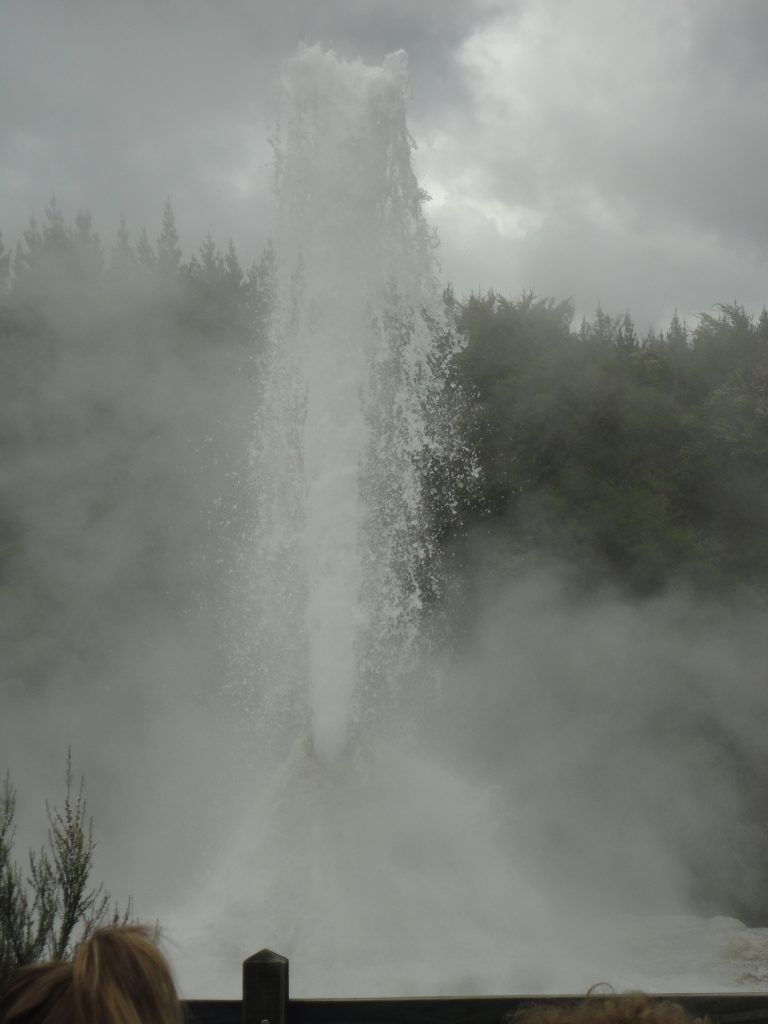 The Lady Knox Geyser is within the Wai-o-Tapu (meaning “sacred waters” in Maori) Thermal Wonderland, a park with a collection of geothermal pools of various colours created by different minerals in the waters. My personal favourites were the bright green “Devil’s Bath”, the green and orange “Champagne Pool” and the “Artist’s Palette” which has a range of colours created by mixing of water draining from other pools.

(Left to Right) Devil’s Bath. Champagne Pool and the Artist’s Palette with their distinctive colours

Nearby is the Waimangu Valley which has one of the youngest geothermal areas in the world, created by the 1886 eruption of Mount Tarawera. Frying Pan Lake within the valley is the largest hot spring in the world and is just one of many features in the rift valley which is created by a series of connected craters from the eruption. 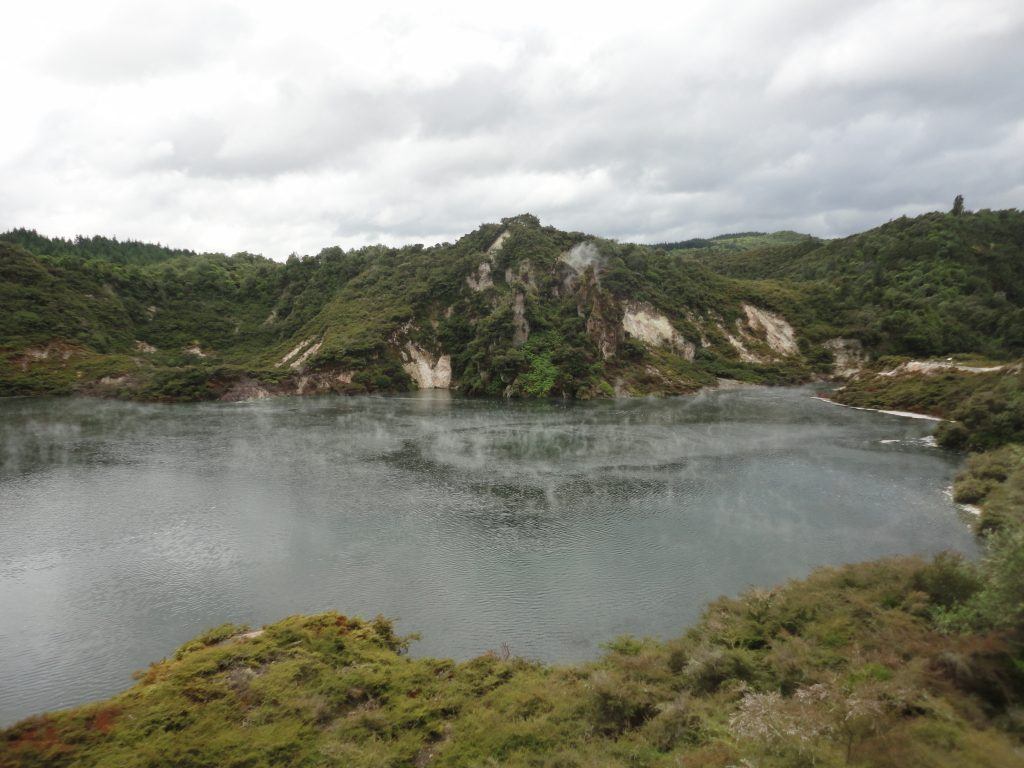 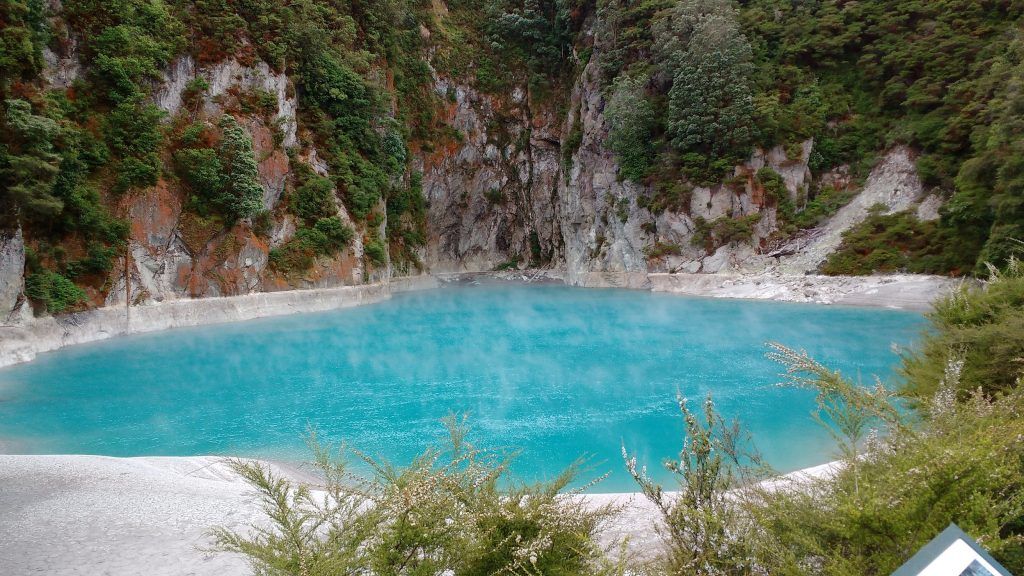 Taupo, about an hour south from Rotorua, also has some geothermal features. Spa Park in the town is an unusual feature where a hot stream flows into the cold Waikato River. Where the two water flows mix this creates a perfect bathing area enjoyed by locals and tourists alike. Similarly to at Hot Water Beach, you can control how hot the water is. For hotter water simply move closer to the waterfall where the hot stream enters the river and for colder water move further away.

Also close to Taupo is Craters of the Moon, an apt name for the alien landscape of steaming vents and bubbling pools of mud. Walking through the park is an eerie experience which could be likened to being on the moon. 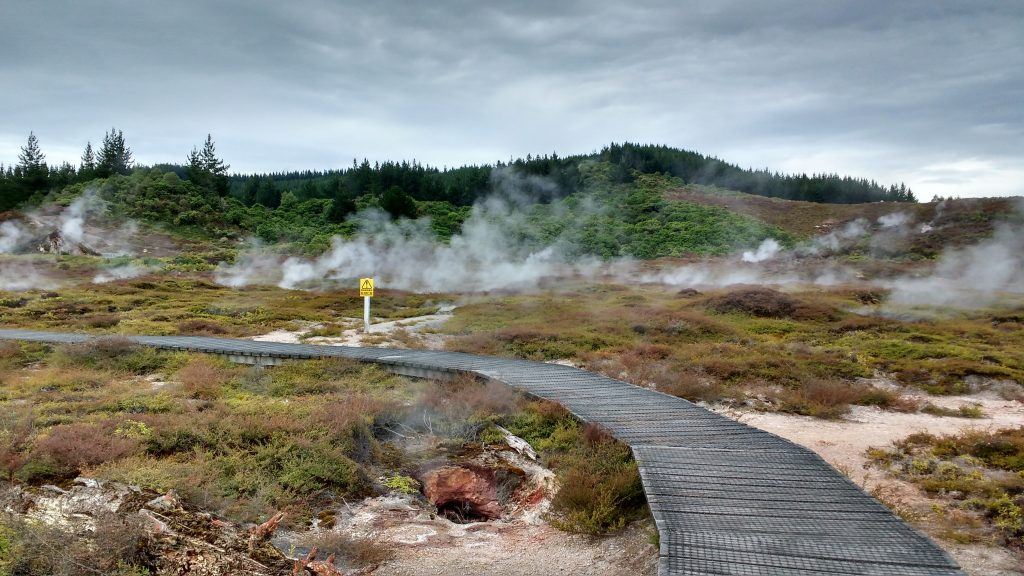 The unearthly landscape at Craters of the Moon

New Zealand is one of only a handful of countries in the world with such extensive geothermal activity. I found visiting these areas an exciting experience. Plumes of steam rising from the ground and bubbling mud pools aren’t something you see every day!